Alan was up at around 5am due to a dawn chorus from the birds, I could hear the camera clicking while I was still tucked up in Winston's penthouse bedroom.  Eventually surfacing to hot coffee at around 6:30 I fumbled around trying to get my brain cell working in preparation of the day ahead.  More tarmac and about a 250 km drive ahead of us we packed up Winston and were on our way by around 8:00 a.m. On closer inspection of the map I found a dirt road and it was a short cut to our destination too, this would liven up the drive for both of us.  We are heading for a what looks like a town called Tom Price.  Thinking this is a very strange name for a town I browsed all the literature I have with us to see who Tom Price is but there is nothing but the name mentioned.  This is one for the Internet when I next get a connection I think.

What the heck is this, on a dirt road and we come across the first traffic lights, we have seen since leaving Perth - talk about finding things in the middle of nowhere.  It turns out there is a large mining concern here for iron ore and the traffic lights are to stop you being smashed into by the road trains. 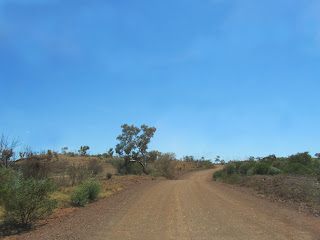 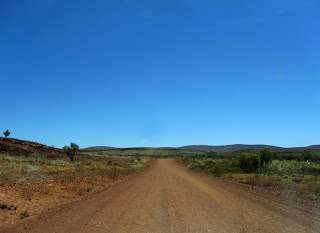 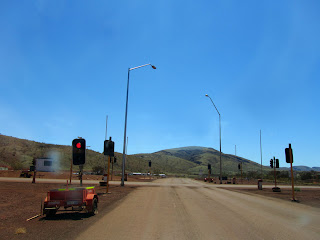 Tom Price is a place I have something to say about!!!!!  What a neat place in the middle of nowhere, manicured lawns, quite posh houses, Coles (a chain store supermarket like Tesco or Wall Mart), park with lots of trees and flower beds, hospital etc.  At the visitors centre is a sign saying how this mining company is 'revitalising the town'.  My blood is boiling, do the big companies think we are stupid?  This is Aboriginal land so who the heck is benefiting from the revitalising of this town in the middle of nowhere I wonder?  Possibly the white residents who have moved in due to the work created?????  Why, oh why do humans have to destroy this beautiful planet, scarring her, digging holes in her as if she needs radical surgery due to having one too many growths inside her.  I could cry.  Enough said.

On to the Karijini National Park where we are hoping to finds some spectacular photos of this rich red land against clear blue skies.  Traveling up a well graded road we see a sign for water.  Now this is great, we can fill up Winston's water carrying tank which is about 50 litres so can be rather lavish and have a shower.  It is a bit of a curfuffle but well worth it.  Alan rakes out the items in the way from Winston's rear end in order to find the hose which is tucked away in a cubby hole under the fridge, while I hunt for a plaster to fix our National Parks Pass which is falling to bits and won't hang on the rear view mirror any more.  All done, and we are on our way again.  First stop is the visitors centre, another map and 2 shots glass purchased and time now to find a camp spot for the night.

We found several so instead of setting up we decided to see what the circular pool is like, only a short walk by looking at the map. Right, a short walk to the viewing platform but one heck of a walk to the pool itself and at 2:00 p.m. far too hot for us to tackle. 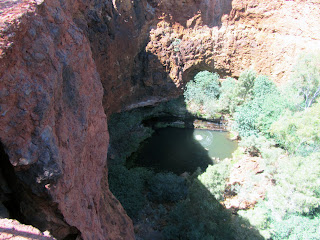 Hows this outside dunny and in a car park too :) 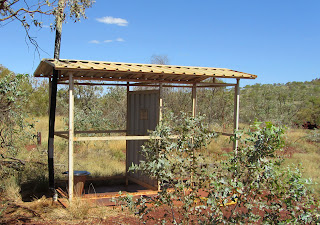 Back to hunt for a resting place and we find a nice quiet one with a tree for a bit of shade.  While relaxing and having a cup of tea Alan suddenly points to Winston's rear end, he sort of forgot to put the water cap back on the tank.  This means tomorrow we will have to travel about 55km back to the water tank to see if it is there.  In the meantime a blue plastic back will have to surface. 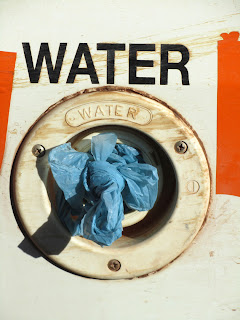 A quick picture or two here to show you what our solar powered shower looks like, busy heating up our water for tonights 'hot' shower and hair wash.  It is hung from a tree when the sun goes down and we can shower under the stars - heavenly. 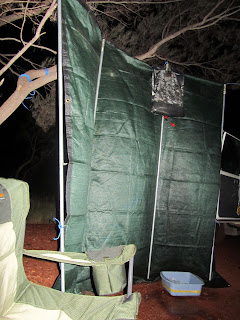 And to end todays blog a moonlight picture. 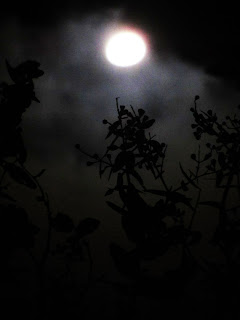