Once again Winston was packed up after we had our coffee and Marmite sandwich, yes our jar of UK proper Marmite  is still lasting <g>.  Heading further west we are aiming for the Stirling Range today, not a long drive but oh so boring, Fields of wheat, the sheep - some 'Shaun the Sheep' others still with their wooly coats intact, the odd fat cow or two and the dreaded tarmac road.

As the day progressed the skies clouded over, not a pretty sight but we knew there was a cold front blowing in and showers forecast for the day.

Now I have to mention Ongerup and the Ongerup Traders Roadhouse,  In search of a cup of coffee and our bacon and egg toastie this looked like a fine place to stop and how right we were.  Laura and Kevin were fine hosts, and Laura has a wicked sense of humour <g>.  Keeping in mind this adventure is about bush camping I thought a sneaky trip to a toiled with a toilet seat would be something fun to do.  On asking Laura if she had a loo, she replied; "Ah, that is the one thing we don't have, but there is a bush over there".  It is easy to see why I love OZ so much, most of the people seem to be on the same marginally normal wave length as me <g>.  After chatting for a while I mentioned we had not had seen or had a proper shower in almost four weeks.  Laura's face lit up, and she said; "You can have one just down there, they are new and free".  With the word free my ears pricked up, hot water too.  Against my principles for this trip I could not help myself, I got goosebumps at the thought of hot rain pouring down from the holes in the shower head and richly lathered hair revitalising itself before being treated to having all the soapy suds removed completly.  While Laura was cooking our bacon and egg toastie I was chatting with Kevin and mentioned the wonderful bacon and egg toastie we had had at Salmon Gums, so big we could not finish them.  Laura heard this and when she brought ours out, steaming hot and smelling wonderful she also gave me their business card and added she was sure her bacon and egg toasties would be even better.  Yes Laura, they were <g>  Alan and I devoured ever morsel with relish, totally yummy.  Thank you <g> xx 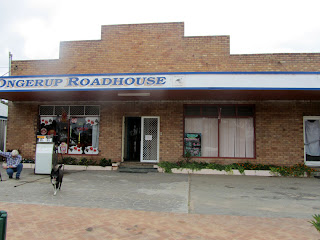 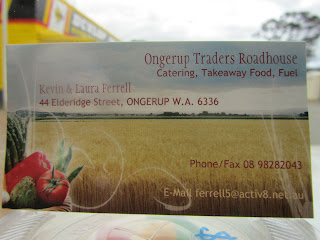 Now back to the shower, you are right Laura, showers at the Community Centre but alas they are not built yet so Alan and I moved on, not freshly shampooed as hoped but a little stinky, still feeling like the intrepid explorers we play at being.

We could see the Stirling Range before us even in the rain.  I imagine this is another stunning location if the cloud covering the tops was somewhere else for the day but today there was little to be seen, we parked up and waited for a while with hopes the rain clouds would move on but they didn't so we did.

We bypassed Albany on their ring road, not needing any supplies there was no need to negotiate hordes of people standing in cues at checkouts etc.  Alan has seen on the map that at West Cape Howe we should find the most southerly point of mainland Australia (although this might be of Western Australia, not sure at this point so will have to Google it when next on line).  Ah a small mistake, the wrong national park, we ended up in Torndirrup National Park.  Obviously Alan and Winston knew something I didn't. 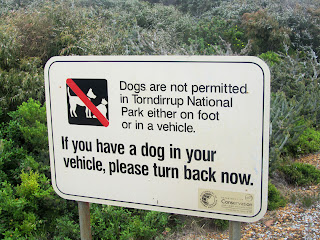 So I donned my homosapian cloak, Alan removed my leash and like an old couple we 'poodles' around investigating the wonders of nature.

First was a pretty and short walk to Salmon Holes, a bay where salmon pass by if I remember correctly. 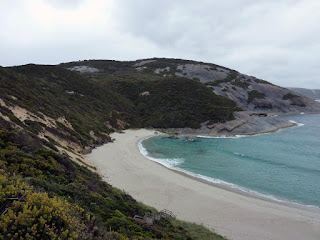 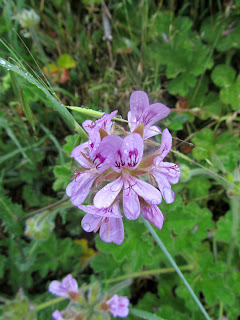 Next a walk up Stoney Hill.  Now this place was rather blowy and chilly but some beautiful views and a bit of history to add into the bargain. 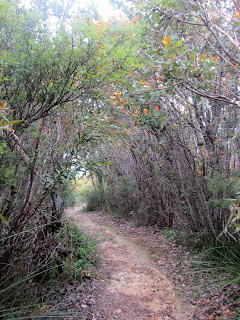 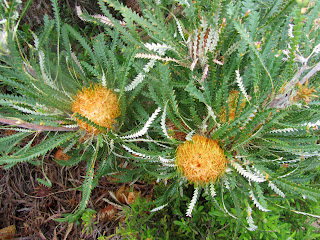 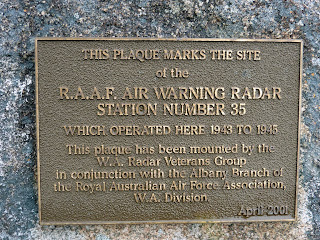 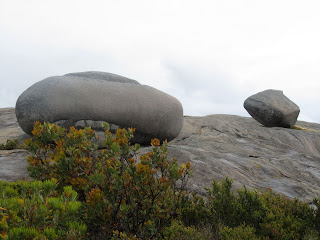 Saying as Alan had dragged me up Stoney Hill it was my pleasure to request we got out the car in the wind and rain to see The Gap and Natural Bridge at our next location.  This was a real case of been there, seen that and got the pictures to prove it.  Alan was laughing his head off, he had never seen me move so fast once the pics were taken to get back to warm, dry Winston. 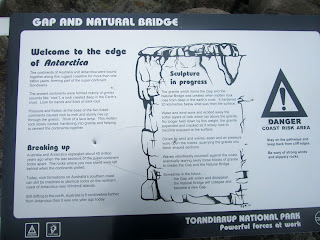 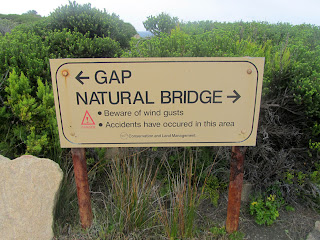 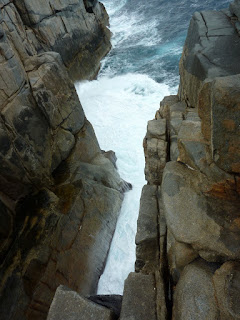 Listen to the wind at the Natural Bridge, it gives you some idea of what we were up against :) 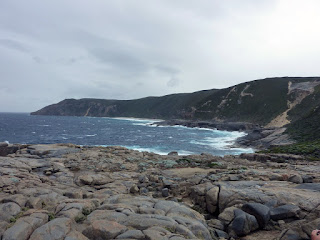 Once again the day was drawing to a close, and it was still raining :-(  Got to find somewhere to park up.  Now this is not so easy as it was further north, most of the land is taken and being utilised.  We ended up near Camp Kennedy - not Camp Kennedy itself as that is a private camp but a little further along down a track that said 4WD only.  A quick and minimalistic campsite was set up this time including our tarpaulin and wind breaker to give us some shelter from the water laden clouds that keep dropping their load on us.  Very pretty, this time we have a garden, lots of trees, flowers and a valley and hill to look out on.  When we wake up tomorrow morning with the sun shining (hows that for being hopeful <g>) I will take a picture.  I am wondering if Laura arranged this - the rain being our free shower :)