There is not much I can write about today.  We woke up and made the usual two cups of coffee each before sanity started to set in.  Thinking that some fresh fruit juice would be rather nice, we had bought a couple of cartons in Kalgoorie Alan got one out the fridge.  The usual problems of opening a tetra pack solved a large mouth full was swallowed.  Yuk, super strong, super thick, super sweet.  What is this we have bought, not regular fruit juice.  On reading the carton it turned out it was concentrate and needed to be diluted with two litres of water, no wonder it was horrible.

Last week we may well have gone to the trouble of diluting this juice to see if it improved the flavour but not now.  I didn't mention in yesterday's blog that when the two tyres blew we also lost Winston's air intake snorkel cover (the black pipe thing you can see near the drivers side).  The air intake snorkel allows Winston to go swimming without flooding his engine <g>.  This, along with blown shoes was not the only thing Winston suffered, his hose for the undercarriage water tank was also ripped from its fitting and while Alan was sorting the first puncture wheel change I was watching 40 or so litres of water drain from his tank.  This is the water we use for our showers, washing up etc., so not a problem when it comes to making a cup of tea but it does mean we will have to be dirtier and more smelly than normal and try to eat food that does not require cooking which in turn means washing up until we can get it fixed.

... and poor, limp, beaten up Winston was dragged onto the trailer.


With one last check of our campsite, just to make sure we have left nothing behind but footprints and wheel tracks we were on our way. 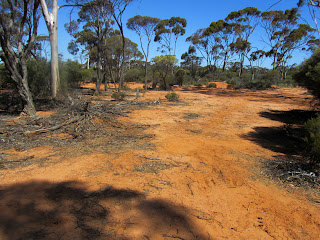 We were taken to Norseman, saving fuel for us as the insurance company had to cover the cost of the our retrieval to a place of maintenance, about 140km. 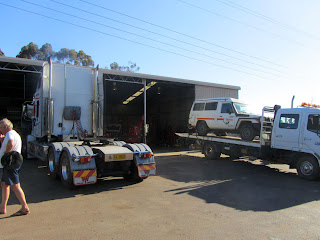 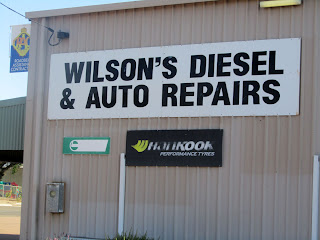 I thought it would be a wonderful opportunity to upload the blog while in Norsman but I can't find my modem.  It has to be in Winston's interior somewhere but no sign yet.  So sorry folks for the delay, I will keep hunting and in desperation will pinch Alan's tomorrow.  NOTE: - Nov 15th, modem found between the seats hidden under Alan's tripod mount, big sigh of relief.

With the work day ending, Winston got his new footware just before closing time and we were on our way again.  Now to find a bush camp before the sun sets as we are still refusing to pay for civilised accommodation on this vacation.

We did pretty well, the sun was setting with about twenty minutes of enough light to set up we found a resting place for the night by a salt lake.  The temperature dropped and the wind picked up so, chairs out, jumpers on, kettle on, wind-breaker set up all before it became dark enough for us to have to put on our little orange light.  We are getting pretty fast at setting up and taking down our bush camps.  Opting not to use bright white light unless we have to we use the orange light most of the time, it does not attract bugs like white light does and allows us to see the stars without light pollution.

What a beautiful starry night, so clear it was like a christmas tree, twinkling away.  Always on the hunt for shooting stars and trying to make pictures out of the stars, our evening entertainment began.  First one shooting star, then another and then a third, what a treat.  We then tried to find the Seven Sisters, I have a vague idea what the group looks like and think we have found it (although this could just be us making up pictures again <g>).  Last year we accidentally found the 'Saucer' but we also found the tea cup sitting on it which does not exist :)

Tonights blog ending sunset was taken through the car windscreen while on our hunt for a resting place to set up. 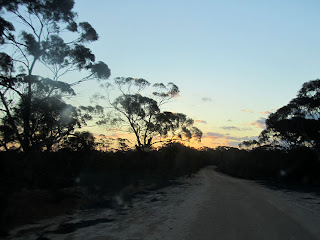