Now today is Sunday the 13th not Friday 13th although it could have been.  After a very restful night at Cave Hill and still planning on heading South we set off for a 50km drive back to the tarmac road, or at least that is what I thought was the plan.  Alan and Winston had been scheming and noticing there was another lake not too far away decided to head in that direction on old tracks.  What a beautiful drive, some of the land around us seemed untouched for years and the ever changing colours meant it was like driving through a 3D painting.  Talk about putting total faith in our wonderful outback sat-nav to find Lake Johnson, it took us on a very strange, exciting, eventful and mysterious adventure. 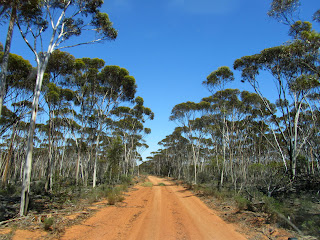 The track we were following got narrower. 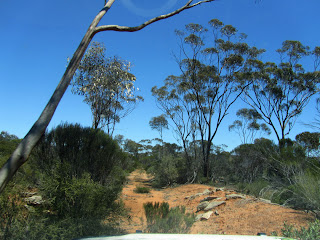 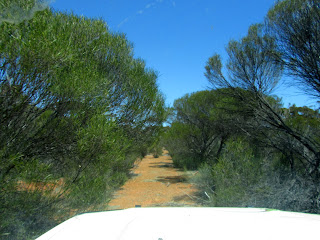 And narrower and then pretty much disappeared.  We had to drive around a bit to find where the track had become overgrown and get back onto it when - woooooooosh.  Have you ever wondered how to let a tyre down rapidly, it is easy, find a sharp piece of wood and drive over it.  This is exactly what we did. 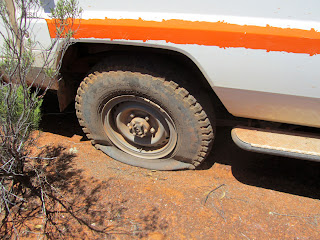 Now Alan has a passion for Toyota jacks, flimsy little things that just don't seem right to go with a heavy Land Cruiser. 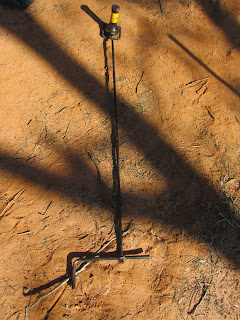 With no Barney to visit at Wiluna this time with his hydraulic jack we had to use this piece of equipment.  It does the job but makes you work hard and alas there was not much I could do to help but untie the stupid knot somebody had made around the spare tyre cover.  Alan put the jack here, it ran out of lifting threads, try again, would not fit in that place, try again, has to be the axel.  Now Alan was under the Winston digging away to make space to fit the jack while I watch on, not too happy to see Alan under the vehicle but what to do.  He eventually crawls out save and sound and matching the colour of the earth around us.  Crank the handle several time, remove the tyre and replace with it with the new one.  Well done Alan, good job all round.  Once Winston was packed up again we were on our way, very carefully, avoiding anything that looked sharp or removing the obstacle from our path as we went.  I should mention here, it is against all our principles to travel with only one spare tyre, something we never did in Africa.  Last year Alan tried to have this out with Britz whose only reply was they did not know where to fit a second tyre!!!! 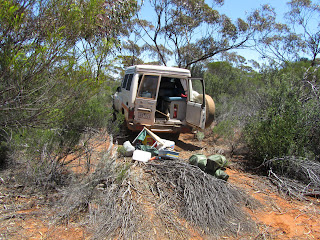 10 minutes later and a strange flapping sound, had we dislodged the non-existent rear mud flap - no, you guessed it, another flat tyre.  This was impossible to rectify having used the good tyre ten minutes ago.  Should be phone Britz, no point, they would not be able to bring new tyres and tubes to us here anyway. 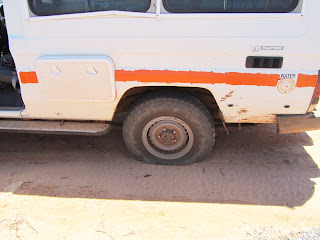 Only one thing to do, drive very very slowly (15 kph) to reach the gravel road.  Keeping an eye on the flat tyre which was giving as much rubber protection as possible to the rim we drove on.  30 kilometres later, the rubber had run out, totally shredded and no good to anyone.  Still not at the gravel road it was out with the dreaded jack again and replace the now shredded tyre with the other flat tyre which was still in one piece rubber wise. 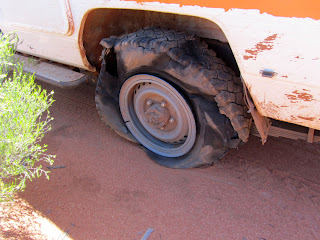 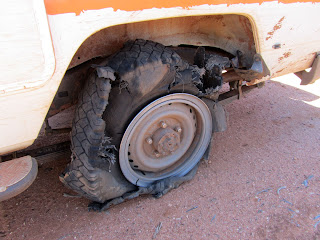 At this point, we did what any sensible Brit/Pom does, make a cup of tea <g>. 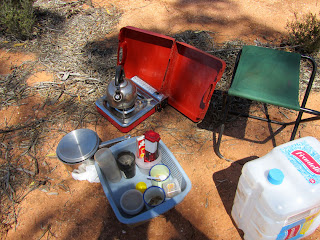 We were so close to the gravel road it is a shame the shredded tyre did not last a bit longer but our aim on this adventure is not to trash Winston but keep him as safe and comfortable as possible.

Safely at the gravel road and I had to laugh, we had just come off the side road and saw part of an old roof from a  Fort Popular or something similar with 'Cave Hill' written on it an pointing in the direction we had just come from - I guess we were on the old, un-used back track :). 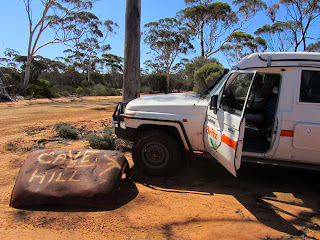 Time now to contact Britz.  Sounds easy, out with the satellite phone and call.  Now one has to raise the question as to why a freephone number is given which is not accepted by our phone in an area where mobile or regular phones do not work!!!!!  Is an off-road 4WD vehicle meant to stay on tarmac!!!  This makes me think of all the folks who buy 4WD vehicles and never use them for the purpose they were built (or hired for) !!!!!

Time to get all the Britz agreements out and search for a proper phone number, took a while but we located the Perth branch number and gave them a call.  OK, what was their first question, not are you OK but what is your phone number, in reply we gave them our GPS coordinates and said we would call them back with our number.  Blast, blast, blast - how often do you call yourself is my normal reply to that question to know your number off by heart.  Alan had to sign off with the call to rummage through the phones menus to locate it, OK, we should have written this down somewhere sensible on paper for just such an occasion, something we failed to do.  What the heck is going on, those flipping gremlins who stole our bread an tuna are at it again.  The menu we need on the phone is missing (Alan had pressed a key combination which locked it from view <g>).  I told you this should have been Friday 13th.

Now to back track a bit, Nikki had given me a real ticking off a couple of weeks ago for not giving her my OZ mobile number.  In replying to her via FB message I mentioned it would be more sensible if I gave her our satellite phone number as the mobile number would be out of range most of the time.  With my brain cell working at this particular moment I also sent the message to Natasha.  For those who read this and do not know, Natasha and Nikki are our daughters back in the UK. A quick call to Natasha, who had just woken up and was having her first cup of tea for the day (yep, 3:30 p.m. for us but only 6:30 a.m. in the UK).  It was rather fun chatting to Natasha and wee Jay from the middle of nowhere.

With the satellite phone number now written down on paper we called Britz back who then said they would pass the information onto road side assistance. The road-side assistance people have been great, their first question was, "Are you OK?", "No worries" was our reply.  The conversation then returned to the dilemma in question, our need for two new tyres and two new tubes.  They called us back about an hour later, "This make take a while, the person we have contacted does not have your tyre size in stock, we will keep hunting for you.  Are you OK to spend the night?".  Again, our reply of "no worries".

Time now to settle down for the night in our rather strange bush camp site :).  Don't think I have any regrets about today, I don't.  Our adventures are all about experiencing the unexpected, both positive when we find the beauty of the land we search for and the negative like today.  I believe, you only appreciate the positives when you also experience the negatives, and every negative can be turned into a positive anyway. Today we have had a experience which has only gone to further the respect we have for pioneers in the past, some of the feelings of being in an unknown area without immediate assistance and using ones own common sense to get to safety.  Following the very sound advice of never leaving your vehicle, that is exactly what we did, we took Winston with us to a safe place so he can receive his medical assistance <g>. 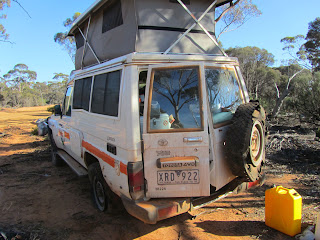 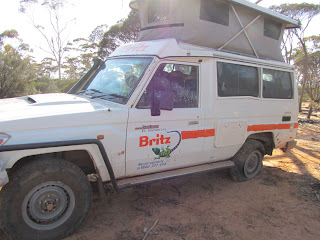