Oh so soggy, it rained again last night, at one time I must have been dreaming and spilt a whole jar of Jelly Bellys onto a hard floor, this woke me up enough to realise the sound was not of Jelly Belllys bouncing off the floor, but rain bouncing off Winston's head.  We hoped that was the end of the rain and the big blue skies would be returning and we were right as it turned out.  A good decision to pack up and move back to exploring OZ.  Still on a Westerly route, Perth is only about 450km away so we were not in any hurry to find the quickest route it was back our first mission of the day, was to hunt down an egg and bacon toastie again.  Packed up and off the sandy tracks it was up with Winston's tyre pressure and onto tarmac.


Now it was not long, maybe only about 15 minutes when we saw a sign for 'The best coffee', would that also mean a bacon and egg sandwich we wondered.  This best coffee place was in a small village called 'Cosy Corner'.  With a name like that it defiantly needed our attention and we turned off the main road to investigate.  Oooooooo and glass art gallery, 'Torbay Glass Gallery', yep, forget the coffee for now and check out the possibility of purchasing some art work as our holiday pressie to ourselves.  What a dream business, I could quite happily remove their glass work from their studio and set it up for my cards <g>.  Big glass windows letting in so much light with views of trees etc when looking outside.  Although they had neighbours you could not see another building no matter how much you hunted.  We chose a couple of lovely pieces (now they are going to have to travel as hand luggage and this is a problem I will solve later but don't know how.  All the camera equipment also has to travel as hand luggage along with the laptops and oh so heavy).  I can't show you a picture of what we bought because by the time I thought of it everything was bubble wrapped so instead here are the pictures of where our newly purchased prizes were on show <g>. 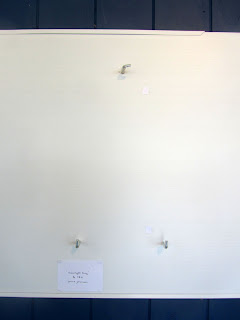 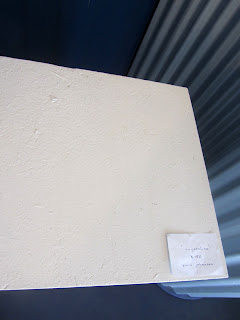 Mark Hewson and his wife Paris Johansen both design in all things glass, stained glass work, glass etching, kiln formed glass etc.  Their work was stunning and it was so hard to choose.  The pieces we chose were not signed so that was arranged for us, unfortunately Paris was not well so her hubby Kevin did the honours.  Then it was out to the verandah for a free cup of coffee and a chat.  Bless Kevin, he offered to sponsor our entry into OZ if only he could afford it <g>.  Mark told us of a funny story as to why he and his wife do not share the same surname.  They have been married for 32 years and his wife has won numerous awards for her work.  On more than one occasion, while being called up to collect her prize the announcer has called her by her wrong name and in the end, getting rather peeved with this she changed her name to Paris Johansen, saying that they could not get that wrong <g>.  The name does have connections with her past but I can't remember what they are. 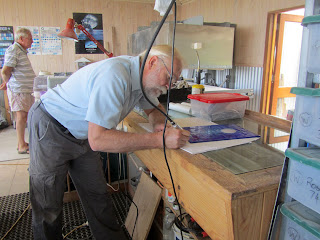 Now, the other day, while trying to find the most southerly point of Australia/Western Australia we ended up in the wrong park and running  out of time stopped over for two night somewhere else.  It turns out we were just round the corner from where we wanted to be.  From Cosy Corner on Torbay Hill it was 8km to, what we now know, is the most southerly point of Western Australia.  Got to go get the picture <g>.  What a drive, it was into West Cape Howe National Park, down with the type pressure again and what a ball Alan had, this was the most challenging drive for Winsotn this trip.  Steep sandy tracks, tight corners, deep ruts etc - fun, fun, fun. 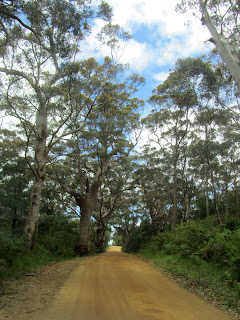 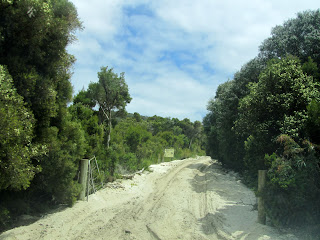 We had only entered the park a 100 metres or so when we had to reverse out to let another vehicle escape, then it was on our way again.  In the 8km trek to the end of the track we only saw about 3 passing places.  What a blessing on some of the steep inclines that rubber mats had been laid sometime in the past or this place would have been inaccessible. 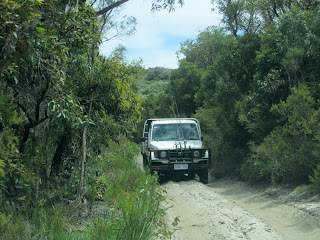 With 75 metre sheer cliff edges and waves pounding the sides, big blue skies and a cool breeze we stood/sat at the most southerly point of WA absorbing the most wonderful mixture of colours and sounds. 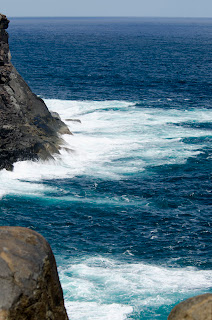 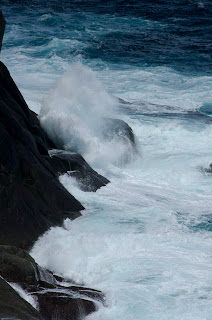 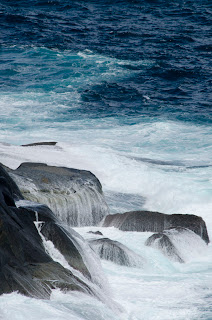 Still no bacon and egg toastie to satisfy our grumbling tummies we left the park in search of grease <g>.  A little shop east of Denmark sated our hunger.  Moving onto Denmark for some more water etc I also picked up a bag of sweeties in the IGA store.  They looked interesting, I had no idea what they were and always looking to try something new thought they were worth purchasing.  How disappointing to find they were made in the Netherlands, well I guess it is only a short hop from Holland to Denmark <g>.  The sweeties were not bad, a sort of mixture of honey and liquarish in case you are interested.

Driving around is very reminiscent of East Australia when we arrived last year, tall straight trees creating a very pretty, tree lined avenue to drive on.  We were very close to what the Lonely Planet describes as one of the top 10 must see places in OZ so we will go and have a look, can't come all this way and miss a major attraction.  The Valley of the Giants, big trees and a tree-top walk.  Now a place like this also deserves the purchase of a shots glass or two <g>.  Nice staff, very pretty but the trees were not that big, we have seen far larger in Ghana so that was somewhat disappointing.  What was surprising was the lack of birds in the canopy.  Would I do it again, I don't think so.  It was a clever bit of engineering that created the tree-top walk, a suspension bridge thing forming a 3D kite shape with the highest point 40 metres above ground.  I don't like heights at the best of times and although I know suspension bridges are safe they make no sense to me, hanging structures from steel cables to allow you to walk (or in most cases drive lorries across) seems rather precarious to my brain cell.  This bridge contraption bounced and quivered under foot (I think Alan was deliberately jumping on it to see what I would do <g>). 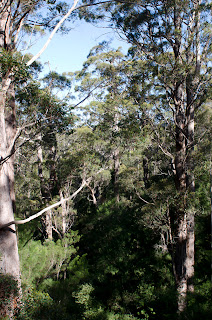 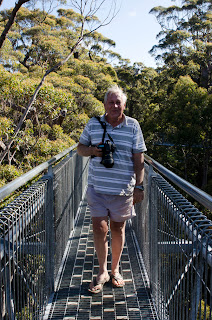 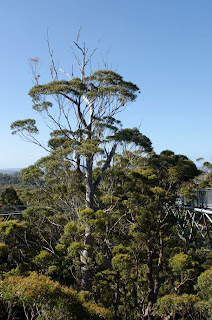 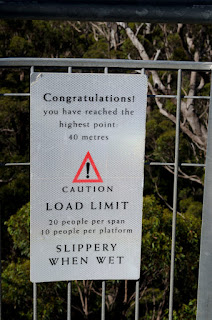 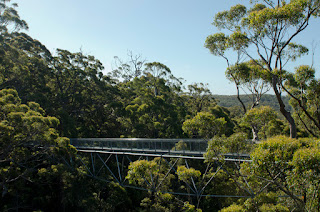 After completing the circut and returning to ground level we decided to make the most of the 11 bucks each we had paid to enter and check out the ancient forest walk.  Alas, only holf way round and loud speakers hidden in the trees informed us the place was closing so it was back to Winston feeling a little disgruntled at being kicked out.  It was obvious Winston was feeling the same, he put his foot down, quite literally, with yet another flat tyre!!!!!!!! 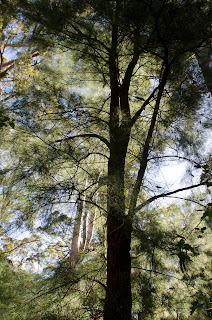 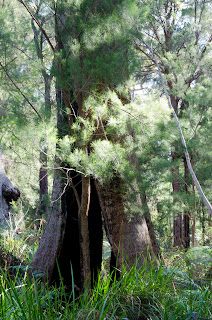 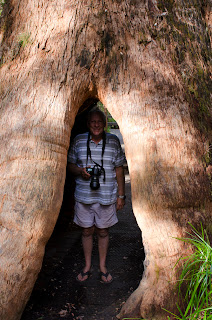 Still on our mission for free camping and finding it harder and harder in the populated west end we cam across a state forest - Gladstone State Forest, not sure if we can camp here or not but knowing it is late on Saturday evening and most normal folks don't work on a Sunday we drove in and found another 'cosy corner' for Winston and us to lay up for the night. 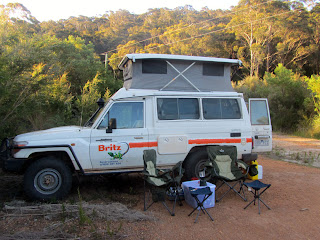 No sunset again, I guess the light pollution is getting in the way, shame but never mind we have seen a feast of colour as the days draw to a close this trip.  Something we have noticed over the past week or so is the dramatic drop in temperature at night.  When the sun is shining it is wonderfully warm but, quite literally, as the sun vanishes over the horizon little warmth is given off by the land and suddenly, and I mean suddenly, it is time to look for anything warm to wrap yourself in.  We have been so cold these past few nights that bed has been a welcome action and star gazing does not even get a second thought.  Even the window flaps in Winston's penthouse bedroom have remained closed!!!!!
Posted by Mimi at 5:03 AM