This is going to be a really short blog, not much happened today and the weather was pretty cloudy so no good for photos unfortunately.

On leaving Esperance we headed for Ravensthorpe, just north east of the Fitzgerald River National Park, meant to be beautiful and different from what we have seen so far.

Stopping off at Lake Monjingup, maybe something interesting for our lenses to capture.  Pretty boring place, they had a good dunny <g> but the lack of blue skies made the place look quite dreary. 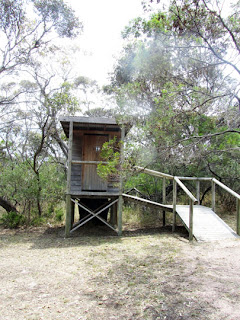 Managed to get a couple of flower pics and that was all. 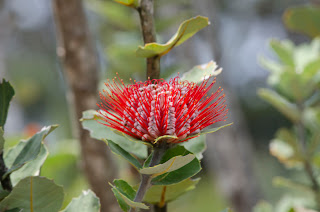 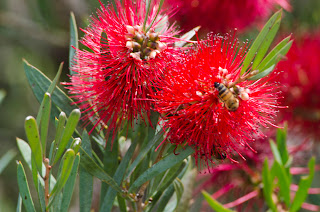 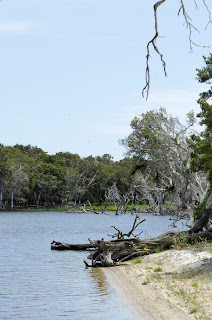 Alas, when we checked out the visitors centre in Ravensthorpe we were told the park was closed.  Due to all the rain the graders were in the park re-doing the tracks etc.  I guess all folks around here are only 2WD - how typical.  Now, not to be defeated and never believing what we are told we headed off to the park anyway, sure enough, it was closed.

Three p.m. and not much time to go anywhere we stopped at Kundip Townsite ruins, can't find a decent link for the place so you will understand there is not much to see there  but it was a place to park Winston up for the night.  Our excitement began when the flies came out to play and boy did they come in droves.  Alan and I must have spent a good couple of hours having fun with our fly swats.  It was amazing to see hundreds of fairly large ants appear to carry off all the flies we were sending on their journey from earth.  One thing struck me, if the ants were humans there would have been ructions.  When an ant grabbed hold of his manna from heaven he headed off home but none of the other ants attacked him for his prize.  Imagining a human scurrying off with a kangaroo leg for his dinner I think the surround humans would have pounced on him to steal his winnings.  Maybe we could all learn something from the ants civilised way of life!!!!

What's this, the sun slipped away for the night but no sunset, how odd and no we were not sleeping as the darkness fell, we waited patiently with our cameras but no orange/red skies appeared, it went from daylight to dusk to dark.  Oh well, can't win them all :)
Posted by Mimi at 12:13 AM