We were woken this morning to a chorus of cockatoos flying around and through the camp.  Alan got up and tried to get some pictures but they were too fast for him.  He said afterwards it was like being at the circus and he felt the birds were laughing at us while hanging upside down in the trees, flying and doing acrobatics and making one hell of a racket.
By 7:15am were were on our way for our walk to the Cathedral Gouge, another moderate walk with short steep slopes and some ledges to negotiate.  The park has done an exceptional job of creating walkways which blend in with the environment but take the struggle out of the really tricky bits.  Awe-inspiring is the only way to describe the gorge, the pictures we have taken do not do the place justice but hopefully you will get an idea of what it was like.  It took about 20 minutes for us to walk up to the gorge mostly along the riverbed which is bone dry at the moment, there were some sandy bit which we all know are a calf muscle exercise for everybody and the two tricky ledge bits had ladders up to them.  Some parts of the riverbed were artistry in the making, the potholes were large and deep.  I particularly love this one, they tell us the area has toilet facilities but I did not think they meant like this <g>.
I have tried with the pictures to give you an idea of the size and height of the place but I don't think I have succeeded. 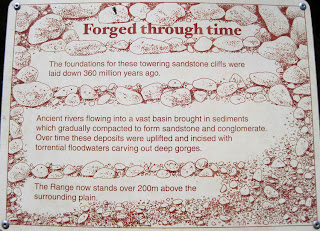 In the center of the amphitheater is a pool of water, it is low at the moment because of the dry season but it didn't matter.  When you walked to the far side and looked into the water you could see the reflection of the sides of the gorge above you in full colour.  It really was awesome in every way possible.  We sat there for about an hour just taking in the majesty of the surroundings.
On leaving there was a chappy walking up with a didgiderdoo, he was going to play it in the amphitheater where the acoustics were well known.  I was also told Quantas made an advert with children singing here, there and everywhere and one of their locations was Cathedral Gorge.  Here is the link http://www.youtube.com/watch?v=ze6D-59bLX0
Thanks Mich for finding it xx.

We are back at the campsite now, paid up for tonight and will head off to Halls Creek tomorrow before crossing the desert.  Our neighbours don't appear to have come back but maybe I am speaking too soon as they don't have a tent to leave claiming their spot.  I will keep you informed as to whether they have scampered or came back to haunt us <g>.  News Update No they didn't come back lol.
Posted by Mimi at 6:56 AM