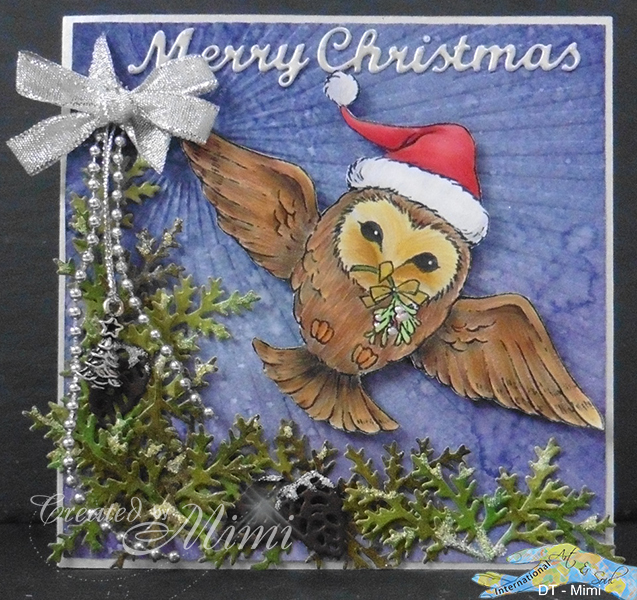 My eldest daughter is in love with owls so what could be more perfect for her Christmas card than the Aurora Wings Christmas owl digi, isn't it adorable :)  The image was coloured with a base layer of Promarkers and then Polychromes pencils to add more depth and then mounted onto the background with foam tape.  The background was created with distress inks and then embossed with a Sheena Douglas embossing folder.  For the branch leaves I distress inked several shades of green on card and finally added Crafters Companion silver glitter spray.  The die for the leaves and pine cones was a freebie on a magazine.  Stickles were added to the tops of the pine cones and parts of the leaves to look like snow.  A simple silver bow with some silver beads along with a Christmas tree charm finished off this card.

For this very special challenge, so hard to believe we are on our 100th Challenge, time just flies by these days - the first challenge went live on 11th of September 2013!!!  Ike has a wonderful pile of goodies to be won along with other gifts from friends and sponsors.  CONGRATULATIONS IKE, you are an amazing lady and it is a privilege to have been on you DT over the last couple of years :) :) :) 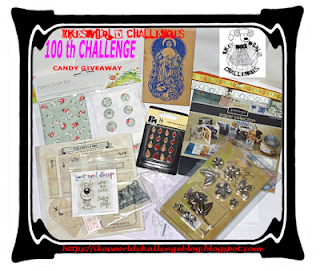 
And now for my DT Inspiration for this challenge :) 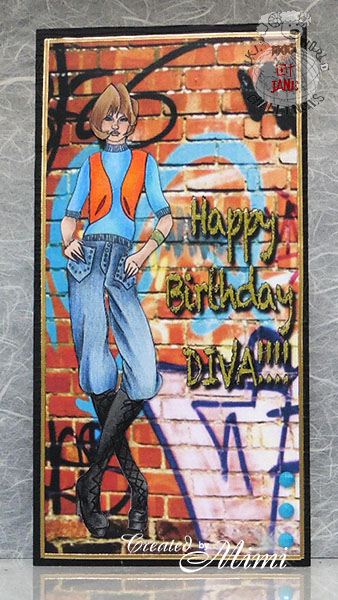 I pondered about this card and which route to take to celebrate the 100th - should it be a congrats card for Ike, and Ginny too who does so much behind the scenes with the DT, should it be a favourite image or what.  In the end I decided to use the freebie image from the first challenge that went live - FASHIONISTA'. The background graffiti paper was printed digitally after I had created the text which was white so I could colour it by hand later.  The image was printed, coloured with Polychromes and then fussy cut and attached to the background.  I coloured the text with a gold pencil and then added 3D dimensional on top to give it a nice touchy feely finish.  Finally I added three plastic dots.  A pretty simply card technically but fun to do :)  Just for fun here is the card I created for Ike's first challenge, a totally different look lol :- 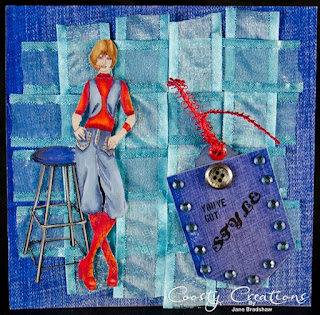 
Challenge #19
NOT SQUARE OR RECTANGLE 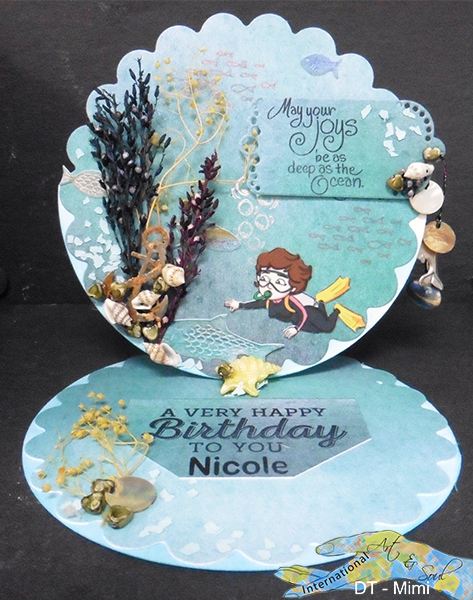 For many years my youngest daughter has been a rugby player amongst other sports but after many injuries she decided to stop playing, she now manages the team instead.  Giving up rugby she had to replace the many hours of training and playing with some new sports hobbies, one is downhill biking and the other is scuba diving.  I asked her the other day what sort of things she would like as themes for cards now she was growing up (she is 35 lol) and the answer was biking and scuba diving - I should have guessed but I so hoped she would say, lace, flowers, pearls etc. hahahaha.  My brain had a brain freeze with her choices and so I decided to start with a circular easel card and the theme scuba diving and let the card evolve as it went along as the more I planned it the more stuck I became.  Have to say, I am rather pleased with the outcome and I know she is going to love this one.  There is a little bit of sentimentality going on, the yellow shell bead is over 50 years old, it was from a shell bead set my Grandpa gave me when I was a wee girl, treasures so often found in old bead boxes :) :) :).  The bead at the end of the bead drop is a hand made one I brought back from Kenya where my daughter was born.

Email ThisBlogThis!Share to TwitterShare to FacebookShare to Pinterest
Labels: CH19, IA&S, Not square or rectangle

Challenge 99
Anything Goes With an optional twist Autumn 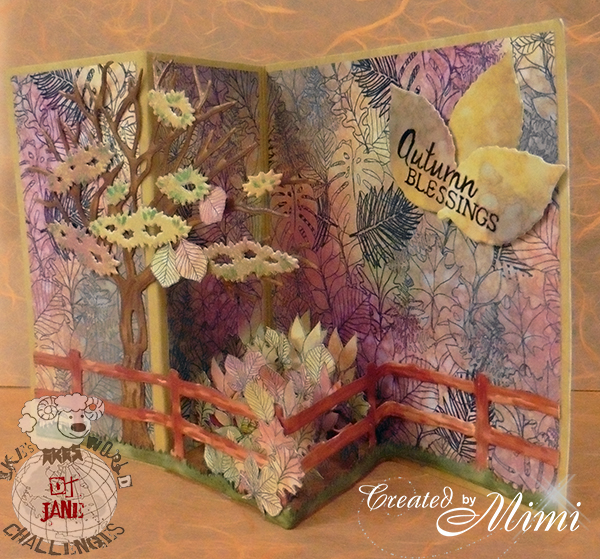 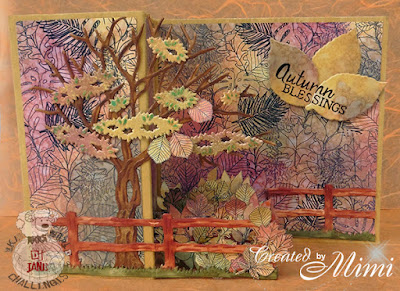 Another challenge I was a bit stuck with as I never feel comfortable working with these colours, I am a blue and purple gal hahaha.  I know so many folks love Autumn but for me it means the onset of winter with super short days and long long nights, lots of rain and wind and altogether a totally rubbish time of year weather wise so it is something I certainly don't celebrate.  I do have a good friend who loves Autumn so this card is winding its way to the USA to adorn her mantlepiece :).  Ike very kindly drew me a bunch of leaves to work with which I used both to create the collage background paper and also printed tons of leaves in a reduced size and fussy cut them to make the pile of leave which have fallen off the tree.  The background paper was designed in Photoshop and printed out with no colour, I then used my Distress Oxides to add the colour. 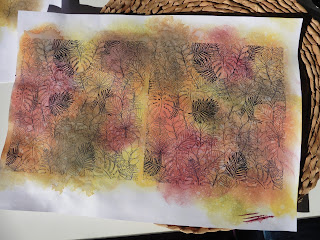 Rather like the outcome and throughly enjoyed all the fussy cutting of the leaves, maybe I am an oddball but I do find fussy cutting rather relaxing, maybe it is because I can have a lethal weapon (my super sharp scissors) in my hand and can snip away at my non feeling paper to relieve the pent up annoyance with society hahahaha and at least this is a legal way to relieve my frustrations hehehehe. 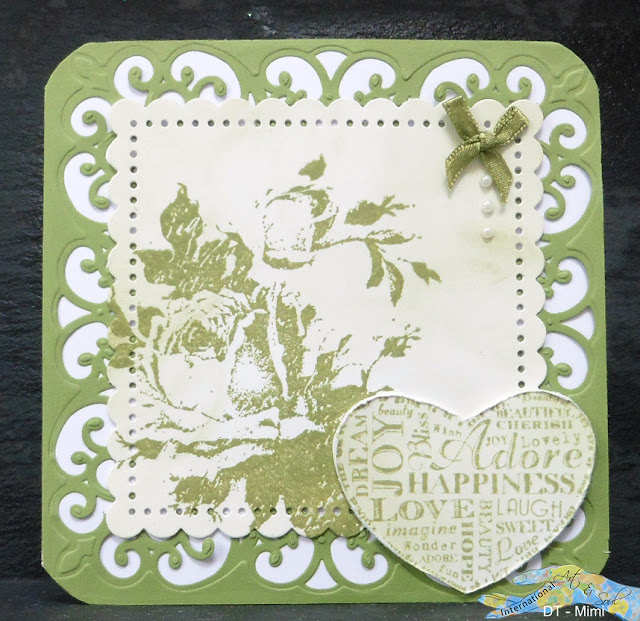 Something a little different for a change.  So often when I do monochromatic I head for a beautiful digi to colour and indulge in hours of colouring with only a few shades of one colour, I find that totally therapeutic lol.  Don't ask why I deviated this time, I have no idea but here you go a card with just stamping and die cutting.  At least this one will fit in an envelope and travel through the post safely, that makes a change for me :)