The challenge this fortnight at I ❤️Promarkers is 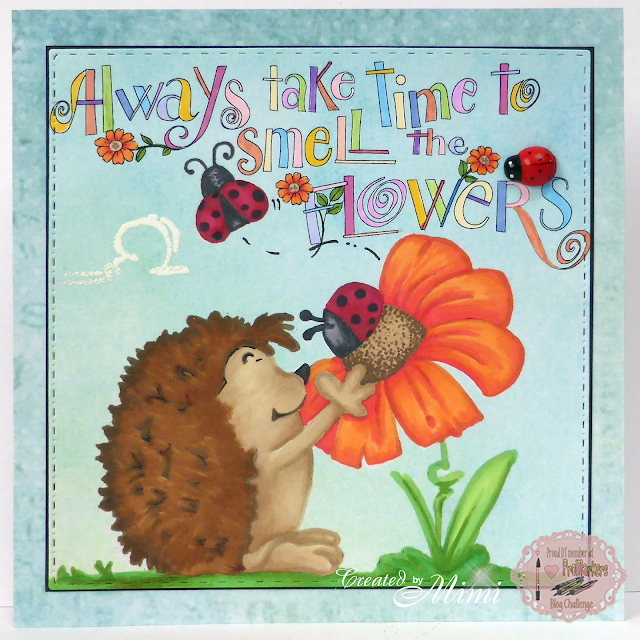 This is the perfect time to really look around and marvel at the wonders of nature, her beauty, her strength, her resilience and what better way than to stop what you are doing and find a flower to smell :) :).  I just adore this image and had so much fun colouring it although the flower had no smell and thinking about it am glad my nose was not up that ladybugs butt either hahaha.  Talking about the ladybugs, I chose this image not only because I fell in love with it but also it had 2 ladybirds and I knew, tucked away in one of my craft drawers, I had a packet of wooden ladybirds so using one of them to make the '3 of a kind' I could make a card to fit the theme perfectly.  Love it when a plan is in action.  Now, when it came to assembling the card could I find that packet of wooden ladybirds, I must have had 8 drawers turned inside out, no sign.  I ended up putting the project to one side instead of stressing as I know the fairies often pinch things when they know I need them, yep they have a funny sense of humour but I have learnt now to walk away and go look again another day instead of getting wound up hahaha.  Sure enough, I was in one of the craft drawers a few days later (one I had gone through twice a on my earlier hunt) and what does my hand land on first - the packet of ladybirds.  Thanks fairies for putting them back :) :) :)

The image is coloured with Promarkers but I forgot to write down which ones I used, just know there were about 30 different colours.  The sponsor image used is 'Hedgehog Flower' 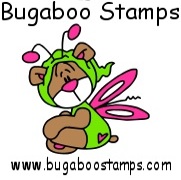 This card is being entered in the following challenges : -

Email ThisBlogThis!Share to TwitterShare to FacebookShare to Pinterest
Labels: 3 of a Kind, Bugaboo Stamps, I ❤️Promarkers


Challenge #82
Anything but a Square or Rectangle


This fortnights challenge 'Anything but a Square or Rectangle ' has been chosen by Jenny. 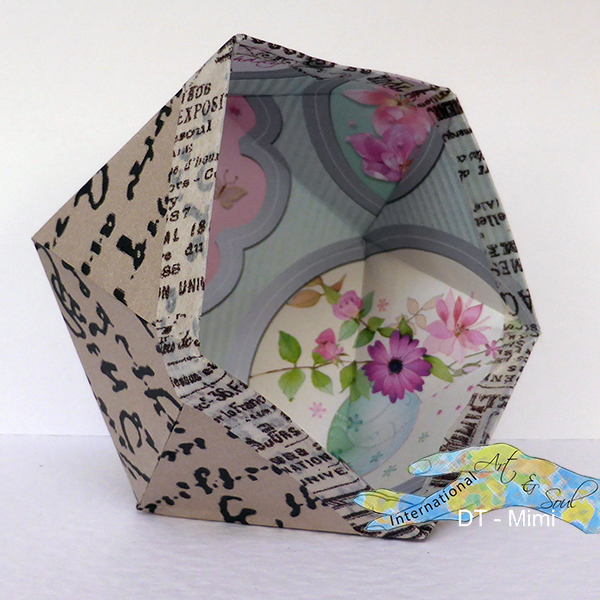 I had one of those days when I wanted to make something but just wanted to sit in my chair and fold some paper :)  A hunt on Google really paid off when I found this simple pattern to print on patterned paper, cut out and then fold.  It was not hard, and I guess it does not look exciting but crafting is all about having fun and I had a ball for the hour or so while drinking my coffee making this wee box.  I used some design paper I had for ages and ages for the outside and the inside is made from a sheet of free paper topper sentiments paper that came in a magazine.  To tidy up the top the edges I used some washi tape.  I am rather cross with myself as I can't remember the site I found the pattern on and although I kept a record I was clearing files off my computer the other day and put it in the bin which I then emptied.  Been hunting the net to find the site and can't grrrrrr.


I am entering this candle in the following challenges : -
Posted by Mimi at 12:00 PM 3 comments:

Email ThisBlogThis!Share to TwitterShare to FacebookShare to Pinterest
Labels: 🌍IA&S, Anything but a Square or Rectangle, Challenge #82

The challenge this fortnight at I ❤️Promarkers is
'Speedy Recovery/ Get Well'
and the sponsor for this challenge is  SheepSki Designs  with a prize of 3 digital images from the Sheepski Designs store. 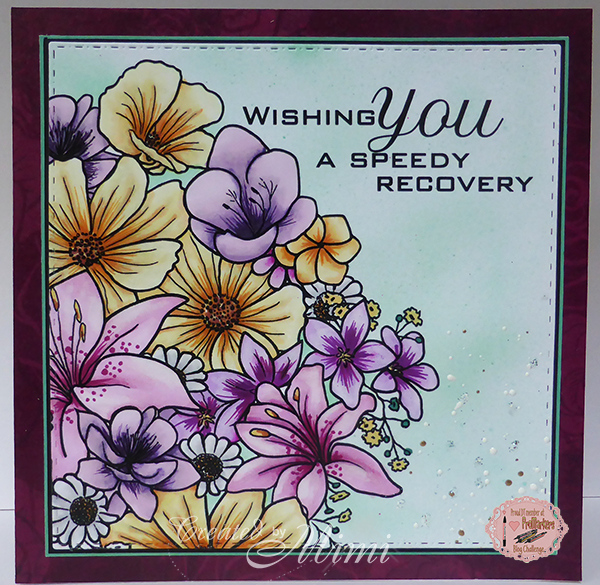 Something a little different for this card, I cropped the image Flower Bouquet by Sheepski Designs to form a border on one side of the card and added the sentiment before printing.  This is a favourite layout of mine especially flower cards :).  The full image looks like this : - 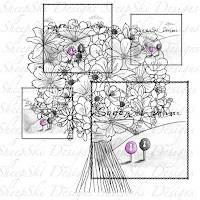 With the image printed I then masked it and created the background by airbrushing with Promarkers.  Next I coloured the flowers but silly me, so busy grabbing this colour and that colour that I forgot to make of record of the ones I had used, sorry.  To finish off the card I used some copper, white and turquoise glitter embossing powder, then mounted the image layer on black, followed by turquoise then added to my card base which I had covered in a burgundy floral design paper (the flowers are really subtle but can be seen in the right light, large roses) 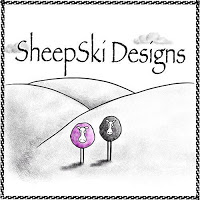 The prize is three images of choice from their shop


I am entering this card in the following challenges : -

Email ThisBlogThis!Share to TwitterShare to FacebookShare to Pinterest
Labels: Get Well/Recovery, I ❤️Promarkers, Sheepski Designs


This fortnights challenge 'One-word sentiment used multiple times' has been chosen by CG. 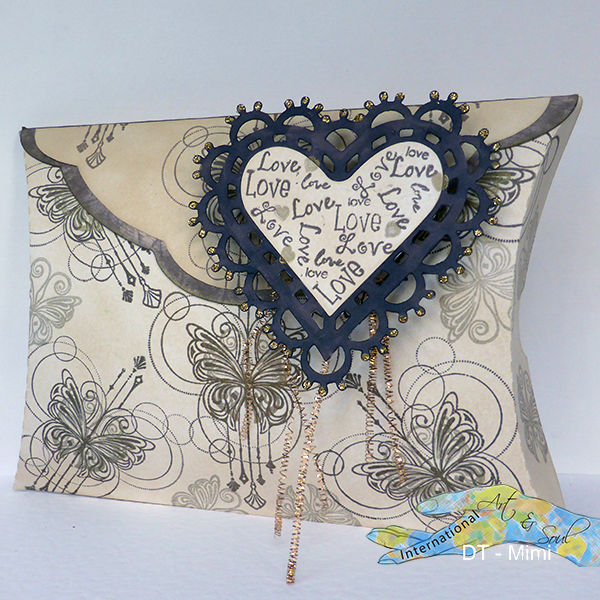 It has been ages since I made a pillow box and they always come in handy for putting a wee gift inside.  Once I had cut my base shape on white card I used Distress Inks to create the colour I wanted.  I then used stamps from Creative Stamper and Momento inks to create the backgound.  Next I die cut the heart and raided all my stamps to find anything with the word 'love' to use to create my one word multiple times topper. To finish off some Stickle blobs on the edges of the topper and springy spiral metal twine stuff for a bit of fun :)

I am entering this candle in the following challenges : -
Posted by Mimi at 12:00 PM 2 comments:

Challenge 131
P is for Paper Piecing 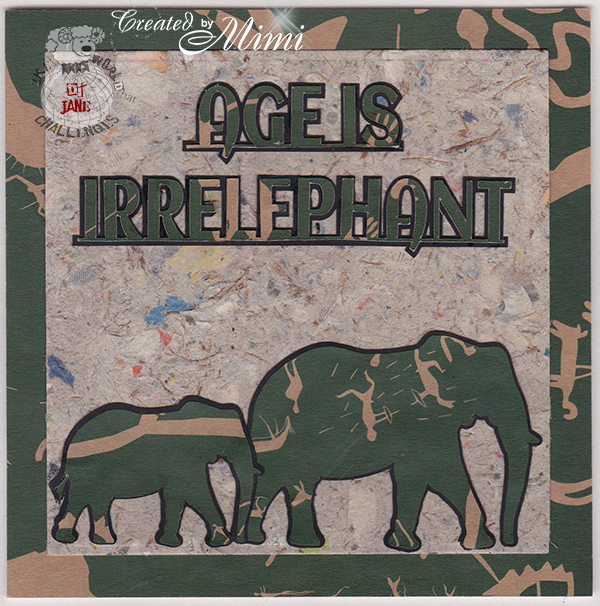 Not my original idea for this challenge which was a duck but for some stupid reason I printed it on card and not paper so when I came to fussy cutting all the sections which then planned to colour and stamp with a pattern the duck was several layers and very heavy for the card.  Into the bin it went grrrr and I spent the next few hours trying to rethink.  Everything happens for a reason lol, I didn't know what to paper piece then remembered the African Animal Silhouette set which I had and - yes - perfect.  This card ended up being a bit special as the backing paper I used is wrapping paper I bought in Kenya, in a small town (well twice the size from when I lived there back in the 80's) called Nanyuki  on the slopes of Mt. Kenya on our first return in 30 years :). The paper behind the elephants is also from Kenya, made by tribal ladies on the Suyian Soul ranch.  They collect all sorts of fibres, those found lying around, newspapers, paper bags, bits of paper from packaging etc, and use it to make their hand made papers.  I have a few sheets but this is only the second time I have used it, one of those items in my craft room where the memories attached sometimes make it hard to use the product lol.  I designed the sentiment on SCAL along with the black shadow layer, the elephants were converted to .svg files so I could die cut them and a shadow layer was added to them too.  A lovely card to make in the end after the earlier struggles :)

Oh happy days lol.  On and off for a few years now I have played along with the Sisterhood of Snarky Stampers, a challenge I often go and check out because it is right up my street but oh boy! do I find it hard to make snarky cards.  I know creations can just follow the theme and not be snarky but when I play along with a challenge I like to follow the theme the best I can.  Things all fell into place a few weeks ago with a card I had made for the IKE'sWORLD DT with the theme 'Out of Your Comfort Zone', I made a card with Ike's Black Widow on it and added a snarky sentiment.  At the same time Sisterhood of Snarky Stampers had a challenge E is for Evil so I entered and HURRAY I won my Queen badge, now proudly displayed on my winner page :) :) Thank you so much Sisterhood of Snarky Stampers :)

As part of winning I was asked to be a guest designer for this challenge 'Retro'  I decided to use Illustrator and make a Summer party poster.  OK so most parties ask you to bring a bottle, or maybe a plate of something yummy to eat but I am so sick of all the hoarding that has been blasting my FB page that I decided it was not a bottle or food that should be requested but LOO ROLL. 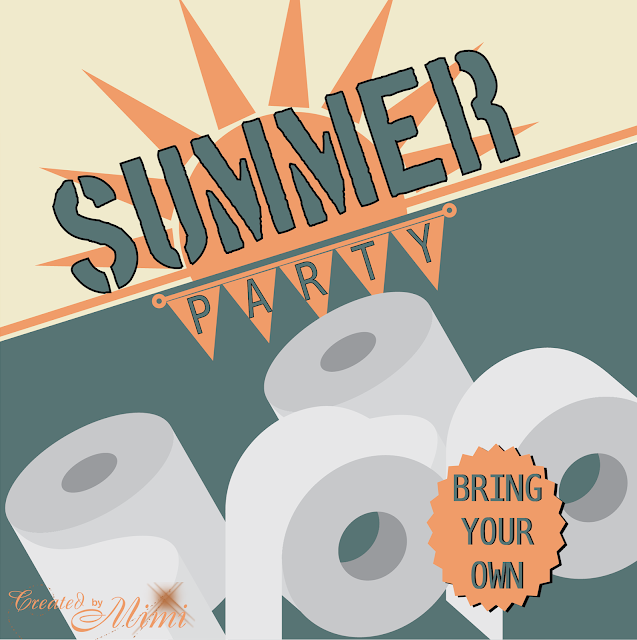 The challenge this fortnight at I ❤️Promarkers is
'Birthday'
and the sponsor for this challenge is Dr Digi's House of Stamps with a prize of 2 digital images of the winners choice.

For my design creation I have used the Dr. Digi's House of Stamps Captain Thunderpants image, such a cool image and so much fun hahaha. 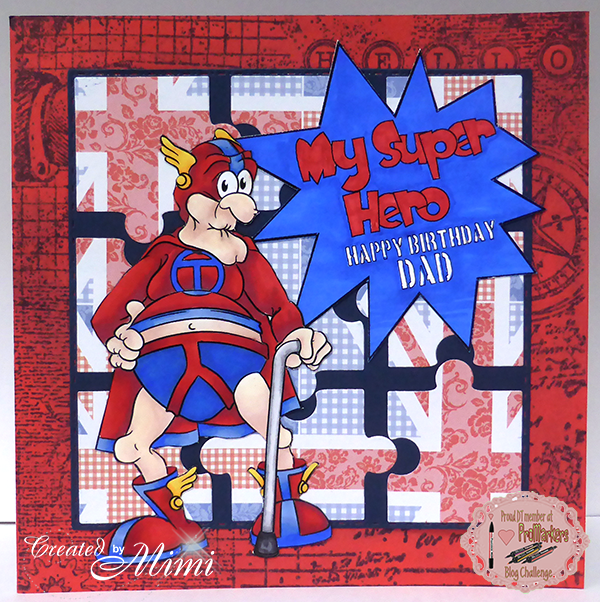 The image was coloured with Promarkers and then I designed the star burst sentiment on Illustrator and then also coloured with Promarkers.  For the background I used some Union Jack paper I have had for ages and die cut it with a jigsaw die, the pieces were then mounted on dark blue paper.  Up until now the card was going quite well but I had some stray ink on my working mat and only discovered that when I lifted the card blank up grrrrrr - ended up stamping the back of the card to hide the small spots.  Now I am not sure what planet my head then went off to but think it might be because I enjoyed stamping the back but I decided to stamp the red backing paper I had used to cover the front of the card - I know it does not really match the theme of the card but it is the only large suitable for males large stamp I have.  Overall I do think the card has a super hero look about it, hope you do too :)

I am entering this card into the following challenges : -