We were up early this morning and ready to head out and potter round by 7am - we must be keen <g>.  No idea what we are going to see, just a 'drive about' heading in the direction of Middle Springs and Black Rock Falls which we picked out from the map.  It was a good choice of road to trek down, the first thing we saw was a cafe selling fresh fruit and veg locally grown along with mango smoothies, mango ice cream etc; we bookmarked that for later in the day. 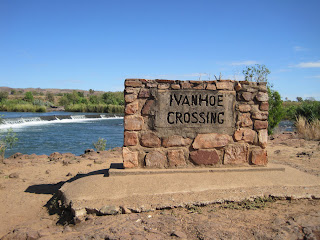 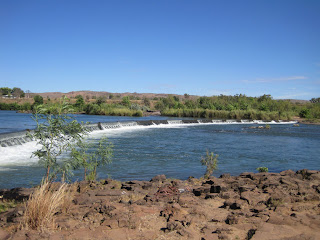 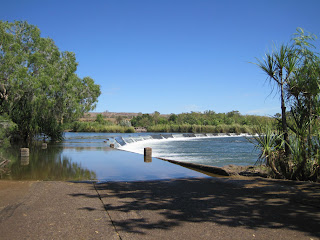 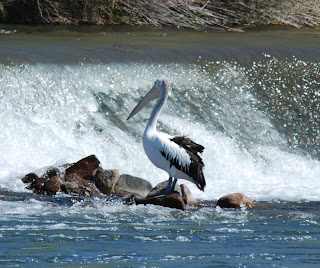 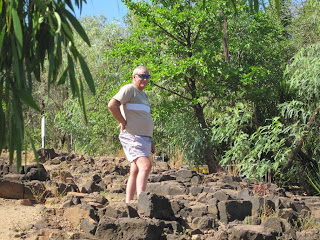 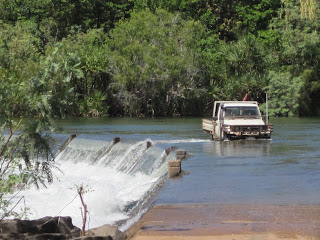 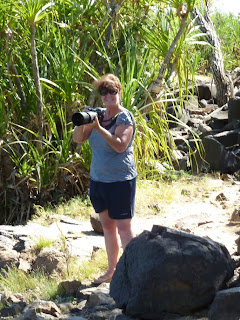 Black Rock Falls on our left so a quick look, not much to see with it being the dry season but with a bit of imagination one can get the full impact, water falling down over a black rock background, surrounded by red rocks and blue sky - have you got the picture? <g>. There were loads of butterflies at the bottom of the fall too. 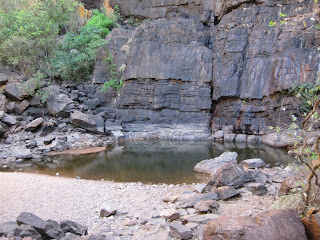 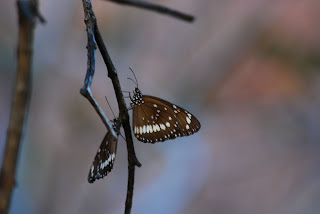 We seemed to have missed Middle Springs so will check them out on the way back.  Off on another track, choices to be made, left or right where the track has given way, what fun.  We did not bother to drive all the way down thinking it was about time we got some exercise so we parked the car up and headed on by foot.  Don't freak, you know I don't walk far <g> and sure enough it was not far.  What a shame another car there and 'humans' but I had to forgive, it was a couple with three very young Aboriginal children complete with their armbands, cute stuff.  I did not ask but I suspect they must be fostering the wee ones.

Time for a coffee so back across Ivanhoe Crossing and this time as Alan was driving across I was sure I saw a 'croc on a rock', quick snap with the wee digi camera and yes it was a croc.  Only a wee one but at least we have seen one, he was a fresh water guy so not a viscous as the salties we never found.  Nobody else had seen the croc so, being the friendly soul that I am I let them all know.

Time for a coffee, or fruit juice or smoothie or ice cream or even one of each <g>.  Yummy, the mango cheeks were just as I remember from long ago, juicy, sweet with that occasional tang you get from fresh mangoes and the mango ice-cream which accompanied it was terrific too. 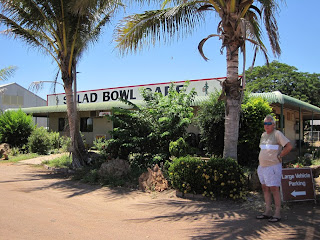 Another signpost, a sandalwood factory, got to check that out, ooooooooooooooooooooooh the smells, glorious and yes the walled had to be removed from Alan's pocket.  Some conditioner for my hear and a couple of other bits and bobs. 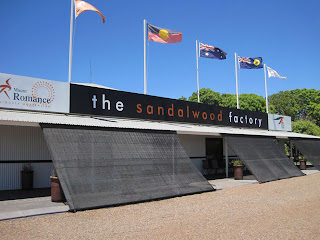 On the same sign as the sandalwood factory but pointing the other was a distillery, OK here we go, got to do the 'tasting'.  The oldest legal distillery, yep a bottle was bought and tomorrow we will get some cokes to go with it.  Now this was a nice touch, if you bought their postcard for a buck they would pay the postage <g>, another card on its way to Mum lol.  She will love this one with not being a drinker, maybe by the time I get back to the UK Mum won't be talking to me, a 'lazy letter' and now a boozy postcard lol. 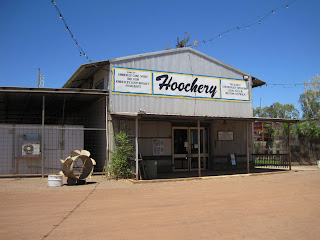 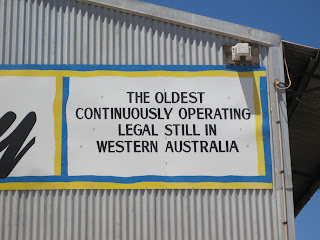 Next stop Lake Argyle, right seen that now.   I am sure we will get better pics of Lake Argyle tomorrow when we explore the place better and find some unmarked tracks, this view point really does not do it justice I think and we don't have much time left today. 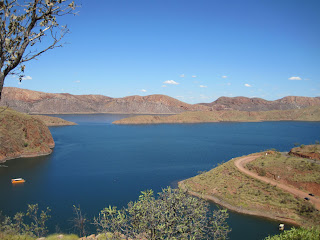 On the way to the Lake we saw a sign for a sanctuary where they were caring for Koalas, got to go there. Several km up the road to the main entry gate, shoot, closed to tourists, wish they had said that on the road sign but a neat view of the river anyway.

Right another sign we saw was for a tropical garden, that could be a goodie, flowers, insects and birds, yep time to check it out.  Hahahahahahah, in England we would call this place a tropical plant nursery, it was selling tropical plants.  The chappy working there had a laugh and asked us if it was Friday.  Now that threw me, I have no idea what day it is but thought it was early in the week than that.  He then added he just wished it was Friday and in fact it was Wednesday.

Time to head home, have a cuppa then a beer.  We were told it was steak night tonight so guess what I am having for dinner, tummy is rumbling already.

Not sure once again when I will get another blog up, probably not for about 10 days or so but I will keep writing in the meantime and upload everything ASAP.
Posted by Mimi at 9:30 AM