All packed up and ready to move again sometime around 10am, can't say we were highly motivated for an early start.  It did not take long to pack up the tent etc but we are learning, best to do this early morning and only have a few things to do later in the day before the sun gets too hot.  We will remember that for next time.  One more cuppa before heading off to another location and get some more pics then pack the gas stove and pan away, swill round the cups and put the milk back in the fridge. 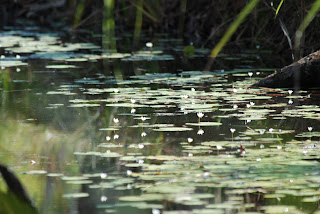 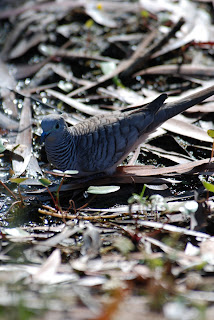 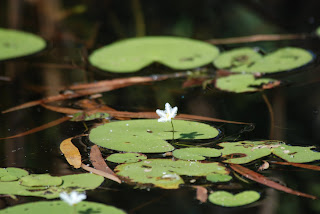 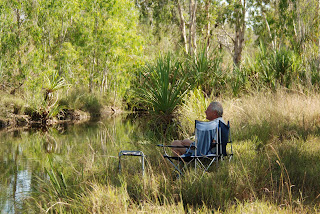 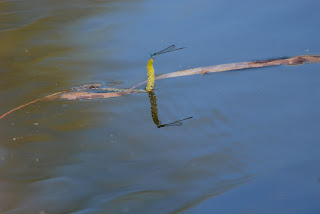 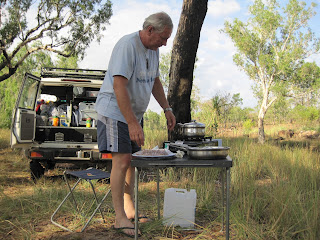 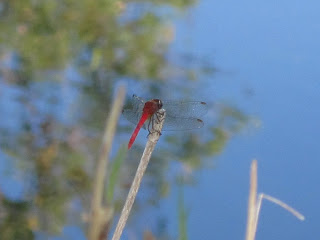 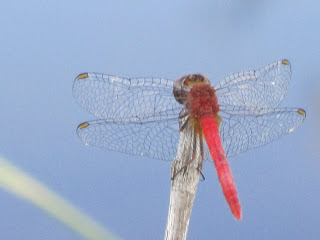 Mitchell Falls sounds wonderful but we are in two minds, yes we want to go check it out but we don't want to see humans.  It took about 5 hours of driving on rough roads (still not 4 wheel drive stuff, just lumpy).  The scenery was forever changing, barren land with spaced out trees, rocky land with different trees, dried grass on one side of the road but the other side cleared where they had burnt the scrub ready for rejuvenation. 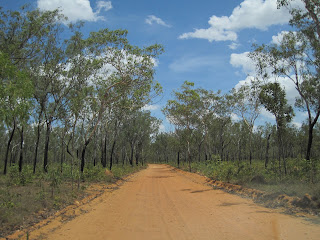 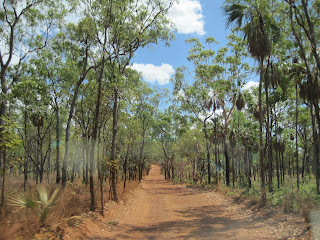 Wildlife, very scarce <g>.  We did see some cows and four horses just roaming around, remnants of the past and now free to do as they please.  No kangaroos, few birds and bugs and no lizards yet which are apparently abundant in this area. 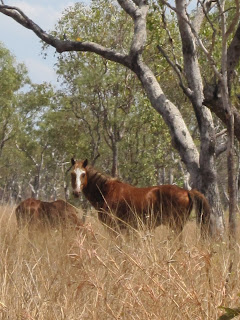 As we drove into the Mitchell Falls camp site our hearts fell, organized, controlled and humans.  We drove around two or three times trying to find a location that would suit us but no luck, having paid to spend the night and it being far too late to head to another location we set up our tent with long faces, we could not even be bothered to rake the camping mattresses out and put them in the tent, just threw in a couple of sleeping bags to lie on.  The ground was rock hard, well trampled so we knew we had an uncomfortable night ahead of us but planning on an early get away in the morning we did not want to unpack too much. 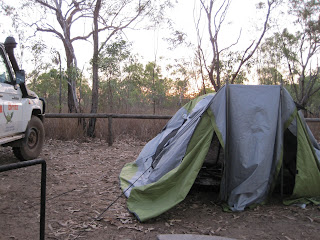 We donned the walking boots again, filled the water bottles and headed off to check out the falls.  We planned to walk to the first of the three waterfalls and go swimming but once we reached the top of the waterfall we had second thoughts, the ground was very rocky and there was a fair bit of clambering about for me.  I had slipped in the river back at our secret location the day before and knocked my ankle so really did not want to do something stupid today.  Maybe we should have tackled the trip to the bottom of the first of the falls, we have since found out that we did the hard bit to the top of the falls and the path became much smoother. 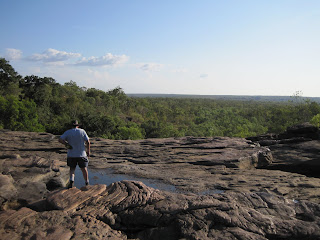 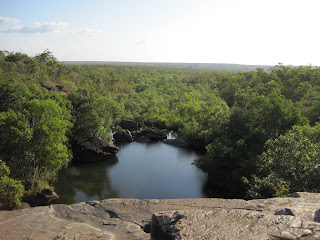 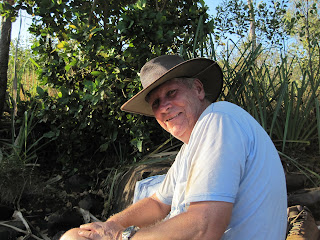 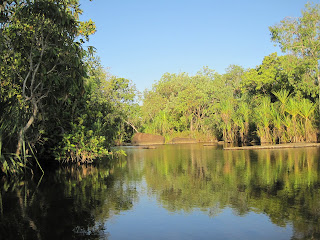 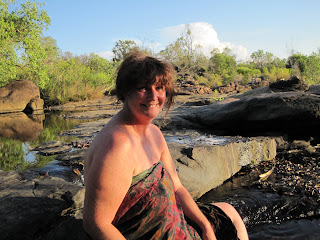 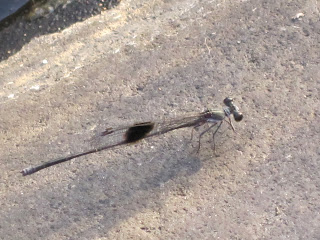 Oh well, not to worry, we sat for half an hour or so in the shallow pool at the top, about 20 meters from the edge, spectacular in its own way and no other humans were there, only a few boatmen, tiny fish and the ever present dragonflies.  Most folks seem to walk down the three sections of the waterfall and then take a helicopter flight back up which takes 15 minutes and costs $100. Apparently the photography from the chopper is fab but not our thing.  Unfortunately our camping area looks at the three helicopters they have operating. 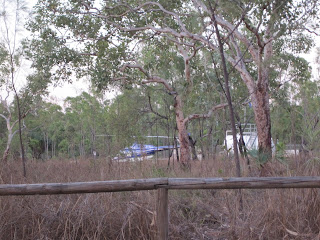 Our challenge for the day is to cook a proper meal, spaghetti bolognese on one burner.  We did have a fire pit to cook on complete with hook for a billy can but we had not bothered to collect any wood from the wood collection zone 20 kilometers away and were not going back, gas is nice and easy and safe.  Alan chopped the onions and garlic, I stirred the pot and added the other bits to make the bolognese sauce, a great big pan of it so half can go in the fridge for another night.  Now for the pasta and while that is cooking a nice cold beer, ahhhhhhhhhhh.  OK where is the cheese, I know we bought a block in Darwin but it is nowhere to be found now, has it gone 'walkabout' I wonder.  Too dark to hunt everywhere in the car, just have to keep our fingers crossed it does not stink :)

We have put our car between the other campers and ourselves so we can pretend they are not there and they are being quiet so in all we are quite content.
Posted by Mimi at 4:41 AM