I can't remember where I left off as I have no Internet access to check, but I think I got round to telling you about the lovely view from the motel we stayed at in Kununurra and finding out that it was an hour and a half earlier than we thought as our time pieces were on Darwin time.  Hence there was no need for us to rush away after waking up and giving me time for several cups of tea and to bring the blog up to date.  So here we go - from leaving the motel:-

I was pretty hard to get motivated to move after the long journey yesterday but it had to be done or we would be spending yet another night in civilization which we are trying to avoid as much as possible (hence no fancy hotels with baths this trip <g>).   I have managed to get hold of a brilliant e-mail to send my mother called the 'Lazy Letter', several statements followed by multi choice answers to tick which I wrote a couple of days ago and have been looking for a place that sells stamps so I can post the flipping thing.  So, last minute food shopping, sort permits for going north, get fuel and find post office - oh what fun!!!!  Not too bad, the Tourist Info place was opposite the shop where we got food, fuel down the road but the post office, several missed turning later and it was found but just our luck, was closed.  It was Saturday we discovered and they did not open and we were not staying in Kununurra just for a letter, it will just have to travel with us a little longer.

All sorted, registered, paid up, valid to drive in parks - lets go and we did, straight out of Kununurra and heading West to the Gibb River Road which we are led to believe is beautiful but rough driving. 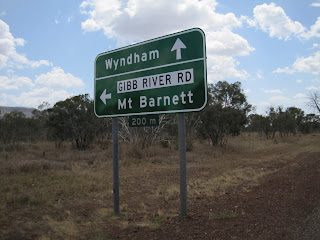 Beautiful, well not so sure about that, some places were dramatic and the road was easily accessible in 2 wheel drive, not tarmac but well maintained corrugations.  It did not take us long to work out where the grader had been busy, vibrations on low. 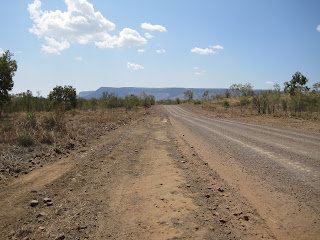 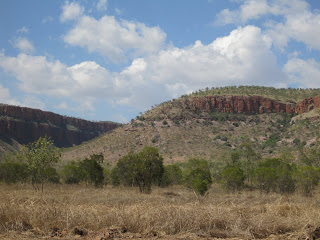 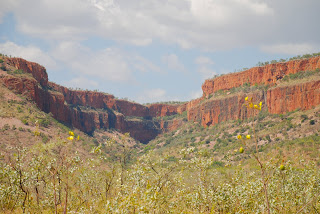 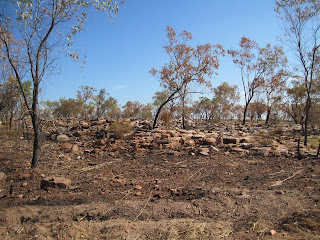 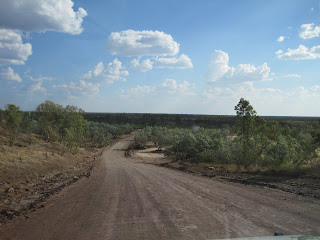 The first big puddle, Durrack River, we had to drive the car through and my heart was in my mouth.  How stupid, it is the dry season, the information given to us is that all the roads are open and I know there is no problem.  I remember once, many years ago when Nikki was a tiny tot and we were 'bundu bashing' in Kenya (heading through the bush).  We came to a much smaller puddle than this one and Nikki burst into tears, she was so worried about the car going in the water in case it sunk, bless her cotton socks. 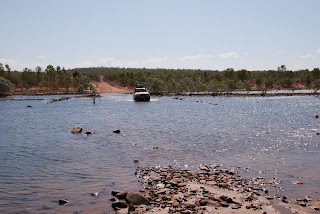 There was another car coming from the other side and I was quite happy to watch it cross first, what a chicken I am.

One pays a fortune for massage chairs and I have one that is permanently vibrating <g>.  200 Kilometers down the road we see a sign for tea and scones and camping, this will do just fine.  The place was called Ellenbrae, part of one of the Stations. 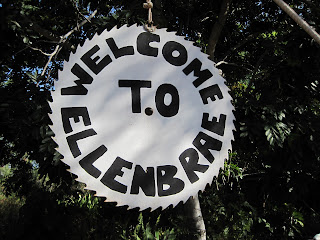 The couple looking after it were from Holland and were usually at the main station but were covering this place for a month.  They had some stories to tell once you got them talking.  They had come to Australia in 1971 and spent the last 14 years here in the Kimberley.  The owners had pretty much lost interest in the place and were just creaming in the money, there were 5000 head of cattle roaming free that had not been herded in, and instead of spending money on the place, were just buying more land and therefore getting tax relief for investing.  Shameful, everywhere in the world the rich get richer and the poor get poorer, well financially poorer anyway.  While drinking our cups of tea and plowing through a huge scone with cream and strawberry jam which I could hardly finish we were entertained with birdsongs from tiny wee things and wallabies nibbling the grass on the lawn, is this a case of England meets Australia I ask? 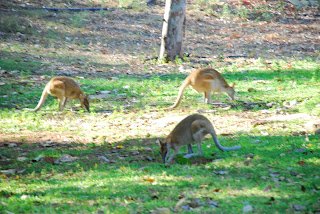 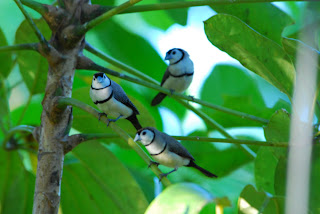 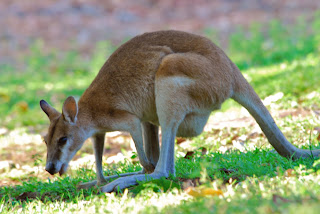 What a lovely couple, they went out of their way to help up in any way possible.  With Alan having done nearly all the driving he was pretty tired and it was getting late in the day to pitch the tent which so far had not made it out the bag so we splashed out and stayed in one of their cabins. This has been the second most expensive place we have stayed since coming to OZ and what a treat.  Comfy bed, light operated by car battery, generator off at 7pm, showers that needed a tin can filling with paper and wood chips and put in a little hole in the shower area to heat the water, locusts living quite happily in the nooks and crannies - heavenly.


I asked the lady if she knew of any good campsites off the Kalumburu Road which was the direction we were heading and she started to tell me stories of when her kids were younger, camping, etc ect.  Then she said she would have a word with her husband and let us know tomorrow and did I really mean, a place with no other people <g>.  Magic, hope is in the air.  That night to celebrate our first night of almost bush camping we cracked open the bottle of vodka, sitting on camp chairs, with nobody else in the cabins and the sun setting we enjoyed our vodka and Red Bull, SORTED <g>.