Could I resist - easy answer to that - no <g>.  I have had this super cute digi by Stitchy called 'rain drops' for a wee while now and just needed an excuse to use it.  After a really long winter in the UK and now half way through Spring hardly knowing that it had even arrived (so I am told as I am in Saudi, well away from all the rain <g>) I thought it would be rather nice to create a card for all my family and friends a couple of thousand kilometers away telling them it is now time to look for the rainbow.  Warm, dry weather can't be far away now!!!!

My brain cell was not working properly and although it was inadvisable in this frame of mind to try something new I did anyway.  I really wanted a plastic looking umbrella and found in my stash some 3D effect stuff by Anita.  Sounded like just the thing to use.  Image coloured and cut and time to apply the compound, brilliant, just the effect I wanted but, yes there is a but ..... the area was far to large for me to cope with and I was to mean to use nearly a whole bottle :)  - oh dear, no good, something else to fill my bin with and start again.  Back to my normal method or using a sheet of plastic transparency.  It has sort of given the effect I was after in real life but as I didn't use the  flash on the camera you can't really see it in the photo.  The bottle of 3D effect stuff was still sitting in front of me shouting out - 'hey come on use me on the card, I am feeling rejected'.  How could I refuse and so the wellies, yes the wellies could be plastic too and the area not to large.  With a happy bottle of 3D effect stuff in my hands I covered the wellies.  Alas, like the umbrella, they too have not shown themselves in their glory due to not using the flash. 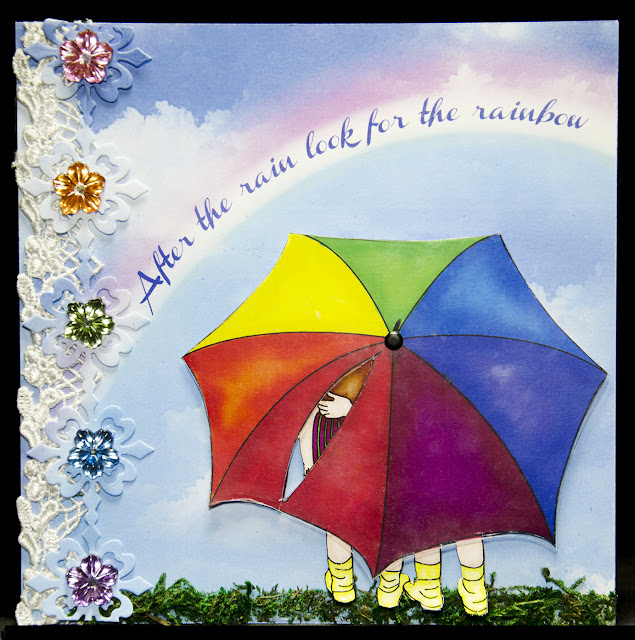 Recipe:-
Recipe:-
Reading this post I think I am in a very odd mood - beware anybody in my vicinity lol

I would like to enter this card into the following challenges