Alan was up before the sun this morning and had made my cup of coffee before I reluctantly surfaced at about 6am.  Last night had started off very still and hot, even with all the flaps open in the tent.  However, somewhere around 3am it got quite cool and I was all comfy, snuggled up in the sleeping bag.  Yawn, stretch, coffee, OK, time to get up.

Today we went for a walk.  Don't laugh, I am not winding you up again, we really did go for a walk.  Not a long expedition just a couple of kilometers and it was thoroughly enjoyable.  I have no desire to walk on roads, walkways, pavements or golf courses, this is quite different and much more entertaining.  We set out on the pre-planned route to the Echidna Chasm, beautiful.  I think the three words I have used most since coming to OZ are awesome, stunning and beautiful, this is truly a beautiful country with it's variety of habitats and space. 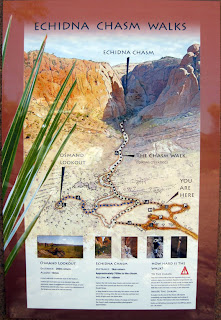 OK back to the Echidna Chasm, a walk described as moderate with a challenging climb at the end (I had no idea what that meant but I was up for a challenge).  No big camera with the zoom lens, that is pretty heavy to carry and I may need two hands lol.  We were told to be there between 11:00am and 11:30am to get the best effect and what an effect it was.

The pictures will take you from the car park, up the stony path (looks like a river bed <g>), into the entrance area and finally through the narrow gaps to the chasm proper.  What an awesome place, nature is magnificent is so many ways.  I was thinking about Lake Argyle, yep a clever piece of engineering but it is not a patch on something like this which nature has created without our interference. 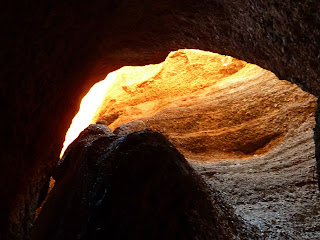 This afternoon we have taken it easy, a couple of beers while we try once again to sort out the car into some semblance of organization.  Why is it that the item you need is always the one at the back of the drawer or rear area and everything had to be removed to get to it I wonder?  I cooked up another 16 sausages (we like cold sausages and it means we don't have to keep cooking a couple here and a couple there), then in case the mince (ground beef lol) goes off I tackled that too with a onion and lots of garlic.  When we decide what to eat the mince with we can then add the tomato, or curry, or chilli, or Italian seasoning etc.  The basic will do for now.  After having lost the cheese when we first arrived we invested in a pot of Parmesan, now I have lost the packet of Italian seasoning, I have the Italian seasoning sprinkled neatly all over the bottom of the drawer but the packet it came in has mysteriously grown legs and walked.

A shower is on the cards tonight, Alan has once again rigged up the solar shower and it has been heating water all day.  I plan to wash my hair, condition my hair then have a shower, we will probably have to fill the bag up again <g>.  The water is all pretty warm so Alan won't have to have a 'cold shower' <g>.

Tomorrow we plan another walk but we will head off early in the morning before it gets too hot, I think it is going to be another magical place we visit but I will let you know once we have been there and returned.  We did plan to leave tomorrow afternoon for Halls Creek but I think we are staying another night (so the washing we soak tonight has time to dry while we are walking).

Two sunsets today, well two pics of sunsets that is :) 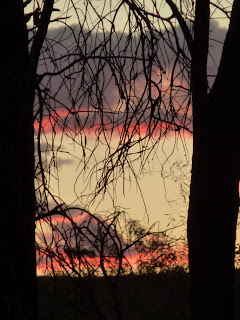 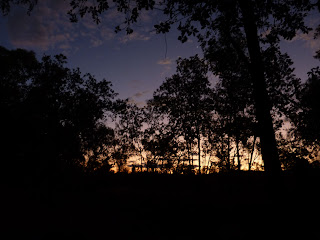 Well, what to do, I have something else to add after having written the blog for today we had an interesting night <g>.  We did our usual of getting everything organized so we don't have to fumble around too much in the dark, find a good spot to star or moon gaze, get a cup of tea or other liquid refreshment and spend an hour or so reveling in the wonders of the night sky with no light pollution.  We have a great light, full fluorescent if we wish or turn it to an orange glow, our favourite, just enough to see where we put our feet but not bright enough to attract too many bugs or interfere with the night show ahead of us.
Last night we gained a couple of neighbours, one was brilliant, he put his tent up in virtual darkness but the other couple grrrrrrrrrrrrrr.  Some time ago we had a neighbour back in the UK who really was the neighbour from Hell and funnily enough we passed over a creek just before entering the Pernululu National Park which had the same name as them - it began with McP…  These neighbours were catching up to those neighbours, they didn't have any kids or make much noise but the light coming from their area was like being at Time Square (slight exaggeration but it felt like that).  They had a florescent strip attached to their vehicle and a torch/lantern which was equally bright.  Every time there was a noise out they would come with their torch/lantern and sweep the surrounding area for about 10 minutes.  They were bad enough when I was having my shower with nature but when Alan had his the torch was backwards and forwards on him, he reckons they were preving (I had not complaints at the point).  Alas the light show kept going on and off for about two hours.  In the end we went to bed, they had managed to ruin a beautiful time.  The stars were so bright and the old nursery rhyme Twinkle Twinkle little star, how I wonder what you are.  Up above the sky so high like a diamond in the sky - summed up the moment to a T.
Posted by Mimi at 6:17 AM