We are enjoying staying here so much we have decided to stay another night, which could turn into a couple more at this rate.  Today's challenge is to find the rock art which is somewhere around here.  Out with the free map which gives us a guideline as to where it is, showing the road etc but not showing all the other roads so it is a bit of pot luck.   Great fun, far more enjoyable than finding things too easily.  First we have to head into Kalumburu to get some bits and bobs from the store, fishing bait for Alan who fancies 'dipping his rod!!!', and to get a stamp to post another card off to Mum (I missed the post by half an hour and the next collection is not until Tuesday lol).  While in the store we got chatting to the OZ running it with his wife. This store is not run by the Mission and supplies most of the indigenous folks along with tourists with their main supplies.  We were asking him what the Aborigines do around here as all we see is white folk doing the work and he told us they do nothing, there is nothing for them.  He then went on to tell us more about his grievances with trying to keep the shop supplied and how he is up against one challenge and then another.  The supplies come in by barge a couple of times a month and the company charges $1.50 per kilo in weight, that is fine for luxury goods but it also includes essentials.  The government is pushing for more fruit and veg to be available to the Aborigines, all of which is shipped in on the barge as nothing grows here.  Due to his shop being a private concern there are no concessions obviously even though he appears to be the only one selling these vital supplies.  The mission shop has some but from what I see sells mainly ice-cream, milk shakes, chips, pizza, fried chicken and kebabs of some sort or another.  He has tried through him MP to see if assistance with the shipping is available but alas as this is Western Australia and not the Northern Territory nothing is available.  We asked why fruit and veg is not grown locally, it would give the people something to do and the town is situated by a river.  Electricity, telephone, and satellite are all here so why not some sort of cultivation.  We can see the land is very rocky but with some planning surly it would be possible to create an area where basic items like potatoes and carrots could be grown.  Apparently, most of the land floods during the rainy season and the high ground is owned by - guess who - the Mission.  After some discussion the mission decided to allow the higher land to be used to grow produce, preparing the land started, plastic was laid to retain water etc then last week the Bishop, who we are told, is a shrewd business man, changed his mind.  How typical is that.  I am chomping at the bit as you who know me will understand.  It makes my blood boil to see religion and politics being used like this, almost a way of keeping supremacy through blackmail, maybe that is a bit strong but it is how I see it at the moment.   Now I will not go back to the Mission shop, I won't support an institution which to me is not  helping the people as it should be.  It is so sad here to see no smiling faces, just emptiness.  Maybe all the smiling faces were the busy people who were working and we did not see.  The last thing I would want to do is talk cheaply or without sensitivity about a community that I know little about and I am probably barking up the wrong tree but I am only speaking as an outsider who has fallen in love with this place and what it has given us, especially at Honeymoon Bay, unspoilt beauty of nature; no manicured lawns, no AC, no facilities other than the dunny etc (once you get round the corner from the main set up that is.  The dilapidated look of the area is all part of it's charm. I guess the place suffers from the general problem of what to do with broken down metal parts that are too costly to remove from the area).  Strange though, how it is not too costly to bring the items in!!!!!!

OK enough of me on my high horse, time to find the WWII plane wrecks and the rock art <g>. Just past the air-field, hang a right and meander along tracks, should be around here somewhere :)  There we are, what looks like two planes that have crashed or were bombed during the war.  Alan was explaining what all the bits were, engine should be on there, here is the rear landing gear etc. 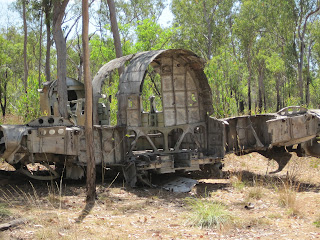 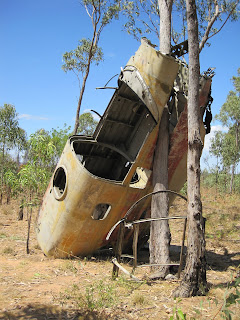 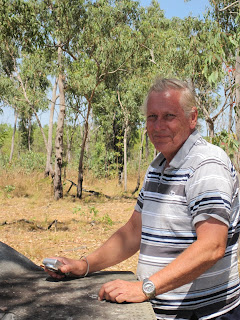 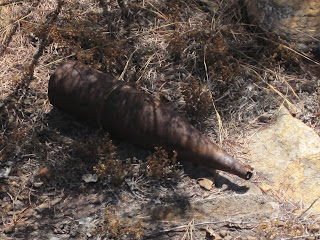 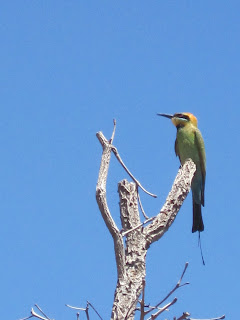 Right, got the pics, time to move on and find the rock art.  Not far out of Kalumburu is a walk, favourite of somebody called Father Anscar, and along the walk is the rock art we are hunting for.  Still not need for a guide, much more up our street to go exploring and find it ourselves.  I wish I had had put my walking boots on for this, neither us us really expected to walk far but one just has to look round the next corner and the next and the next and by gum does the grass have spiky edges <g>.  It is an amazing place, one can imagine cave men living here and no doubt a bunch of undesirable wildlife which so far has not shown themselves.  There are two main types of paintings, Wandjina which are spiritual and Gwion Gwion which are elegant figures.  How cool is this, the English name for Gwion Gwion is 'the Bradshaw figures', got to find those.  Just in case we don't see them I did buy a painting in the shop this morning by a local artist of a 'Bradshaw' figure, to add to my collection of memories.  Right, back to the rock art hunting, we found three or four different examples and maybe one other that we are not sure about.  Some were the Bradshaw figures other were different images and one was the traditional handprint we so often see in history books.  This is a lovely place and has a certain sort of mystique about it,  the rocks are out of this world, big. colorful and outstanding shapes, another feast for the eyes. 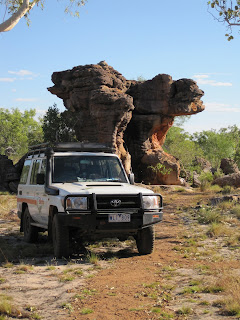 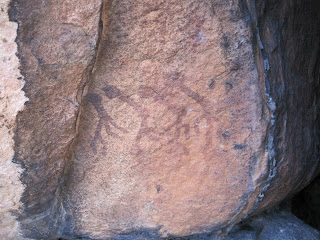 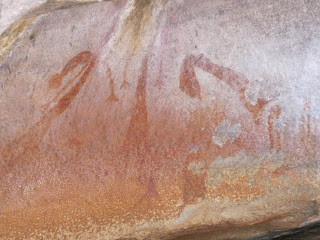 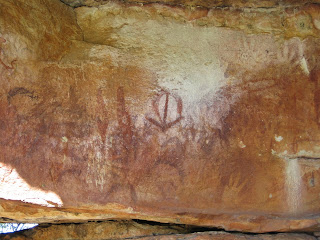 Now for a bit of fishing, I did not realise we did this today (am filling in the gaps several days later) but the photos are dated and I assume are not lying <g>.  After last night dinner of freshly caught fish my mouth is watering in anticipation of Alan's catch, I hope it is not a spaghetti bolognaise night. 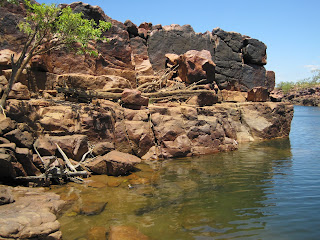 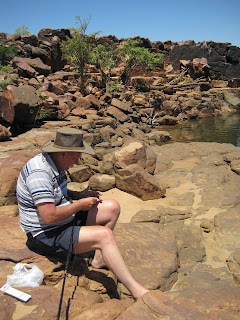 Time for a cup of tea and explore another unmarked track heading to the beach. 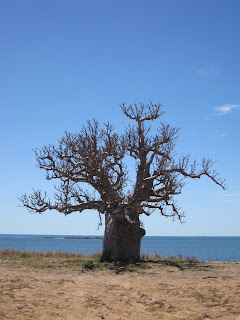 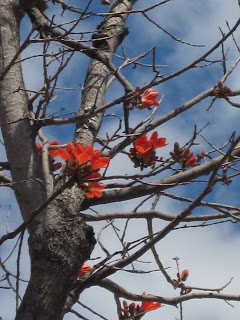 Before heading home to our tent Alan has one more place to explore today, the old Mission settlement at Pago Creek.  There is not much there now, just a couple of posts and apparently evidence of a bakers oven but it is a good 4x4 wheel drive track so good fun.  We didn't find the mission but we did find the old landing sight during WWII and what a mess.  Shall I get on my high horse again.  The whole area is littered with oil drums, rusty cookers, fridges, prams, car wrecks etc, they are everywhere you look.  Again, we have asked why and the answer is the cost to remove the items is too great.  Funny how the cost to get them here in the first place is acceptable.  At the landing site there are an abundance of rusty oil drums left over from the war with USAAF (United States Army Air Force), there must have been a couple of hundred of them left in this location alone to rust away in an unsightly mess. 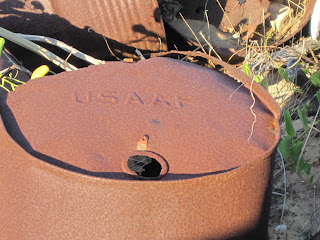 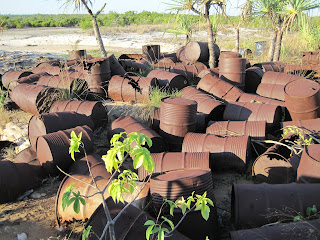 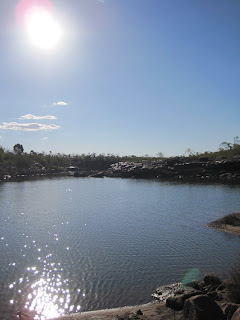 Part of the armed forces responsibility everywhere in the world along with business responsibility should be to clear up after themselves, talk about polluting the environment.  The image going through my mind at the moment is of all the equipment paid for by tax payers to a forever complaining about cutting costs and lack of equipment armed forces. Is the state we are leaving Iraq and Afghanistan along with all the other places we say we will help anything like this, we know it is!  Shame on us.

To get to this location was a breathtaking drive for me, Alan was laughing at me constantly asking if he was sure the car could do it.  No problem, over more rocks and then a river which looked too deep for me but I was informed was only about 6 inches deep. I really think it was deeper in places but what the heck so long as I did not have to swim with the famous salties.  Unfortunately all the images I took are on video and I don't seem to be able to upload them successfully via the mobile network.  On the way back we got stuck in the sand so down with the tire pressure again.  About ten minutes later Alan wanted to stop for a cup of tea, (it is great carrying the kitchen around in the vehicle, tea on tap whenever the desire presents itself.  This time 'no, we were not going to stop', the sun was coming down and I did not want to go back across the river in the dark, we could have our cuppa on the other side <g>.

Home safe and sound, no washing tonight, no fish to eat but we do have a couple of beers left and and plenty of tinned and dried items to digest and there is always the spaghetti minus the still missing cheese.