A mammoth journey, we left Halls Creek at around 10am heading to the Tanami Road which would take us to the Stuart Highway and then onto Alice Springs tomorrow. 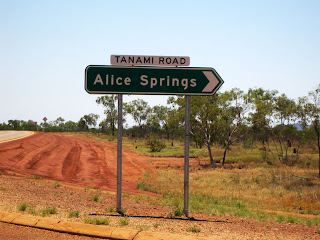 En-route on the Tanami Road, a graded road 1000km long is Wolfe Creek Crater about 154km from the turn off so we must go and see this, and with there being a camp site seems like a good place to break the journey saying as we have set off quite late.  We have never seen a meteor crater before so now is our chance. 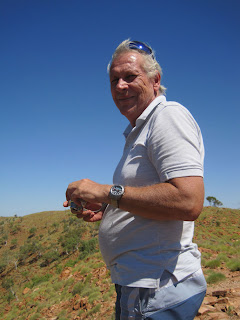 Video of Wolfe Creek Crater
As I mentioned, we plan to spend the night here but when we saw the campsite we looked at each other and nodded our head - no.  It was very hot and there were hardly any trees which meant no shade, no birds etc.  It would be hard enough putting up the tent in the heat but then there would be little to do for the next 12 or so hours.  Plan number two, continue driving on the Tanami Road to the next roadhouse where we could get extra fuel then onto the next roadhouse at Rabbit Flat and camp there, we should arrive around 6pm all being well, perfect.  There were three gates going up the road to Wolfe Creek Crater and obviously three coming back out and guess who had to do them!!!! 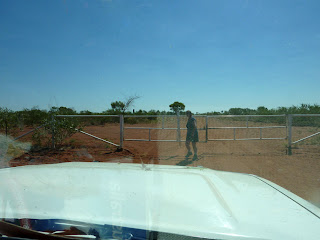 Oh shoot, we missed the first roadhouse for fuel at Billiluna, not a big problem we have enough fuel with us to get to Rabbit Flat and we are also carrying a spare 40 litres just in case which we have had with us since Darwin.  What a fun road, a real tit bouncer lol.
We had to take a second look, wild horses and what beauties too.  It seems strange seeing wild horses, so used to only seeing them in stables as pets. 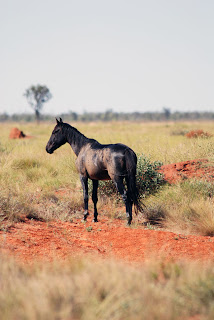 Next bit of excitement on this tit bouncing road, the sign for Northern Territory, time to say goodbye to Western Australia and hello again to the NT.  Shame about the graffiti on the sign, but I should add, there is far less graffiti here than in the UK!! 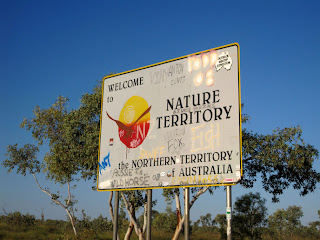 We passed an Aboriginal family who had broken down, they needed a new tube for their tyre, we did stop but they were fine.  Onward we went to Rabbit Flat. 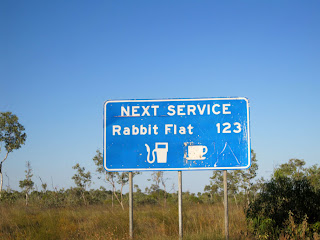 Phew there at last.  Oh - it is all dark, looks closed.  Since reading the blurb we have found out this place is only open 3 days a week, unfortunately our maps did not cover this area and it was not in the book we were using either.  We sat and contemplated our next move when the aboriginal family we had stopped to offer help to pulled up, they remembered us <g>.  Around the back they went, hammering on doors, calling for the guy to open but nothing.  They asked us where we were going, Alice our reply.  We told them we would just camp here and get fuel in the morning, not a problem.  They advised us not to camp here, not safe but to go a little further down the road where there was a site but we would have to pay, just past the bus.  Ah bless their cotton socks, we thanked them and headed on our way.  What bus, there was a crapped out mini bus just 20 feet from where we were talking to the Aboriginal guys but we did not think they meant that one lol.  No other bus, no campsite, nothing but a long rutted road ahead of us.  We pulled off to the side of the road about an hour later for a tea break and boy was it getting cold but the stars, oh the stars, there must have been millions of them visible.  Alan filled up the tank with the 40 litres we had and I took over the wheel to give him a break, (the only two times I have managed to get behind the wheel are in the dark :)  With quick calculations of fuel economy we knew we were not in trouble, we could make the next roadhouse easily if we drove no faster than 80kpm.

I drove for about two hours then nearly ran into wildlife - flipping cows, loads of them lying on the side of the road sleeping or ambling across the road.  During my time at the wheel we stopped to help another Aboriginal group who had car problems, again they were OK but they asked if we had any sandwiches with us.  Nope, but we do have biscuits, that cheered them up.  Time to hand back to Alan and get my two matchsticks out to keep my eyelids open.  We can't remember the exact time somewhere around 1:30am Western Australia time or 3:00am Northern Territory time we came to the next roadhouse, a Aboriginal settlement at Yuendumu, plenty lights on but we could not find the petrol station and it felt a little unwise to keep driving round.  We pulled over to the side of the road and tried to get some sleep, I grabbed a sleeping back and we each had a couple of pillows.  After a hour or so of dozing we decided to move on again, knowing we had enough fuel to the next roadhouse, Tilmouth Well, they had a campsite but too late for us as they were closed when we arrived.  We pulled up a side road and kipped for a couple of hours before they opened and the sun said 'G-day mateys'.


Tilmouth Well, opened at 7:00am, oh how welcoming to find somewhere warm that served coffee and grub.  A bacon and egg sandwich has never been welcomed more.

On the road again, a tree, yep time to stop for a cuppa and get the cameras out. 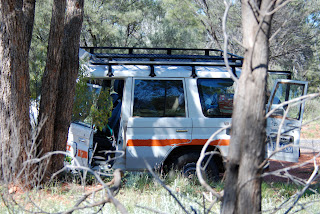 On the road again, not far now to the Stuart Highway where we will hang a right to Alice. 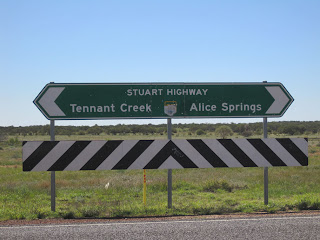 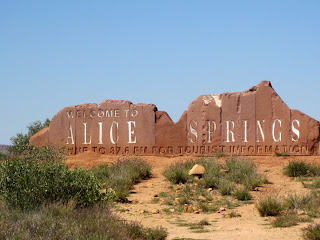 Done it, arrived safe and sound and none the worse for wear on our epic drive.  A total of 1067km covered, Alan did 90% of the driving and as you can imagine we are now somewhat exhausted.  A rather nice wee place is our bed for the tonight and tomorrow, Desert Palms Resort.  Our plans for tomorrow, the Visitors Center to check for permits needed to access the parks containing Kings Canyon and Uluru and maybe a bit of shopping if I can twist Alan's arm.  Off to find some fast food for our bellies, a cup of coffee and hope there is a good film on tonight to watch.  Night all.
Posted by Mimi at 9:57 AM