More folks came into Curtin Springs last night more drowned out than us, it looks as if one has any chance to get a roof over their heads then the opportunity should be grasped with both hands.  The wind howled and the rain lashed down all night and this morning we woke to still more rain, more thick dark clouds and big muddy puddles.  We have to go to Uluru and take our chance that we will see this magnificent rock in all her glory but we knew our chances were slim.  At least there was a visitor center where we could kill a few hours and learn something of the magic of this place and there was always the car to keep us dry as we drove around.  I asked in the visitors center what the weather forecast was for tomorrow and was told more cloud and rain but it should clear by the weekend, too late for us, we must head back to Alice on the 8th and return the vehicle on the 9th.  I was told by the rangers that we were so lucky to see 'water on the rock' a phenomenon seen by only 1% of visitors, I think they were trying to cheer me up <g>.  In the next sentence they told me I could always buy a postcard of the sunset to which I replied, if I couldn't take the photo myself I didn't want somebody else's Photoshoped version!!!!  They laughed.  After the visitors center we did one of the short walks to an area we were told by the rangers we would get some great pics of water coming off the rock. 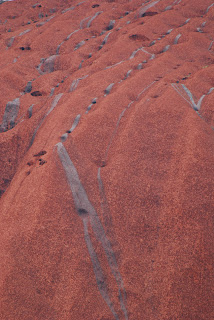 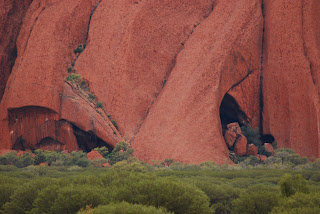 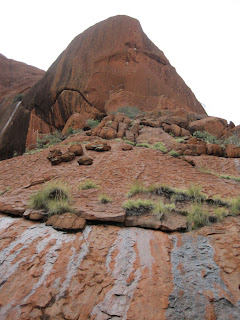 Next a drive around the rock to another section where there was another waterfall.  The rain did stop and instead of rain we had showers but no sunshine worth speaking of. 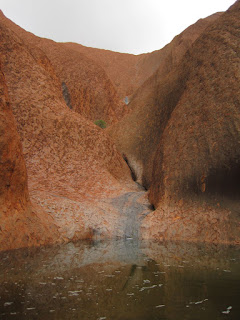 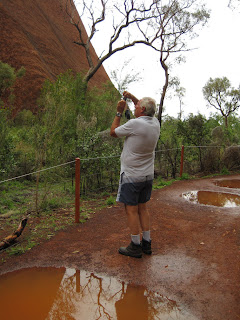 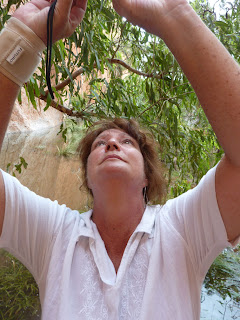 We spent a good couple of hours investigating what we could then decided to check out the sunset viewing area, just in case the sun came out later, it gave us a good idea of what to expect.


Next stop was a drive to Kata Tjuta, another sacred site and consisting of 36 weathered domes, worth a look and it killed more time and meant we could stay in the car for a while.  I feel a bit bad about including this pic here and maybe I shouldn't have but it is part of today's story. 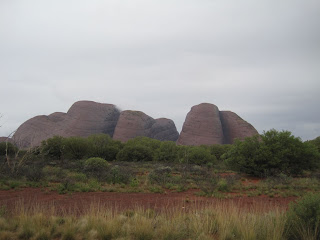 Kata Tjuta appears to be another magnificent place to visit and equally sacred as Uluru but without the sun it looks so sad and gray.  We chatted to a chap in the car park who had just returned from doing one of the walks - Valley of the Winds, a 7.4km trek, and he was saying the waterfalls were magnificent.  Neither Alan or I are sure if the folks here know what a waterfall is <g>, to us it appears to be water seeping from the rocks with occasional drops of a few feet where it is trickling over the edge.  Again, we have been spoilt with Africa with the sights of Victoria Falls in Zambia, Murchison Falls in Uganda and Thompsons Falls in Kenya.  Time to head back to the sunset viewing area at Uluru, just in case!!!!!  Constantly looking up and hoping to see a clear bit of sky the sun would have a chance to shine through we were rewarded with a sliver of blue, if our luck held it might just be in position to catch a few rays of sunlight on 'the rock'. 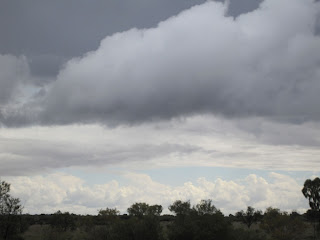 I think we were at the viewing area for about 2 hours, making sure we did not miss the chance of at least one nice picture, (between us we took about 400!!).  Thank you nature yet again for obliging, the sun and the sliver of blue sky sidled into position for a few minutes and we captured the moment. 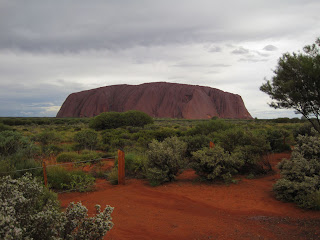 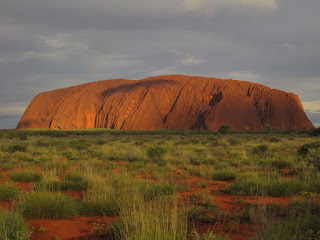 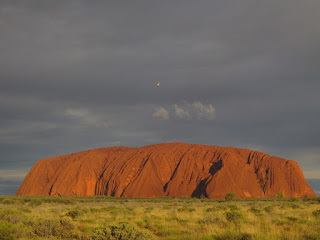 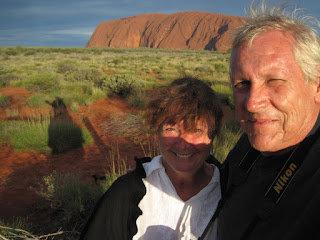 Looking behind us at the sun was a magnificent sunset too, I think these are two of the most beautiful pictures I have ever taken. 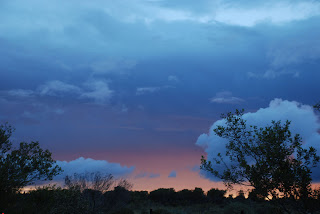 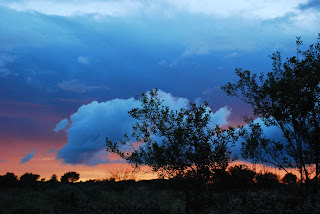 No longer with a heavy heart which I had carried around all day.  Since I first heard of 'Ayres Rock' when I was a kid I have longed to visit, one of those places that goes down on the 'to  do' list and to be here now and not see the sunset would have like been waiting for the release of a fabulous film then finding the projector is broken on the night you go to see it.  We have seen Uluru, majestic Uluru, in all her glory, a truly magical place, totally awesome, breathtaking in every way :)
Posted by Mimi at 11:11 AM