Before leaving Alice we had two more things to do, fill the vehicle up with fuel and our empty jerry can then take a special picture of one of the roads.  I saw this road sign when we were heading for the McDonnell Range a few days ago but we did not stop and when we came back into Alice after Uluru I did not have the camera handy, and I was driving <g>.  So today, a special trip to get the pic and what a cracker it is. 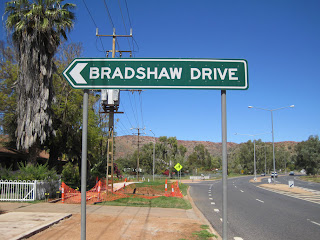 OK got that, time to head north to the Plenty Highway which we will be traveling on for two reasons, we are going fossicking and the road also heads east to Queensland (not a boring tarmac one either, but another corrugate type which knocks about 600km off the distance).  I had no idea until recently what fossicking was so for the other ignoramuses like me, it is scrambling around in piles of rock dug out by miners looking for gems.  We are forever hopeful we will find our large chunks of valuable trinkets to pay for the holiday <g>   The mines around this area in the Central Gem Fields of Australia are full of quartz, mica and garnets.

En-route up the Stuart Highway before we turn right onto the Plenty Highway we crossed the Tropic of Capricorn, somehow this had missed our observations earlier and it took us by surprise.  I am reminded here a story from many moons ago when Mum and I went in hunt of the Equator while living in Kenya.  We were based in Nairobi which is south of the Equator so one day we went for a drive to yet again get the obligatory picture, could we find the Equator, not likely.  John the driver drove for ages, almost up to Nakuru but nothing was signposted.  Heading back we came via Nanyuki on the slopes of Mt Kenya and there it was, the sign we had been looking for.  Nothing like living south of the sign but having to come from the northern hemisphere to find it.  Alan and I have done the same thing with the Tropic of Capricorn, we must have crossed it on the night we traveled across on the Tanami Road from north to south. 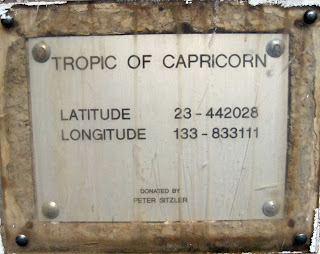 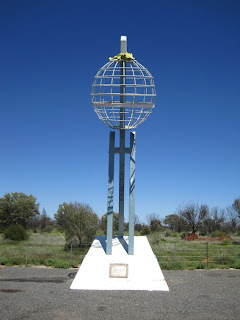 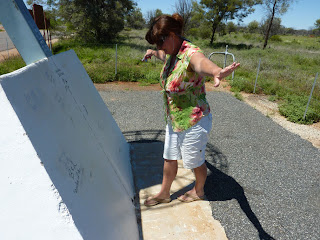 On the Plenty Highway we stopped at Gem Tree so see if we could buy any tools for our fossicking adventure, no luck and their jewlery was not locally made so the only thing we bought was a cup of coffee each before heading off.  Using the map we got from the Tourist Office in Alice for fossicking and the Sat Nav we hunted for the dirt tracks which would take us up into the Harts Range.  Up this one, down that one, round and round we went.  Many of the tracks had been blocked by fences put up by Farmer Jo.  We thought we were doing so well when we found we were on Aboriginal land and no trespassing was allowed (we did not see that sign <g>).  No joy, no further forward but instead we ended up at a house where a very kindly Aboriginal family laughed at us for getting lost and then helped us work out where we were.  They told us the map from the Tourist Office was so out of date it was no wonder we were going round in circles and re-drew where we wanted to go and where the track to Painted Canyon was.  Good-byes said and we were on our way again, yep we found the track and ended up on a dried up river bed, lovely and sandy and a great place for a cuppa <g>. 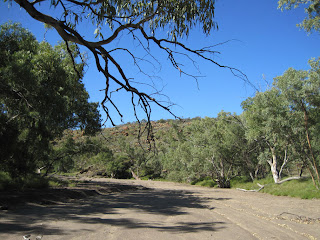 Right, tea drunk, decided to drive back to the main road via the river bed, bit of fun dodging the trees etc.  All was going great until we came to another Farmer Jo fence and had to find our way out once again.  Time to give up on that and head further down the Plenty Highway to the Harts Range Police Station where there was another track to a group of different mines.

We are trying to work out why there is a racecourse in the middle of nowhere, there does not seem to be anybody living here who has horses.  Is this another white elephant to generate money or was some local authority in need of finding a way to get rid of surplus cash we will never know.  Onward and upward into the Harts Range to the campsite.  Now what a lovely campsite, showers, toilets, painted fences and all looking quite new and no campers either, we could have the whole place to ourselves.  We could use this but we might find something better further up and the more challenging the road the more likely nobody would go up it to collect the valuables lurking there.  My heart has missed several beats seeing where Alan is taking the vehicle, I would not dare!!!!!! 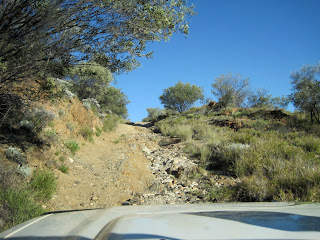 Look what we found, an old miners stone hut complete with stove, fire-place, concrete floor and even a section of floor covered with pink linoleum, looks like a pretty good home for the night.  We did our first bit of fossicking, would we be rewarded with the biggest garnet in the world or not.  Alas no, this was a mica mine, strange stuff and another lesson for me in natural materials.  I had no idea what mica was so Alan gave me the run down, it used to be used for electrical insulation and in radios before synthetic materials came into use.
We did not bother with the tent, just blew up the air-beds, got the sleeping bags and pillows sorted and looked forward to another night under the stars with no light pollution.  Alan lit the fire, I cooked the dinner, (baked beans and sausages), downed a couple of beers then settled back to watch the sky come alive with stars, oh, so many stars.  Alas no sunset picture again as the sun set rather quickly behind a hill and was nothing spectacular.  We could show you the pictures of the stars but you would only laugh so better not bother instead we will finish with a picture of a kangaroo, the 5th we have seen since arriving in OZ. 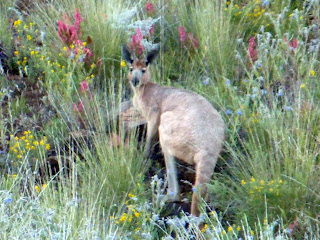