Oh how I loved colouring this image. Lotus Mermaid by Aurora Wings although it did take me two goes lol.  The first time I coloured the image I created the background with Pan Pastels but really was not happy with the end result so with a heavy heart and no time to think I screwed it up and put it in the bin.  Back to the drawing board and I opted to go for a digital background. 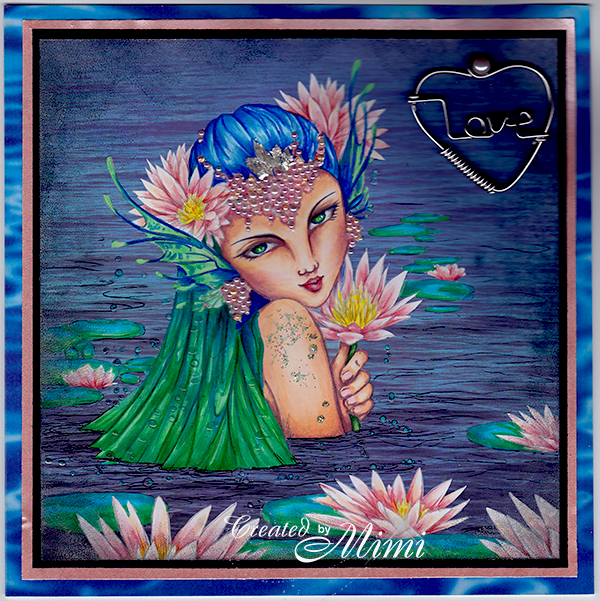 The image is originally created as a rectangle but I love squares so I took a couple of the flowers and copied them then moved them to a different location using Photoshop (the 2 on the right side of the image).  I then printed the image at 20% opacity as I wanted a no line technique, not something I do very often but I rather fancied the challenge this time, talk about making life hard hahaha.  The image was then coloured with Copics, about 42 different colours by the time I had finished and then to sharpen some of the hard lines I used PrismaColour pencils.  To finish off I used a blending stamp and stamped around the edge in black and a bit of silver, added liquid pearls to the head dress and the ears and some mica flakes also on the head dress.  Now I will let you know I hated that too but I had come so far and did not have the heart to bin the colouring a second time.  I used my usual Rangers Liquid Pearls but they are getting a bit old and grungy, think they are heading for the bin and need to be replaced and some Papermania new ones which were dreadful, they looked like plastic.  So, holding my breath it was out with my craft knife to try and pick them all off.  Thankfully I got most of them off without damaging the colouring, I think I must have help there from another dimension :) and I ended up using lots of tiny flat back pearls I have instead, much happier with the result.  Instead of a sentiment I opted to used a metal heart with the word Love in it which I have had for donkeys years and covered the loop for hanging it with a large flat back pearl.  To mat the card base I used water effect vellum and matted the image first with black then a metallic peach paper, simple but all that was needed.