Hello folks.  We have another challenge at One Stitch At A Time so how about popping over to see all the fabulous creations by the design team.


With our challenge theme this week being favourite things I just had to choose a pig digi to work with.  Always having had a soft spot for our very intelligent four legged pals and collecting 'Piggin's' ornaments for several years in the past I will let you know how it all started.  I had only been married a short while and this time was living in Nairobi, Kenya.  Our house was on a corner and was regularly used as a short cut by folks walking around which really annoyed me.  Hubby and I had a couple of dogs but they didn't mind the trespassers so I invested in a piglet who we called Kirsty.  Kirsty was fully house trained in three days, yep intelligent for sure and she continued to live in the house for several more months until she destroyed my kitchen one early morning as I had not given her breakfast in time.  From the house to the outside world she was sent, mind you, she was not far off full grown by this time.  I can hear you asking why on earth would we get a pig as a pet.  All the houses around us had large fences and floodlighting for security but we decided, knowing our native inhabitants were not keen on pigs to get Kirsty instead to ward them off trespassing on our land.  At the same time I let a wee rumor spread that we had been visited by a witch doctor who had put a spell on our land - any trespassers would suffer some hardship etc.  Both ideas, or maybe one or the other certainly worked, all the houses around us were burgled but nobody came near us :)  Alas, poor Kirsty had to find a new home when our daughter was about a year old as she thought she was a dog (no not the daughter, Kirsty), if you scratched her tummy she laid down and rolled over like a dog.  Knowing she weighed rather a lot and our daughter was using her as a walking frame I was a little worried Kirsty would lie on top of Natasha and squash her.  In the picture below you can see Kirsty with me holding Natasha as a new baby on her back. 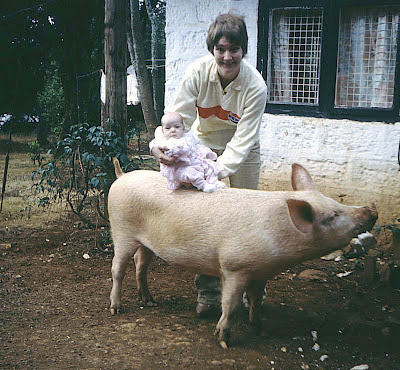 Now onto my project which of course features a pig.  The digi was created by Stitchy of StitchyBear Digital Outlet called '3 Little Pigs'.  As the name suggests there are three pigs in this set of which I have only used one.  After many ideas on what to create with this fab digi I settled on the text 'Pig Out' and built the project around that.  So, I have created a bag with Pig Out and the digi on the front and covered three bars of chocolate with Pig Out wrappers to go inside the bag. 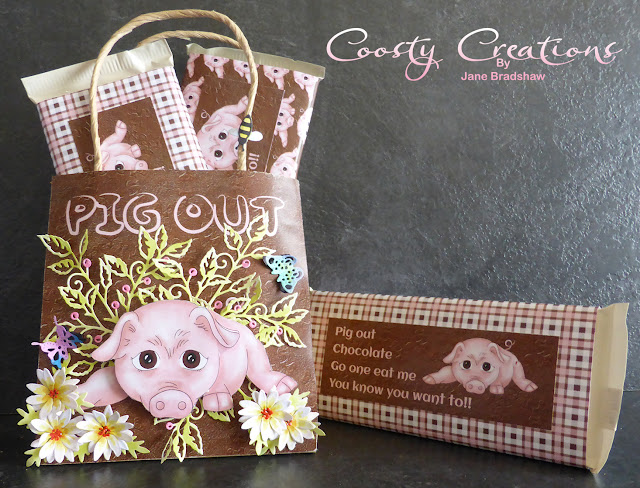 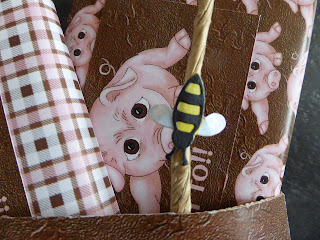 Ahhhhh - such a cute wee bee, this is a new die I got and I just had to used.  The die is by Elizabeth Craft Designs called 'Bees'.

I would like to enter this project into the following challenges:-