Well this is a bit good, so far everywhere we have been there has been mobile access.  Downside of that is for mobile access to exist there are humans too.

After leaving our little sandy campsite yesterday we headed further north, planning on visiting the Pinnacles in the Nambung Nationl Park, near Cevanties, and then hopefully a campsite on the beach.  It was a very cloudy day, not much good for photographs but fingers crossed we will find something.  Before heading off we took some photos of the flowers around our campsite, most are very tiny but I did find this beauty. 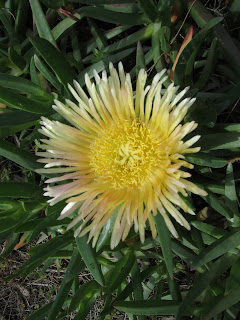 All packed up now and ready for the off.  I wish the UK would learn how to plan and carry out roadworks, the Aussies seem to have it right, no 3km stretches of cones with nobody working, instead only the area being worked on is coned off and humans at either end controlling the traffic flow, so much more sensible!!!! 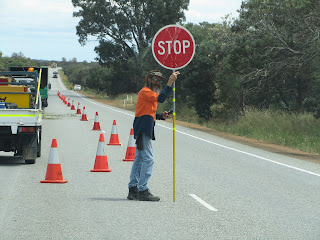 And onward we traveled, watching the gray cloud overhead and wondering if the wind was strong enough to push it out to sea before it dropped it's load on us.  What do you think, were we lucky or not??? 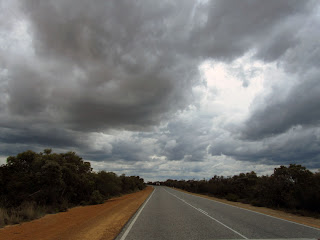 We turned off to go to the Nambung National Park, home of the Pinnicles but stopped at Cervanties to replenish our supplies.  We needed a new Butt Bucket as Alan stood on ours yesterday and smashed it to smithereens, some pineapple juice for Singapore Slings, more fly spray and a wind breaker in readiness for our night on the beach.  Cevanties reminded me of Seahouse for those who know Seahouses, with one big difference - no amusement arcades, no bingo halls, no parking problems, no tat!!!  It did have a shop just like Makays selling all sorts of touristy and beachy things (OK, that is tat), a Liquor Land, a caravan park and a fish and chip shop etc.  We got everything we needed with the exception of the wind breaker, I am not sure if they are called something different here or they just don't exist.  When we explained what we were looking for - a long piece of canvas with stakes at intermittent distances in it; they knew what we were talking about but were unable to come up with the name of what it was called.  We did find a jar of Marmite though.  Now I have a problem, this is FAKE Marmite, our Marmite, as in the real Marmite comes in a jar with a yellow lid and has it's own website www.marmite.com  and just beside the FAKE Marmite were packets of Tim Tams, we had to have them too <g>  Tim Tams for those who are unaware of what they are, are chocolate covered chocolate biscuits, we had our first taste of them in Saudi when Mich brought some back for us.
Now for the Nambung National Park, I hope you read the link earlier to discover all about the Pinnacles.  I am just going to post a bunch of pics here for you to view. 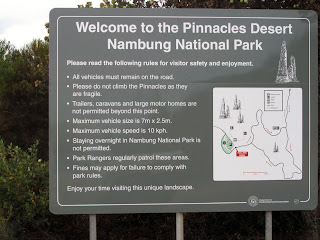 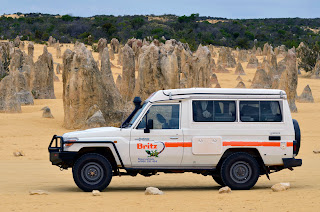 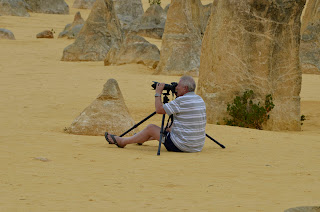 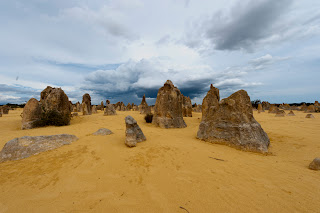 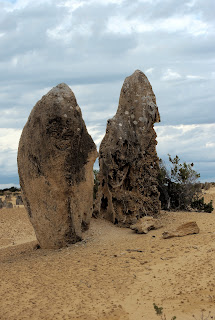 Time for us to leave and find somewhere to set up our home for the night.  The ever looming black cloud is still hovering overhead so we will bet all our chips it is going to rain tonight.  On our map it shows another bush camp (a blue tent which means camping allowed but not facilities - just what we are after).  Alas, once again the bushcamp does not exist any more, somebody has put toilets there and is now charging 15 dollars to stay the night.  Not that we mind paying the 15 dollars but toilets also mean people and sure enough there must have been about 20 caravans and camper vans.  Time to move on.  Now this was becoming challenging, everywhere we looked was either a driveway to somebody's house or had a sign at the entrance saying 'No Camping'  but we will not be beaten, even to the point of becoming very cheeky!!!!  In the end we found one road with no signs as we drove past.  A quick turn around of Winston and head off down it to see what we could find.  Sandy yes, but that is not a problem, even when we came to a steep bank Winston could not make it up.  Alan was all prepared to let the tire pressure down but I thought it might be a good idea if I walked up the hilly bit and along the track to see if there was anything.  The track went on and on and on and on with no turning places  for Alan and Winston to make our escape in the morning.  No good so I headed back to Alan to give him the news.  As we were leaving this track and about to hit tarmac we saw a clearing on the left hand side, more than enough space for us and although by the road and a bit noisy when the odd car passes by it was perfect.  Time to play with some more new toys that accompany Winston.  We raked out the tarpaulin which is packed away under the case in a cubby hole especially designed for it.  OK one thing, where are the poles for it, time to search Winston's hidy holes.  We should really watch the video at Britz which explains where everything is and how everything works but that is too touristy for us and just like last year we handed the video back without watching it.  So much more fun working it out for yourself.  The poles were hidden behind the seat (for future reference).  It was very easy to put the top up which is where our bed is for the night and to assemble that.  All sorted and now time to cook dinner, can you guess what we are having <g> - sausages :).  I have a problem, while walking along the track I must have brushed up against some grasses that don't like me and it feels like I am standing in an ants nest, itch itch itch, scratch scratch scratch, curse curse and more scratching.  I'm hopping around like a real idiot, in the end I reverted to man made meds - get the anti-histamines.

No sunsets tonight, sorry but we do have a movie to watch <g>  Alan brought along a bunch of movies on his laptop for nights like these.  Hope it is something good and not horror!!!