This fortnights challenge has been chosen my Maggie and what a super choice for us over the Christmas period for our challenge and for us to get another Christmas card made lol.

Oh dear, not good.  I tend to make my creations quite a while in advance of challenges so if I need a break then it is never a problem, commitments are covered and I can have a couple of weeks off with no problems. Alas this has just hit me really hard as I have just placed the card image on this blog post and it is the card I made for my Mum who passed to the next world a couple of months ago.  I know she would have loved this card, she was my greatest admirer but now I think I will have to put it in a memory box along with her birthday card with I used in a challenge a few months ago even though her birthday is not until July next year.

OK enough - have to move on.  I used green hammer card and foil embossed the arches then embossed the card with a frame embossing folder the used a Sheena Douglas gold glitter pen to pick up some of the embossed areas.  Next I spatted some gold paint onto the card to give it a bit of a distressed look.  Time to put the base to one side and move onto the holly and bow.  For the bow I stamped a pre designed bow stamp with wee holly on it by Sue Wilson I think using the same green card and a gold stamp pad.  I then cut the bow out, sprayed it with water on the back and shaped it using a pencil before gluing the sections together, these were then put to one side to dry.  Next was the holly using a Sheena Douglas die, the die does have a matching stamp but I don't have that.  Using white card and then a selection of green inks I coloured the sections on both the front and back so they were quite wet.  These were then scrunched up then un-scrunched and shaped and put to one side to dry for a day or two.  When totally dry and holding their shape properly I was ready to move on.  Firstly I sprayed all the holly leaves with several layers of Crafter's Companion Spray and Shine, a lovely light weight varnish which gives a fabulous shine. The green card base was matted onto gold mirror card, the holly was then glued in place with silicon glue then the bow was added and finally to finish off the holly I used red flat backed pearls for the berries.  A simple sentiment tag was cut and the text added using gold peel off stickers.  I made four of this card to give to family members and have to admit, I had a ball, it was a lovely card to make with several techniques.  My sparkle which would normally be with glitter :) this time was with the gold mirror card and the Spray and Shine, not quite sparkle but the effect is similar when the elements catch the light which is what I was aiming for. 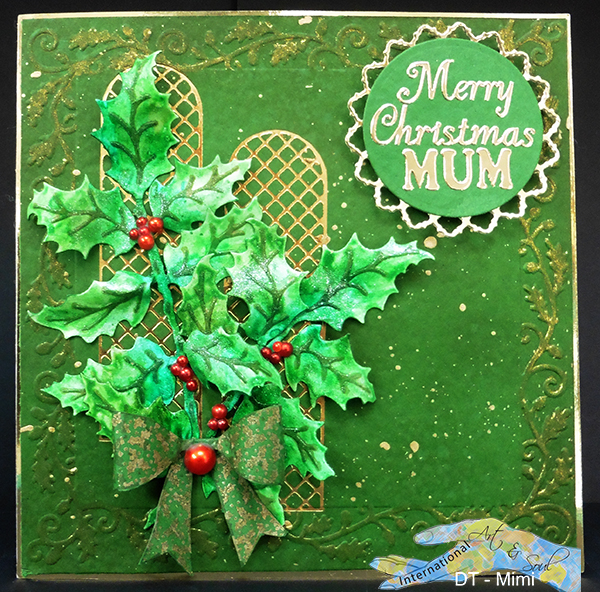 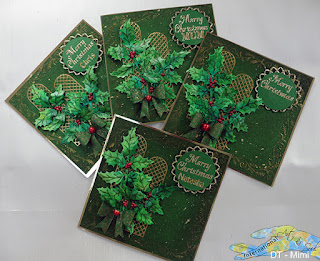