Another canvass from me for this fortnights challenge.  Sometimes when I see the optional theme for the challenge my heart sinks, I know I don't have to follow the theme but this is always my starting point.  I am not a film lover more often falling asleep before the film finishes, I have no idea who acts in what and honestly don't care as I see their character not the fact they are playing a character.  Last time we had this theme a few years ago I think I made a popcorn box and decorated it to look something like it was representing the film 'Avitar', that then went in the bin after it was made and photographed and I find that so hard to cope with, knowing before I start that I will be putting it in the bin.  So, it was with trepidation I began this project on my 'canvass' journey.  I love how this one has turned out and it won't be going in the bin lol. 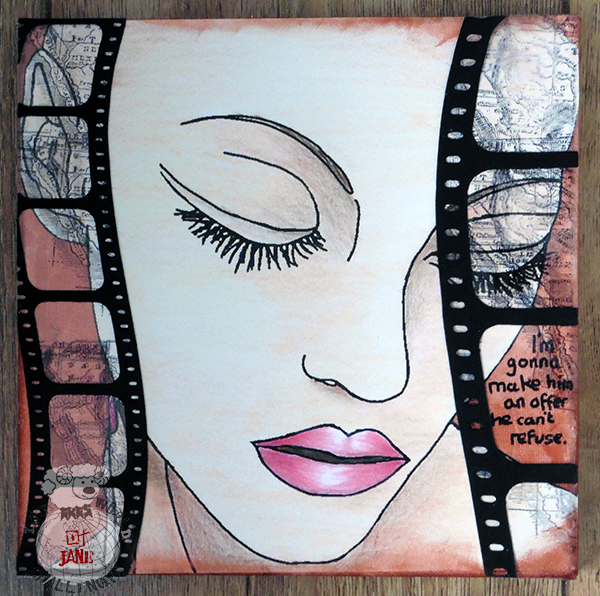 To begin with I used gesso on the canvas and then texture paste with a Sheena Douglas stencil.  You can't really see the texture in the photo but you can in real life.  The canvas was painted with metallic copper acrylic paint and left to dry while I  printed the image on 120 gms paper and coloured lightly with Polychromos pencils.  The coloured image was then fussy cut and applied to the canvass with strong adhesive spray.  The film strips were cut with my die cutter and I then rubber stamped randomly onto plastic and created negatives which were placed these behind the die cuts.  These were then glued to the canvass.  The saying, 'I'm gonna make him an offer he can't refuse', is from the film The Godfather, a bit inappropriate at the moment with all that has been in the news recently.  I don't mean to offend but I do like to raise a point that leads to conversation :) :) :)