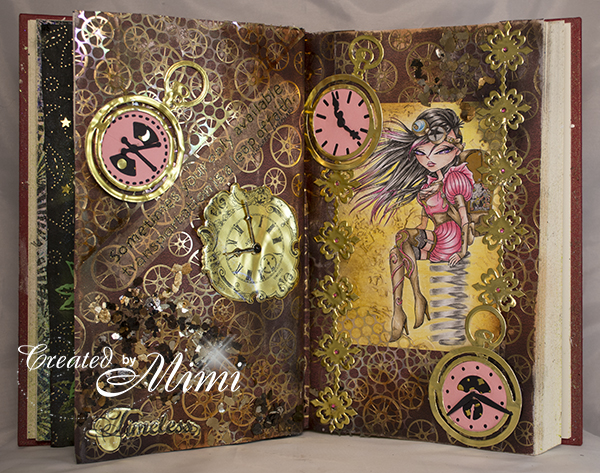 Hello folks, hope you are having a good day.  Today I am sharing with you another journal page using the image Voyager II by Lucy Loo of The East Wind available from Sweet Pea Stamps in digi format.  I had a really hard time with this page, lots of grief and lots of walking away from it only to return a few hours later and ponder some more :)

To begin with I coloured the image with Polychormos and copper Promarker.  For the background I used a clock embossing folder and hammered the areas I wanted embossed - yes I used a hammer hahahah (I did not want to put this through my machine as I did not want the image to be embossed, only the surrounding area).  The image does not come with the spring, I drew that in :) 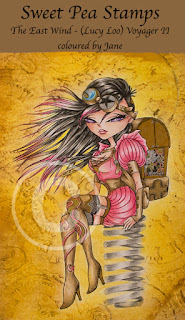 Next I covered my book pages with some paper from Kaban.  I thought the paper would be great but once I had got this far I really didn't like it and that is where it all started to become a real pain in the behind.  I keep trying to find ways to added text other than hand written and found a method of using tissue paper and embossing powder.  The tutorial said the tissue paper would be almost invisible but, well it is a bit transparent but not really invisible enough for what I had in mind grrrrrr.  Next I added some texture plastic in a few areas and then airbrushed the background with black and brown Promarkers) For the dies I used the XCut Pocket Watches die set to make my watches, I also used Graphic 45 659053 clock die set.  Another Sizzix border die was used and finished off with tiny pink gems (I managed to drop all the gems in the packed onto the floor, along with a whole box of tiny brads - as you can see this has been a trial of tribulation from start to finish hahaha).  The dies were nearly all cut using gold metal sheet, pink and black card were also used for the watch faces. The sentiment btw reads 'Sometimes your only available transportation is a leap of faith' which I thought was rather appropriate to go with the image and the spring the girl is sitting on which I added - anybody fancying this form of transport really would need to have faith :). 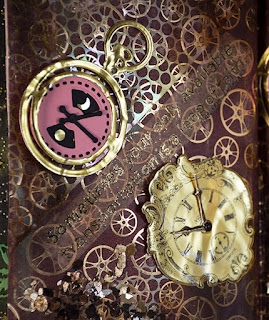 The final bit of work on this was to add Stampendous Frantage Micra in copper, bronze and gold, lots of yummy texture :) 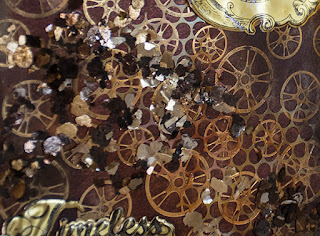