Cold, tired, stiff, uncomfortable, miserable, and probably another bunch of adjectives describe our night last night - not much fun but we have been so lucky with the weather up until now we can't complain.  In all honesty, although it was miserable trying to sleep in the car with either no air or the rain coming in through the one inch cap of the window, we would not have missed last night for the world, what an experience and it is experiences we have come to OZ for.  I am still cross with myself for not having my camera on the go to share the show with you, it was breathtaking, awe inspiring and was just another example of nature showing how small and meek humans really are compared to her capabilities.

Sometime during the night Alan managed to make a cup of coffee to warm us up when the rain looked like it might be stopping, yummy, hot, strong and laced with sweetened condensed milk <g>.  Bless the dawn, a welcome sight I can tell you.  Time to sort the disaster area, thank goodness we did not bother with the tent, with half the tent pegs missing and being in a sandy location the thing probably would have collapsed on us with the wind - sorry, did I forget to mention the wind getting up during the night too <g>.  The air beds were sodden, the chairs no better but the sleeping bags and pillows came to the car with us and were nice and dry.  We did our best to pack things up and were back on the track heading for Kings Canyon by 7am.

Boring drive, once Alan had negotiated the track back to the main road which was now pretty soggy in lots of places, it was a stretch of tarmac which greeted us then another corrugated, graded road for about 280 kilometers. 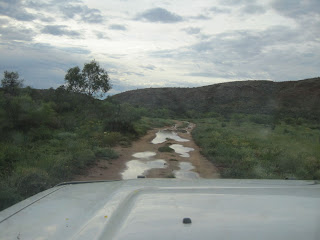 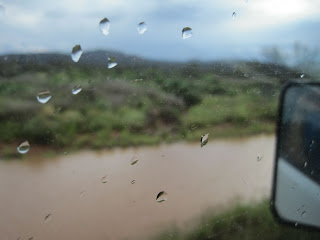 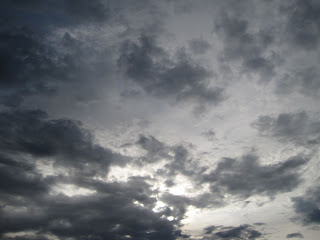 During our drive to Kings Canyon we picked up a hitch-hiker, a frog on the bonnet of the vehicle.  We have no idea how he managed to jump the 3ft onto the bonnet, maybe he accompanied the water as we splashed through one of the many puddles or maybe he fell out of a tree and landed on us :)  He/she clung onto the bonnet pretty well then hopped off about 5 minutes later. Another picture I should have taken but I was sidetracked watching him.  With all the rain the landscape has changed dramatically, the land is green and spotted with patches of bright yellow and purple where the ground covering plants have come into bloom. 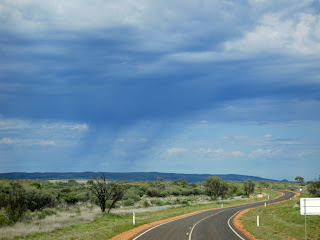 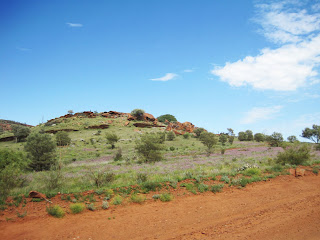 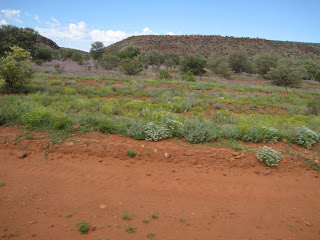 Needing more fuel we stopped at a petrol station, what a great sign they have up. 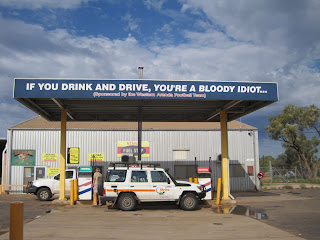 There is a cracking sense of humour here, I wonder if in the UK you would find road warnings and messages like these two:-
A little further down the road (about 100km) we stopped again, the sun was shining and we fancied a cup of tea.  This stopping place was a viewing area so we took the obligatory pictures, made a cup of tea and had sausages and bacon to fill our empty tummies.  Still more rain in the distance as you can see. 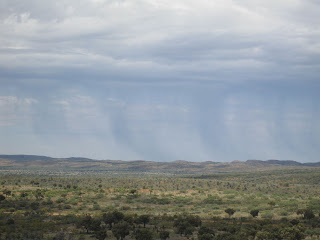 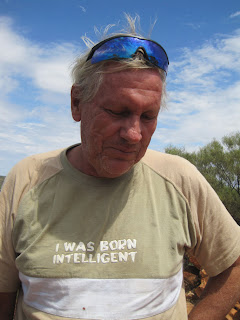 Alan had a cracking idea, get the air mattresses dry, they were unrolled and put on the bonnet of the car, with the heat from the engine on one side and glorious sun beating down on the other they dried in no time at all.  We also managed to get the chairs dried and packed away again all in about 30 minutes, pretty good going. 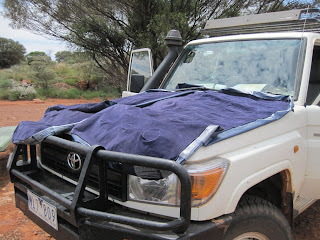 Kings Canyon, I am a little lost for words.  Everybody has told us - make sure you go to Kings Canyon, don't miss Kings Canyon etc but we arrived it was like being back in Mitchell Falls although in a different way.  There were two walks, one through the creek bed at the bottom or one over the ridge.  Having been watching rain clouds while driving and knowing the rain was about to fall again, feeling rather tried after last night and seeing paths ready made with little arrows pointing in this direction or that we opted for the quick route.  It has always been stunningly beautiful on canyon's floors up to now, looking up at the rocks looming above you, changing colour at ever turn but Kings Canyon was not like that.  Plenty of vegetation, so green, small flowers, pavement like paths and people.  We complete the walk and there was a beautiful view at the end then we turned tail and came back to the car for a beer.  We were just in time, the heavens opened again, not as dramatically as earlier but enough to kill the light for photograph and get us soaked.  Not having seen King's Canyon at it's best maybe we have to come back one day and do the walk along the top.  It may require us visiting a gym for 6 months before hand though!!!!!  I am having mixed feeling about visiting here, it is a sacred site for the Aborigines, a place men who have been 'initiated' visit as part of their 'dreaming' and visitors are requested not to go any further by way of respecting their ways. 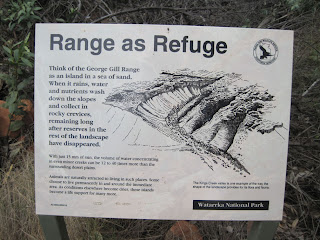 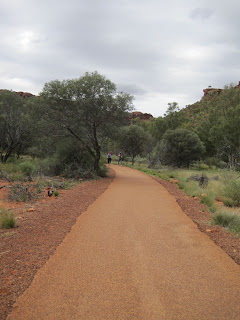 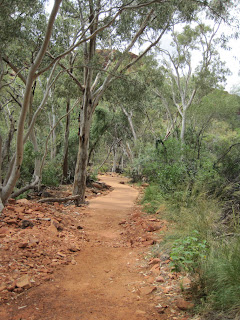 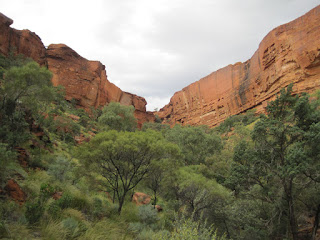 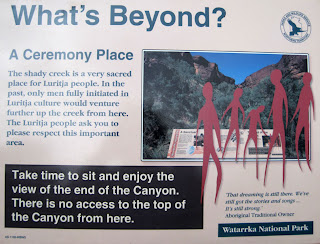 Seeing hordes of people trampling over the ridge and through the creek I cannot help but feel we are trespassing, all be it with permission.  We made the decision not to walk on Uluru for the same reason some time ago.  Did you know Uluru was only given back to the Aboriginal community if 'tourist' would be allowed to walk it, part of the agreement the community had to give in to in order to get something of their sacred place back!!!

Do we camp at the next campsite or head straight to Uluru area.  There was space for camping but after such a miserable night last night we really want a hot shower and a bed, alas no rooms available. 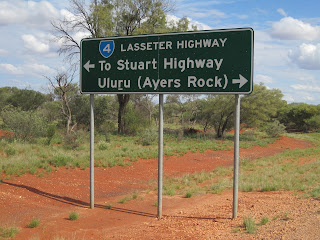 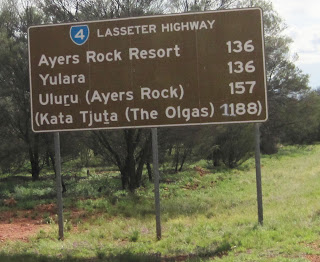 The latter won the toss.  A mound, could it be, it is big, it looks like Uluru.  Well, I have made the same mistake as so many folks, I even read about the mistake but obviously discarded the info instead of processing it properly.  It was Mt Conner we saw <g>. We are now snuggled up in a bed at a place called 'Curtin Springs', about 80km from Uluru.  I have just had 400gm T-bone steak followed by bread and butter pudding and guess what - the heavens are chucking it down again.  At least tonight we can think about all the poor folks who have not made it to a nice warm, dry, bed <g>.
Posted by Mimi at 10:30 AM