What a wonderful night last night under the starts, it was cold but that made it all the more fun snuggling up under the sleeping bags, and the rain stayed away thankfully.  Being caught out in the McDonnell Range was not fun.  We were woken at about 5am by the most wonderful bird song, I think the bird was in the tree above us it was so loud, shame it was too dark to get a picture but Alan did record the 'wake up alarm', alas I have not transferred the video over yet.
We have looked around the mine here and there is nothing of value, just loads and loads of mica so we headed back down to the main campsite we saw.  There are another three mines located in that area which we knew we could walk to but first another cup of coffee was on the cards.

It was only a short drive to the campsite, about 6 km, hair raising at times and took us about half an hour.  Once again the bug spray was applied, water bottles filled with cranberry juice and the walking boots donned.  Alan had the GPS sorted so we did not get lost scrambling through the bush saying as there were no sign posted paths to follow.  Would today be our lucky day, garnets, smoky quartz and rose quarts on the menu.  We walked for about 4km to the nearest mine, interesting to see how the miners from years gone by tackled the wilderness in order to make a living, what a hard life. 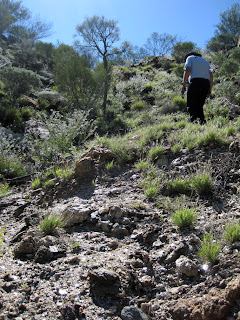 Although our millions were once again elusive, I guess with the map being so old and the campsite looking like it had never been used these mines were cleared out long ago.  We had a lot of fun poking around on the tailings and along the river bed (I remember from school being told to look in river beds for gold which was washed downstream so worth checking that out).  Excitement set in, a twinkle of red, well I think it was red <g>.  I am not sure what I found, either 4 teeny tiny garnets about the size of pin heads or fragments of beer bottles but I picked them up anyway and now have them wrapped up so they don't get lost.  If any of them turn out to be garnets I won't bother getting them polished as there would be nothing left but I will try to get them mounted and made into a pendant just for memories sake.  There was another miners residence and this one had an arga and a safe in it and beer bottles, so many beer bottles lying around.  Were the miners party animals or just bored drunks <g>. I can tell you the guys acquired their beer and stove from Adelaide!!!!!
Time to head back to the car and decide what to do next.  We had done a 9km walk and felt there was  not much else to explore here so time to move on.  We have been told rain is coming and the Plenty Highway is a rough road, best be off it by Wednesday or we may well get stuck and have to wait for it to dry up.  It is approximately  400km to Boulia in Queensland where we decided to spend the night.

I forgot to add here when writing the blog about me taking the wheel of the Land Cruiser.  Giving Alan a break for a while I took over the driving for a couple of hundred km.  I was doing pretty well dodging the ruts and soggy patches in the road and keeping a steady 80km to conserve fuel when I came to yet another 'floodway'.  Most of the floodways have been of little concern and this one looked fine too except it was a bit sandy, slowing down a bit would be all that was needed.  Yep, fine, through the sand and then .............. the last few feet of the crossing, the ground changed and oops a big dip.  I was doing about 60km and nose dived into the dip then took off, and I mean took off, 3 and a half tons of flying car.  Alan laughed as I held the wheel tightly, pointed in the general direction of the road and closed my eyes.  If we had been in any other vehicle I would have trashed it but the Land Cruiser is built to take just such events. This was one place we would have appreciated the warning signs that we see in bad areas but there was nothing.  All safe and sound on landing apart from me jarring my wrist and I kept on going for another hour and a half before handing back to Alan.

We reached the Queensland border at about 5:30pm 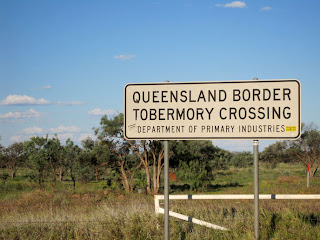 The landscape changed quickly as did the road, from wide open muddy tracks we now had single track but better conditions and the wildlife appeared.  So far  we have seen a handful of kangaroos but once over the territory border we saw loads, probably around 50 in all. 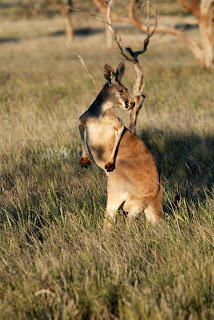 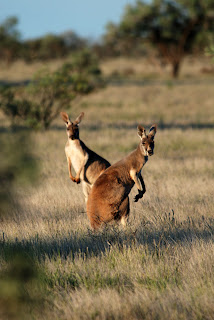 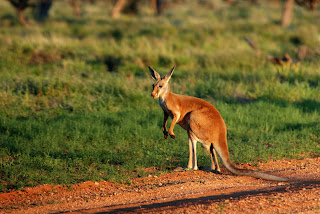 The only other wildlife was cows.  We lost the hills and the trees and found ourselves in flat country with very little of interest (apart from the kangaroos) to keep us interested, no Aboriginal Communities either, very strange. 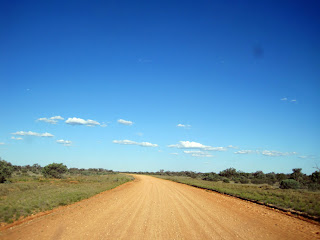 On and on the road went, flat land as far as you could see with the occasional washing machine or some equally strange object marking the entrance to a station. 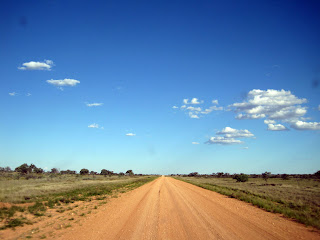 What does the word 'Highway' bring to mind, 6 lanes of tarmac or just a long road <g>.  The Donohue Highway is single track and well the picture says it all lol. 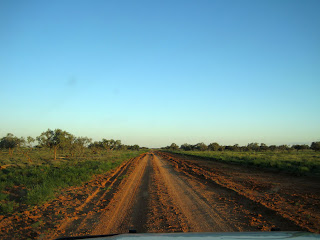 We checked into the Desert Sands Motel in Boulia exhausted with only sleep on our minds.  The lady was so concerned that we had arrived when all eating places in Boulia were closed but we told her not to worry, we had sausages in the vehicle and our stove along with other items we could feed ourselves with, but we really were not hungry at all, shower, coffee and bed were all that was needed.  Nice place and if you ever pass this way worth staying at.

So, to finish the blog for Oct 11 here is another sunset, taken on the Plenty Highway which had changed it's name to the Donohue Highway when we crossed the border. 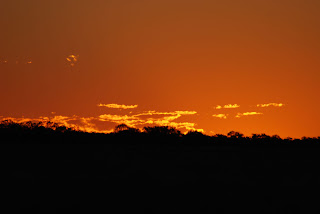