Well today is going to be a very short blog, we woke up to torrential rain in Charleville and wow, so chilly.  Packing was fun a games, we waited for a short lull in the downpour then dodged the puddles and trying not to get soaked chucked the cases etc in the car.  I did take special care with my beautiful pink laptop, it got wrapped up in my shawl to keep it dry. Wouldn't it be dreadful if it got wet and died!!!
Back on the road, we decided to take the long route and stay on tarmac, just to be safe, no point in asking for trouble by taking the unsealed roads. 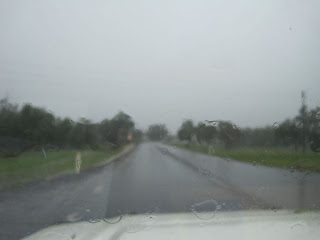 It did not take long for Alan to get bored of driving and I was not offering to take the wheel yet.
Alan really got fed up with the tarmac and about an hour or so later decided to go for the short-cut on the Developmental road to Alpha. Now the unsealed road was much more fun. 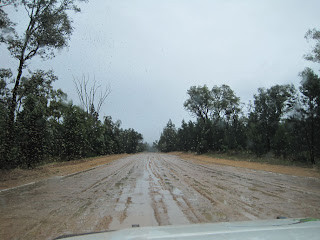 It knocked 200km off the journey and kept us awake playing in the mud, especially when the visibility was almost 0.  Even though we had saved all those extra kilometers it still took the same amount of time as the going was much slower, we did save loads of fuel though as Alan did the whole lot in 2 wheel drive, he did not even bother to lock the hubs just in case.

It rained and rained and continued to rain and was still raining when we hit tarmac again near Alpha.

Once through Alpha we headed along the Capricorn Highway to Sapphire.  We were going to Emerald but a bit of quick research on the net gave us the fossicking maps we needed for a field near Sapphire and Rubyvale where - guess what gems are found there :)

We stayed in another superb caravan park, Sapphire Caravan Park Retreat, this one is the best one yet and our cabin was georgous,  stone walls, large enough to live in and a full kitchen where Alan can don his pinny and play at being Master Chef.  The A'la Carte menu tonight is Corned Beef Hash - ummmmmmmmmmmmmm (not sure about this meal but Alan has been assuring me it is lovely).

NB - the Corned Beef Hash and packet mashed potatoes was half eaten and the remainders delegated to the bin. I don't think it will be made again. I have assured Alan it is not his fault, the quality of corned beef has gone downhill greatly since he last made it over 30 years ago :)
Posted by Mimi at 8:41 AM