This fortnights challenge 'Fairies and/or Elves' has been chosen by Debbie. 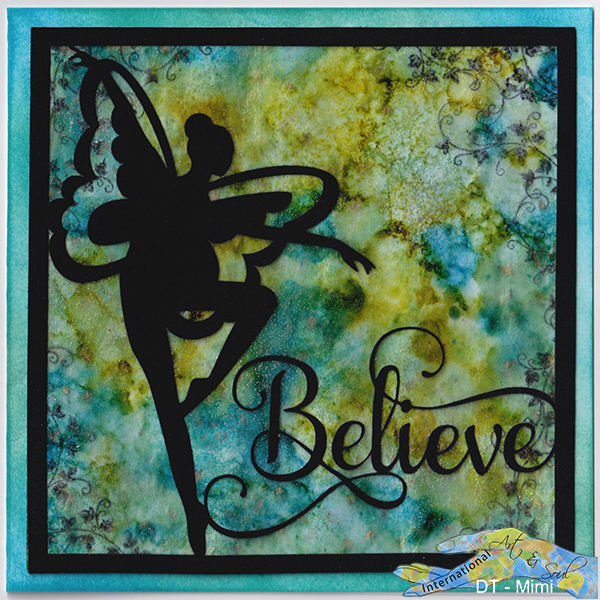 For this card I used a fairy die cut from SVGcuts.com which I have had for years and years lol.  The fairy svg was the welded to the black frame I made and then I added the text which was also welded to both the fairy and the frame.  This part of the designing was done in Illustrator and the file saved as an .svg so I could bring it easily into my die cutting software, Sure Cuts A Lot (SCAL).  I wanted this card to be a bit touchy feely so cut the design out using sticky back felt. For the background I used alcohol inks, a bit of an experiment s I used wax paper instead of Yuppo.  Next was a bit of a boo boo but turned out to work well.  I stamped the leaves then the brain cell worked and I realised the ink would not fix well on the waxy paper so sealed with clear embossing powder.  That worked great and also melted some of the wax on the paper.  That got me wondering if the wax would melt enough to hold some silver and enchanted gold embossing powder just gently sprinkled on top - oh yes, that worked a treat and I was able to have my shimmering background too that I really wanted along with all the added texture the embossing powder gives.  As I scanned the card to get the image the sparkle did not show so I took the card outside to see if I could capture the effect - no really but hopefully you get the idea. 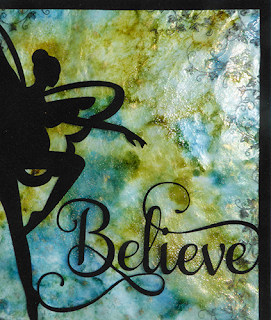