This fortnights challenge UK Myths and Ledgends has been chosen by our DT sister Sall.  Where to start, what to do - go with the obvious St George and the Dragon and make a dragon themed card - no did not want to do that.  We do have so many myths and legends in the UK, well known ones and some very local ones.  The boarding school I went to as a kid had a Green Lady - she would appear every Friday 13th late at night and if she caught you awake she would scratch your eyes out.  Scary stuff for us wee kids, just about as scary as the nuns !!!!!!  The so called real story behind the Green Lady was she was the mistress of the house in times passed and was locked in a secret room entered via a hidden door in the library - sounds like Cluedo might have had an influence in this myth hahaha.  Anyway I did not want to do a beast, a dragon or even the Green Lady so I played on the challenge theme words a bit and used the word 'Legend' - where I live in the UK is very close to Holy Island, Bamburgh Castle and the Farne Islands, all very old areas of habitation - Holy Island - In 635AD Saint Aidan came from Iona and chose to found his monastery on The Holy Island of Lindisfarne. The Christian message flourished here and spread throughout the world.  Bamburgh - was the seat of the former Kings of Northumbria, the castle has been used in many films too (but not Harry Potter, that was Alnwick Castle which is about 30 miles away), and finally The Farne Islands  are possibly the most exciting seabird colony in England with unrivalled views of 23 species, including around 43,000 pairs of puffin.  The costal area here is beautiful but some areas are treacherous, we have lots of lighthouses to guide ships away from the rocks that can't be seen and one of those lighthouses (Longstone) is on one of the Farne Islands.  Grace was born on 24th November 1815 at Bamburgh, Northumberland and spent her youth in two lighthouses (Brownsman and Longstone) where her father, William, was the keeper. In the early hours of the 7th September 1838, Grace, looking out from an upstairs window of the Longstone Lighthouse on the Farne Islands, spotted the wreck and survivors of the Forfarshire on Big Harcar, a low rocky outcrop. The Forfarshire had foundered on the rocks and broken in half; one of the halves had sunk during the night.  Amidst tempestuous waves and gale force winds there followed an amazing rescue of the survivors. Grace Darling played a huge part in this rescue with her father, rowing a wooden boat out into the rough seas to find survivors - you can read the full story here if you are interested.  Grace darling is a true hero, a true legend in my book so I decided to use some free to used images to create this trivet in pyrography.  The images were placed into Photoshop and manipulated until I liked the layout, I then printed the image in reverse and transferred it to my wood piece using acetone.  From there it was out with the pyrography iron and get to burning the wood.  I finished off by stamping then wood burning a few birds. 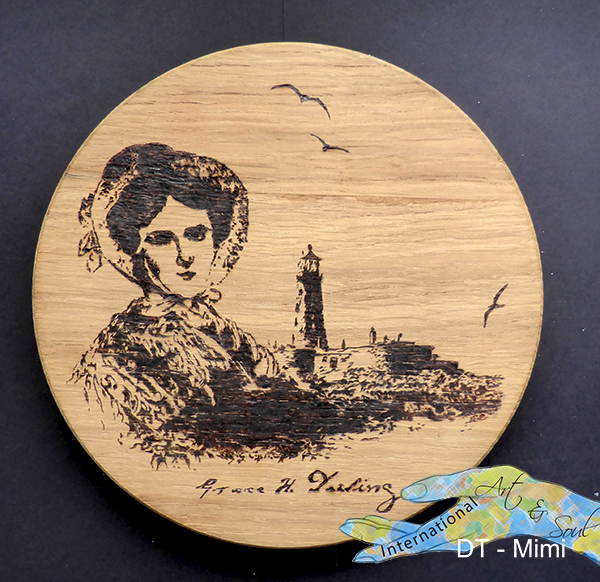