Challenge 104
What's NEW With You

Happy New Year folks and hope you all had a magical Christmas.  We are all set up for the coming year with IKEsART and some awesome challenge themes to keep us out of mischief hahahaha.

Ike's images are available from the IKEsART store and if you don't know her artwork do take a peek, they are super special and cover everything from the totally off the wall to the cute and furry :) :) :)

For this challenge we were given the option of 'What's New With You' and that is such a wide open challenge, everything from celebrating the New Year down to using new items.  I have gone for the new items as hubby treated me to a  TODO machine to add to my craftroom.  I happened to mention one evening some time ago that the one thing I don't seem to have and would be rather useful was a foiling machine.  I was so keen to have one that I had not done any research, it was just something I said and one day would get around to checking out lol.  Anyway, a couple of weeks later a big box arrived at our house with the TODO in - I had to go and do my research as I had never heard of this beauty.  It is really a 4 in one machine able to do embossing, die cutting, letter press and foiling.  I doubt I will be using it for the embossing or die cutting but it is fabulous at the foiling and able to use the different types of foils on the market, the ones that are heat activated and also those that are laser printer activated.

For this card I have followed my routes so to speak and used the image of the Nigerian Lady from the Africa World Series pack - I was born in Nigeria many moons ago lol.  The Nigerian flag is green and white so I used those colours for my card along with the gold foiling for the background to represent the gold which is abundant in West Africa, Nigeria included.  I often wonder what Nigeria would be like without corruption and religious divide- a country so blessed with mineral wealth, gold and now oil, that it should have no poverty at all.  Alas that is not the case !!!!! 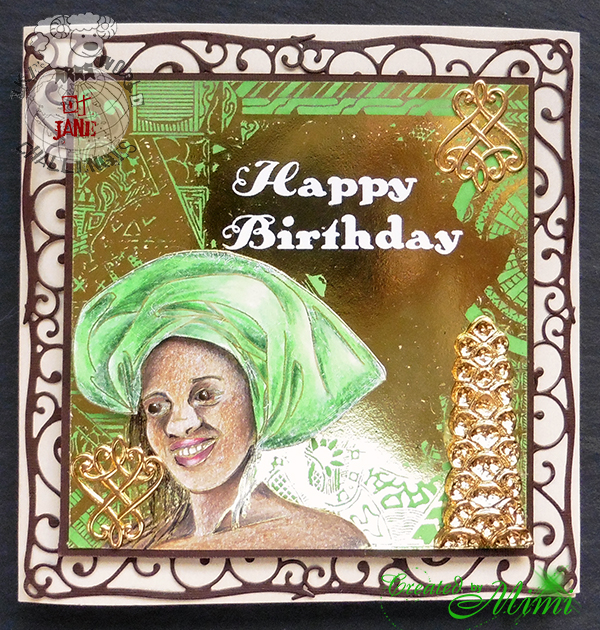 Email ThisBlogThis!Share to TwitterShare to FacebookShare to Pinterest
Labels: IKEsWORLD Ch# 104, What's New With You