Morning folks and hope you are having a fabulous day :) :)

Time for me to share a creation I have made as the Guest Designer for Through The Craft Room Door.  I don't do this often haha but when I do it is such fun being sent an image to work with and not having a choice really gets the brain cells working.  I hope you like what I have managed to create. 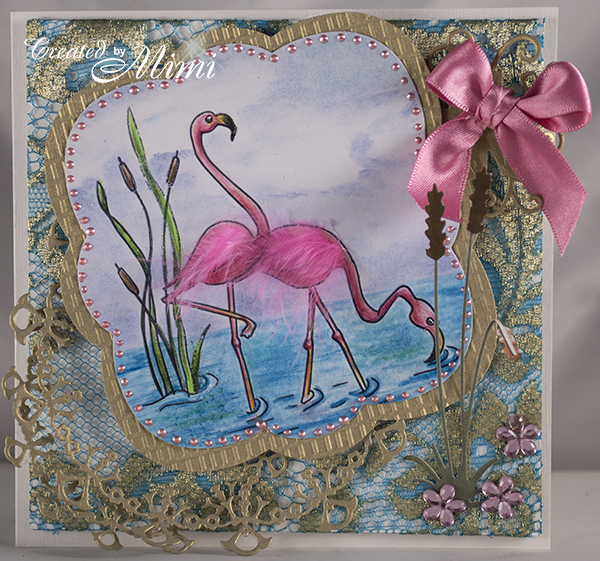 The image I was given to work with is from Digi Stamps For Joy - Flamingo Pair.  I coloured the image with Polychromos for the flamingos, water and bull rushes and Pan Pastels for the sky.  To finish off the flamingos I added some pink feathers - such yummy texture. 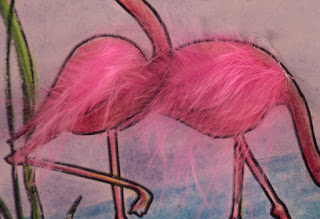 A white card blank was cut and a second mount also in white which I covered with turquoise and gold lace.  Next I used the Tattered Lace Antique Circle die and gold card for the lacy circles.  The image was cut using Sizzix - 657939 and the gold mount below the image too.  This second mount was embossed with a hessian embossing folder by Tim Holtz.  Pink Liquid pearls were added around the edge of the image just to help carry a bit of the pink through the card.  I wanted to add a sentiment but really was not winning so in the end I added a tag which was cut with Spellbinders Ornamental Tag 1 and Papermania Thinking of You stamp which I heat embossed with gold embossing powder. 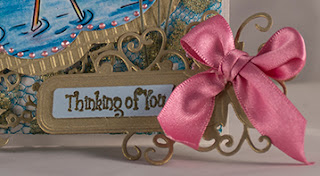 Again to help carry the pink through the card a bit I added a pink bow.  Lots of dimension going on but I wanted a bit more so I used the Memory Box Lavender die and coloured it to look like the bullrushes in the image.  Finally three pink gems and there we are, all done
Posted by Mimi at 6:08 AM

Email ThisBlogThis!Share to TwitterShare to FacebookShare to Pinterest
Labels: Flamingos