Watching TV certainly pays, all those OZ Airport programs had educated me in the 'grief free' entry into OZ, declare everything, no matter how trivial.  I must admit, I filled in the form with a grin on my face, ticking virtually ever box on the form, there was no way I was getting caught for not declaring, especially as the nicotine levels were running on reserve strength. As expected we had to go in the queue for further investigation, taken to one side and questioned - 'What is the food' I was asked, 'Ah, two packs of sweets', next, 'What is the wood?', easy answer "an Ikea picture frame'; I was feeling rather confident, this was a doddle.  Next I was asked 'What are the animal products?' <g> 'Feathers', I replied and that was it, we were allowed into OZ with no case opened, no contents sprawled around the table tops and no camera crews to catch it all on film.  Now the head and body just needed stimulants - coffee and nicotine.  The coffee was easy to sort out and it was one of the best cups of coffee I have had in a long time, car hire next and then the nicotine - Ahhhhhhhhhhhhhhhhhhhhh, thats better.

With satnav sorted and programmed to avoid Toll Roads, Highways and everything else we headed out of Brisbane.  You know what it is like when you are in a new place, all ears and eyes trying to make sense of what is going on. 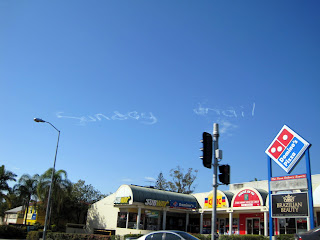 I had to laugh when I saw 'Sunday Mail' written in the sky, I thought that sort of thing only happened in America <g>.

Road works, closed roads, grrrrrrrrrr problem after problem but we eventually made our way out of Brisbane and heading in the right direction for Wollongbar, not a long journey, only a couple of hours (or so we thought).  The two hours turned into six hours (due to the settings on the satnav we took the scenic route), bless Alan, I don't know how he kept going.   The drive was a feast for sore eyes, oh so beautiful, the trees are something else, tall, lean and every shade of green imaginable.


Tree line roads, hair pin bends, the sounds of birds, so much for the eyes and ears to feast on and no sand <g>.
We were just about ready for a coffee so eyes were peeled and the nose started sniffing for the aroma that indicated caffeine replenishments were close by.  We found this cracking road side cafe at Grevillia.  Coffee on order and I requested as a joke a couple of matchsticks to hold the eyelids open.  I have now learnt that I will be taken literally here, my coffee arrived with two matchsticks on the side <g>.  There was a very friendly white bird called Bobby who was rather partial to having his head scratched.
A couple more hours of driving and we reached our destination and what a welcome sight, The Garden Inn at Wollongbar.  I recommend this place to anybody, the couple who run it are super, breakfast is brought to you in your room every morning and is freshly cooked and it is so peaceful (apart from the kids in the next door house but in fairness we have only heard them screeching once).  Oh the bath, what a bath, and what a welcome sight at the end of our trip to get here.


OK folks, that brings you up to date for the day we arrived.  We have to check out soon and head off to Skippy's so I am going to sign off for now.  Will post Day 2 and Day 3 ASAP.
Posted by Mimi at 11:45 PM