What a way to wake up, tucked up nice and snug under canvas with the sound of waves in the background.  Alan and I are not highly motivated this morning, more like tortoises taking life easy.  We have major plans for today, shower, wash hair and find another camp spot, I think we can accomplish this.  Priority is a cup of coffee to start the morning then contemplate our next move.

Right, the shower is hanging up and as there is not much sun to heat the water inside we have cheated and boiled the kettle.  My hair is revolting, as the shampooing proved.  Showers accomplished it is time for another cup of coffee, it is about noon now and time to think about moving on.  Notice I said, think about!!!!

We are going to head back south and then turn east towards  The Alexander Morrison Nature Reserve which is full of wildflowers, hopefully there will be some photography undertaken.  We have been reliably informed by one of the travel books we have that we can camp there if we go chat nicely to the Ranger.

On route we stopped at a petrol station for a ham and cheese sandwich and yet another cup of coffee.  As I opened Winston's emergency exit a moth flew in and landed on my shorts, he was so obliging and sat there for ages while his photo was taken for memories sake. 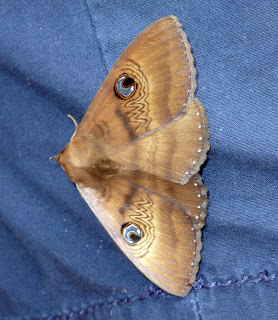 On sale were some fly nets to go over your hat, yes a must to be purchased.  Alan has already gone through one can of bug stray as the flies are bugging him to bits.  I have to agree, they are somewhat annoying, reminds me of visits to the local Masai homes in Kenya but no where near a smelly. 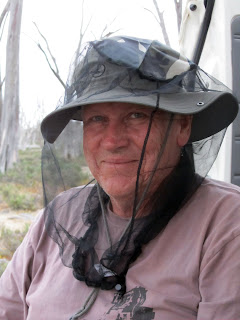 OK, 2:00 p.m. and we are on our way for the short hike to the Alexander Morrison Nature Reserve.  Oh dear, a few flowers to be seen but still very cloudy and no chance of photos yet.  After exploring many tracks on the hunt for the Ranger and not finding him or his house or any signs he exists we have found one possible camp site for the night with signs only saying No Fires and No Shooting, I think we can be cheeky and plead our ignorance if spotted.  Anyway, it is still early, and there is another nature reserver bordering this one called the Capamauro Nature Reserve.  We are guessing the same rules regarding camping will apply here so it is worth check out.  There is a lake in this reserve and that normally means birds and other wildlife will be around.

OOOOOOOh lookie here, tracks that have not been used in ages, a lake and birdsong.  Time to set up camp for the night.  Alan and I are now in a pretty good routine, Alan sorts the tarpaulin out to give us some shelter and gets the kettle on the boil for a cuppa while I sort the bedroom.  What fun creating a bedroom in Winston, undo the catches on the outside, climb into Winston and push the roof up, not in the least difficult and voila, I almost have the room completed.  Next step is to pull out the three wooden base supports and slot them into place then throw up the thin mattresses, sleeping bag and pillows.  There done and now time to sit down and enjoy my cuppa. 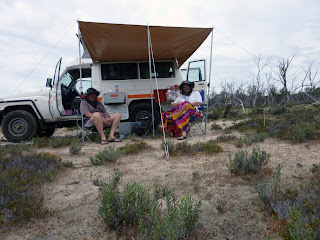 This is a very strange lake we have found, the trees are all dead but don't look like they have been burnt.  There are a few birds around, and I mean a few, about 4 that we can hear calling to each other, no birds fishing.  We are beginning to suspect something odd has happened here but not sure what.  Just to be on the safe side we will not be using the water in the lake for anything but to look at.

Tonight I have a gourmet three course meal lined up, satay noodles as an entree, reheated lamb burger buttie for the main course and an orange for desert all washed down with a Singapore Sling (thanks Lyn).

Now that dinner is out the way and another cuppa is brewing it is time to get the laptop out and watch another movie.  Oh no, this one is vampires, I am not watching that.  Thankfully Alan has quite a few movies and found something that was watchable, I think it was called 'The last 3 Days', and by the way, it is raining again.

Now maybe you would like to hear my saga.  After yesterday and the whatevers that attacked my feet while checking the sandy path for a place to sleep, today I have been soaked.  Alan managed to get himself all snug in the corner by the cooker and I was just under the tarpaulin but dry.  As the rain filled up the top of the tarpaulin Alan reckoned it was a good idea to reduce the weight and prodded the side to let the excess water escape - all over me.  One drenched side of chair, one drenched  arm and all materials covering it and now a continual drip on my head and down the back of the chair.  Time to find some plastic and return to watching the film as a soggy viewer.

Yes, it is still raining before you ask.  Not having seen rain since my last visit to the UK where it rained for all but 5 days I should be enjoying the experience but no - I don't like rain.  It is off to bed now.  Last night in bed, although comfortable was a little hard so tonight we have tried to make it more comfortable by blowing up the air bed and throwing that in too.  Fingers crossed for a 5* sleep.

As you can see by this blog today has not been a day for photos but we do have a sunset for you which Alan captured.  Good night. 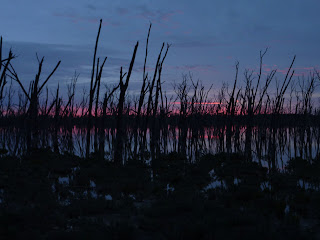