Up bright and early in our very peaceful location a sudden craving for 'bacon and eggs' took our fancy.  Now, I have never cooked breakfast in 31 years of marriage but today I broke the golden rule - saying as we are on holiday!!!  Before you get any ideas, no, this will not be a recurring event <g>. 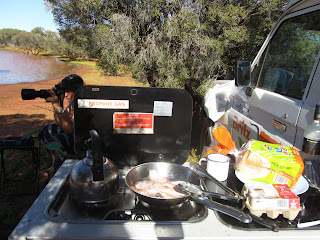 Such a glorious morning we sat for ages, looking at the photos we took yesterday, sorting out images for the blog and getting everything up to date, resized, labeled etc for a quick upload if I come across another net hot spot.  It was around 11:00 a.m. before we got round to packing Winston's insides with our belongings and starting today's adventure.  We had a little plan ahead of us - Kookynie is on a dirt road in the direction we are heading as is Niagara Dam.  After visits there we headed to some very strange rocks west of Menzies (Wailing Rock and Ghost Rocks - got to check them out), and finally a real touristy thing for us to do <g>, the salt flats near Menzies are home to 'Inside Australia' - Antony Gormley Installation at Lake Ballad, 51 sculptures spread across the dry salt bed.

First stop, Kookynie, an almost abandoned town yet again.  This one has the old hotel, called the Grand Hotel, the only building made of brick still standing which was built in 1902.  Sounded like a great place for a shandy <g>.  On drawing up to the hotel I had to laugh, it was for sale and the company handling the sale was called 'Hooker'.  Ok so why do you think I am laughing, the old map says the site next to the hotel used to be the red light district run by a Japanese man many moons ago. 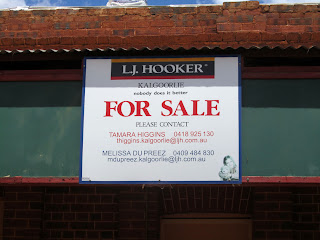 Now it is hard to know where to start, it has been a very strange day, not with the photography but with the people we have met.  OK, being sensible, I will start with the beginning. As I mentioned earlier, our first stop was Kookynie to visit the hotel for a shandy.  While there a couple of prospectors came in for their regular tipple and we got talking to one of them.  He asked us if we were here prospecting for gold (fat chance after last years attempt at hunting for the precious metal), so we told him no we had tried that and fossiking last year.  Our story of our visit near Emerald and Ruby for sapphires last year let him to dive into his pockets and produce a lovely sapphire, he knew the area we had been in.  The conversation moved back to gold prospecting, his pastime now and we mentioned about Old Halls Creek, where we had accidentally been traipsing around this place and come across a building which sold ice cream.  On chatting to the owner there for a long time he asked us if we would like to visit his swimming pool - 18 km in that direction!!!! (Blog post story can be found on Sept 29, 2010 if you would like to go back and read the story, it was a magical day for photos and one we will never forget).  OK, now back to today, it turns out this guy we were talking to whose name is Dougie, is the cousin of Martin who we met that day.  To think Australia is so big and we bump into two men, over a year apart in time and 2000km in distance and through general chatter discover their relationship seems too incredible to be true, but it is. It quite made my day, must be that lucky bird poop that landed on me the other night :)


Saying our goodbyes we moved onto Niagara and Niagara Dam.  Niagara was super strange, one business set up and a great big grave yard, the place obviously abandoned many years ago but no homes remaining.  We had a look around the grave yard, most of the graves had not names or other information, just piles of stones marking the last resting place of former inhabitants.  Sad to see so many small graves but times would have been hard in those days.  A couple of the last resting places had head stones and the dates showed most of the passing of the residents was at the turn of the twentieth century, 1902 to 1905. 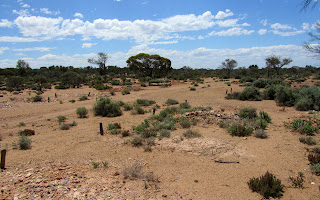 Moving on now to Niagara Dam, interesting to see but not a stopping place for us.  The dam was constructed to provide water for the steam engines and rapidly developing railway north of Menzies.  There were a couple of campers there and after a few photos of the area we left them to enjoy their time without us. 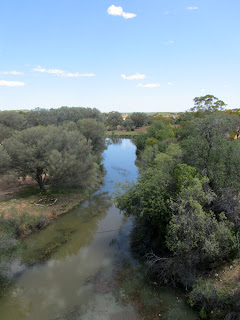 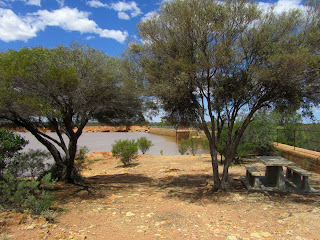 Our next stopping place was Ghost Rock, or at least that was the plan, alas we drove straight past that without seeing it.  Oh well, we were not meant to find that one.  Now for the Antony Gormley Installation at Lake Ballad.  Super strange place.  We parked Winston under a tree to keep him cool and headed down to the salt flats which were rather slippy to check out the metal sculptures.  We could not make head nor tail of this, our question of WHY? - to create this artwork which probably cost a fortune along with the beautiful camping ground with toilets, fresh water supply tanks etc in the middle of nowhere.  I have not checked out who Antony Gormley is but there is a little voice at the back of my head which is saying 'Angel of the North' and some iron statues on a beach on the west coast (Crosby Beach near Liverpool) which a very good friend of my showed me photos of when she visited them a few years ago. 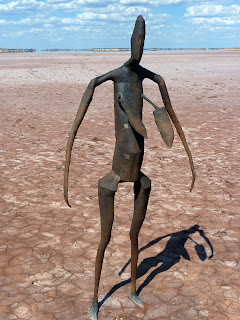 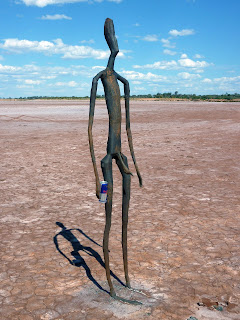 Time to move on to what we read on the map as Wailing Rock.  As we were getting close to Wailing Rock Alan saw a track to fresh water springs on the sat-nav, this needed checking out first.  Now this time the sat-nav was lying, the biggest lie it has told so far.  We parked right on top of the fresh water springs, got out of Winston, walked and walked and walked, checking everywhere, not a drop of water to been seen, no birds to indicate water was around, just some very old tin cans, and the ever present brown beer bottles.  We have a feeling somebody has pinched the water for their homestead!!!! Or maybe, there has just not been enough rain here for a very long time the water is hidden well underground. 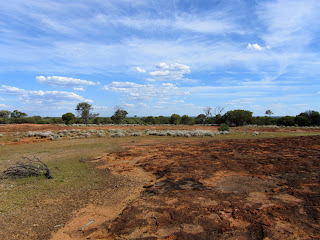 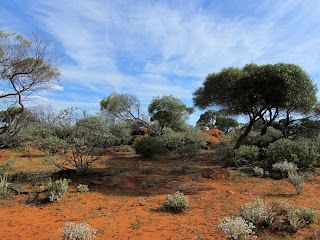 Very disappointed we climbed back into Winston and went in search of Wailing Rock - sounds like an interesting place to camp the night, could be kind of spooky <g>.

Wailing Rock - ummmmmm, well, what can we say.  Wailing Rock turned out to be Walling Rock and somebody's homestead, this flipping small print on maps is not working for us is it <g>.  With the day drawing to a close and no home for the night we decided to return to Antony Gormley Installation at Lake Ballad and camp in an art gallery - just for something different.  Now this was meant to be too, we had only been there an hour or so when a pick-up pulled up beside us and two blokes got out to look at the statues.  One of them came back and started chatting to us.  He was indigenous to this area and when we asked the question WHY? we got the story.  It turns out this is a very special place to the Aborigines who tell the story of the Seven Sisters which are stars.  The Seven Sisters visited this place a very long time ago, they were beautiful and so pure.  One of the Aborigines (they were a small people in structure then) rather fancied one of the Seven Sisters and tried to catch her and have his way with her.  The other six sisters returned to the sky but the seventh sister did not keep up with them.  The Aborigine grabbed hold of the seventh sister and she said, "let me go, let me go", which he eventually did.  She return to the skies and if you look at the group of stars you will see six forming almost a circle and the seventh just below them.  There is a rock, a natural one, that is said to be the Aborigines head coming out the sand gazing up to the Seven Sister with longing. 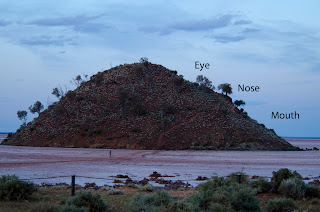 So back to the statues, this guy, just mentioned we may have heard of the artist as we were from the UK, he is the one who created 'The Angel of the North' - yep we know that one only living about 70 miles away from it - it looks to me like an old aeroplane sticking out of the ground but I didn't mention that!!!!!  Antony had come to Western Australia looking for a place to put some more statues and on flying over the salt flat here had thought this was the perfect location.  With it being a sacred place, a place of peace and no bad vibes, he spoke to the Elder of the Aborigine people who told him the story of the Seven Sister and also gave him permission to place his works of art.  Each of the statues is based on a then resident of nearby Menzies along with a few gold prospectors and a couple of people visiting from foreign lands.  As the Aborigines in the story were small in structure Antony reduced the size of each person by about a third, using a laser measurement system so we were told. 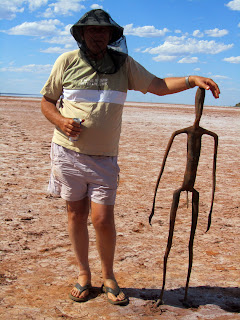 We read that to get the best pictures of this place you need to be here at sunset or sunrise.  OK we are, the sunset started and we waited for the rock head or the statues or the land to reveal their beauty with the last of the suns rays for the day.  That didn't happen and we had pretty much given up when suddenly the sky behind us turned from washy pink streaks to vivid red, oh so beautiful.  So on thinking this blog would end without a sunset picture we have been proved wrong <g>.


So here you are, to end a very special day for us yet again in so many ways - a sunset. 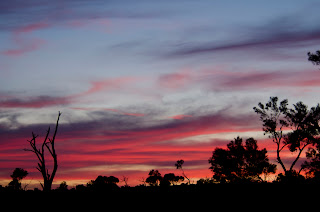 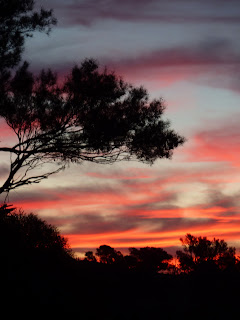 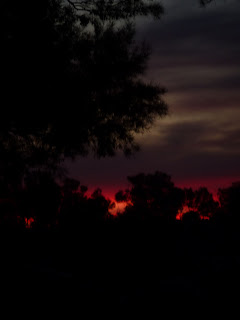