Those dreaded potholes, think it is time for Road Works Reg to get to work fixing them hahahha. 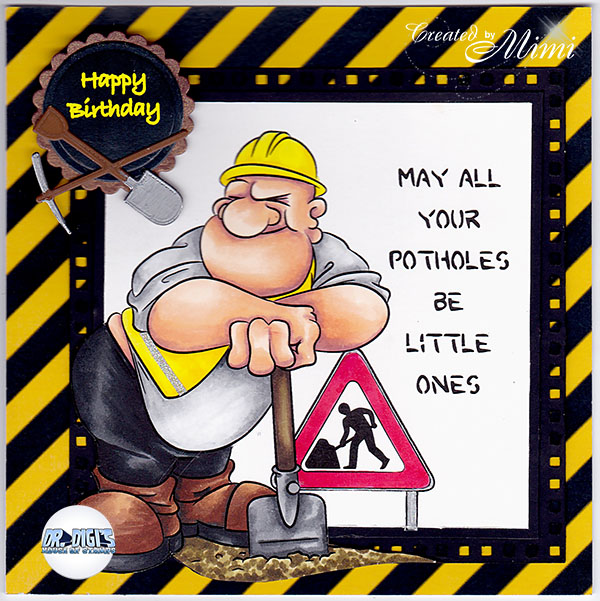 How cool is this image, Road Works Reg from Dr.Digi I just love him, fun to colour and awesome theme.  You know when you have an idea in your head and somehow things evolve in a different direction throughout the creating process, well that is the case here.  I started with the digi and sentiment and build the card around that.  Initially I was going with a smaller digi size, (this size is by accident and I love how he is stepping off the white background) and creating some sort of construction background but my head was getting so confused I put that plan in the bin and went with the yellow and black 'warning' background instead. I printed Road Works Reg along with the pothole sentiment and once coloured cut my white square area with the exception of the bottom half of Reg which I cut with scissors.  I then created a simple diecut to go behind the image layer using SCAL and my die cutter.  The background paper was designed on Illustrator, nice and simple lol and the sentiment was also printed digitally as I could not get my yellow ink to be vibrant enough on black card.  Hubby then was called into action and I asked him to make me something on his new toy - a 3D printer so with the help of a bit of clipart hubby made my spade and pick-axe for me in brown and I used oil based paint to colour the silver bits.