Hello folks.  We have another challenge at One Stitch At A Time so how about popping over to see all the fabulous creations by the design team.

For this weeks design I worked with the image chosen by my teamie Deborah, 'Boo Boo Bee' by Stitchy Stamps.  Now what could I do with this, a get well card is the obvious but time to think outside the box I think.  I am not really into 'cute' at the moment so I went with an 'off the wall' idea.  With all the celebrations over Christmas and New Year I suspect the odd person or two had one to many of the tipsy bevies to drink and from there my idea was born. Poor Boo Boo Bee has obviously been in the wars, now we don't know why but maybe he was one of the ones who was a bit the worse for wear due to over celebrating lol.  I am not really sure is 'getting plastered' is a universal term for being drunk or just a British one hahahaha but my Boo Boo Bee certainly got plastered!!!!!!!!!!  After one to many he fell over and broke his arm, manged to get up but staggered into a lamp post breaking his finger and bumping his head.  Seeing stars but not feeling much pain he pulled himself together and limped off, missed his footing falling off the walkway and ended up rolling down a hill into a rather large bush which thankfully stopped him going any further.  Alas, when he emerged from his unconscious state he found he had broken another arm and accumulated several more cuts and bruises.  With luck his mobile phone was working and he was able to phone for the ambulance which arrive, bundled him off to hospital where he was duly plastered again <g>.  Talk about bad luck, as he was leaving the hospital he stood on a thumb tack which got stuck in his foot - well he should have been wearing shoes.  SO all I can say is hoping Boo Boo Bee thought "getting plastered was worth it'!!!!! 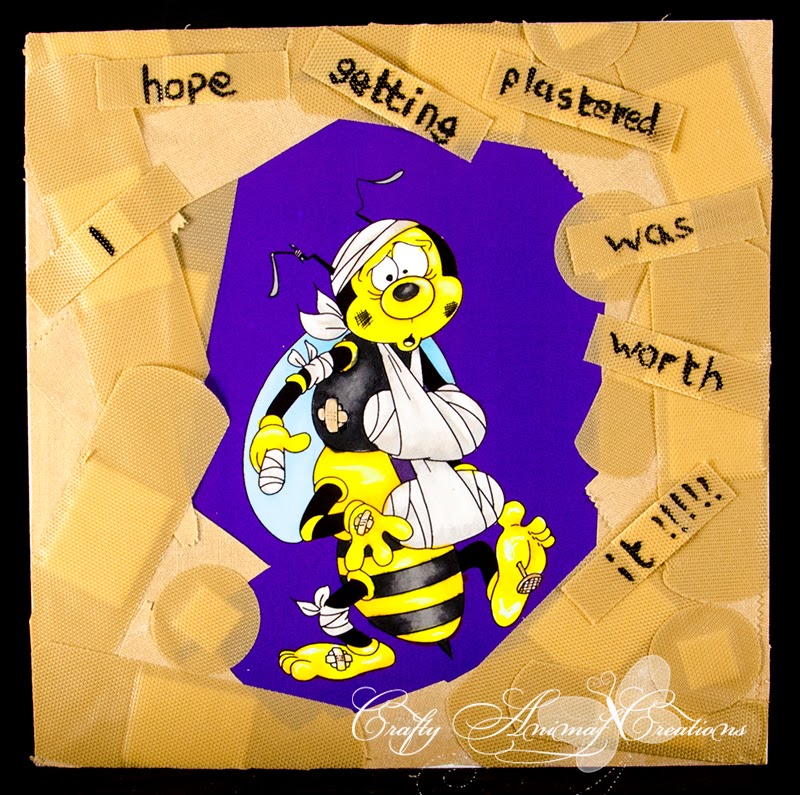 I am entering this card into the following challenges:-

Thanks for looking and hope you have a happy crafting day:)

Email ThisBlogThis!Share to TwitterShare to FacebookShare to Pinterest
Labels: 198, Anything Goes, OSAAT