Now dinner is done and dusted I can upload my second and last card for the day.  It was such a rude interruption to have to vacate my chair and occupy the dreaded kitchen but I really should not complain as hubby is so good at taking his turn <g>

This card was specifically designed for the Delicious Doodles challenge - Make it Fishy.  OK, I know a dolphin is not a fish but it does swim in the sea so is close enough I think.  I was itching to make this card all day after seeing the challenge last night and just having to go buy the digi I used which I have had my eye on for some time, it is just so goooorrrggeous don't you agree.

As usual, I really wanted to show the digi off and had thought of using some wonderful water velum I have stashed away but then thought, material.  I have not made a card using material instead of DP for ages and knew I had what I thought would be perfect in my drawer.  The material was a scrap given to me by a friend (also in four more colours) which she bought of an event here in Abqaiq, Saudi Arabia, to decorate the tables.  I tried to pucker it up to make it look like the motion of the sea but by the time I had added the text border, digi and embellishment it kind of got hidden, never mind, I know it is there and you can feel it in the real world. 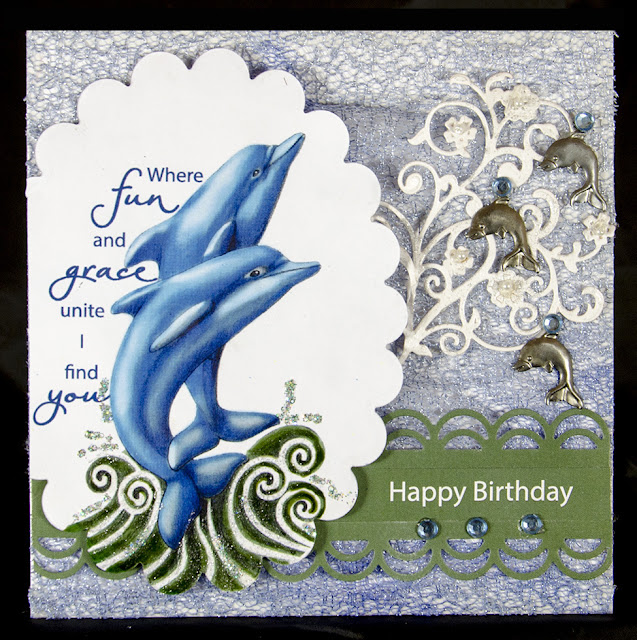 Recipe:-
I would like to enter this card into the following challenges:-

Thank you for stopping by and happy crafting.  Hugs Mimi