I love a card with a story, do you?  This card has a great story and I don't think my grandson will forgive me for telling it to the world :)  My daughter and grandson were visiting hubby and I in Saudi for a few weeks and while here I treated myself to several more Mo's Digital Pencil digis, they are just so super cute and fun to colour.  Taking a shine to Two Toby I set about colouring him in and as if the image had given my grandson an idea he decided to throw a tantrum, a good one too, it last about 15 minutes and amongst all the other animal noises 'Mummy I want' was often repeated.  Fun over and the little person settled down (not getting what he wanted I should add) and the day moved forward without any further dramas.  I decided at that point the card being made with this image would have to be my daughters Mother's Day Card.  A couple of days later, when time permitted, I set about making the card and would you believe, another tantrum from his excellence.  Bless his cotton socks, only two tantrums in three weeks, not bad going.

For this card, I designed the room for Two Toby to throw his tantrum in and cut hand made paper I picked up somewhere for the walls, it has such a great texture.  For the floor I used thin cork sheet which gave, again, the perfect texture.   Window blinds were coloured and then embossed with clear embossing powder to give a plastic feel, the punches came out and mini transport ones selected to punch the vinyl which were stuck on the walls.  I cut the word Mummy out of vinyl on my Black Cat (no other word would do would it <g>) and once the image had been placed on the card with foam tape I stuck on the text.  The caption was printed and stuck to the card and to finish off a bit of yellow ribbon and a bow. 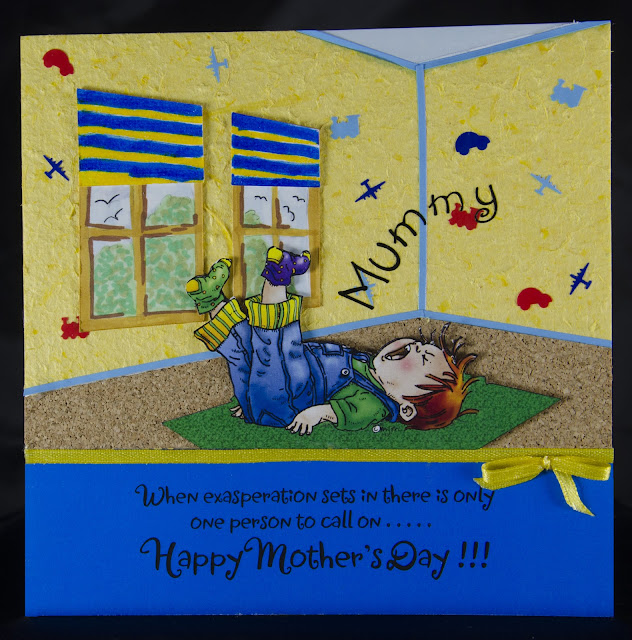 I would like to enter this card into the following challenges:-