Time for a new challenge at Aurora Wings and this month it is a SKETCH challenge.  So here we go with the sketch we would like you to use and we can't wait to see what you come up with and how you interpret this challenge :) :) 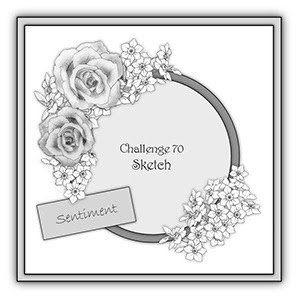 For my DT inspiration to get you in the mood I have used the image Himalayan Blue Poppy available here from Aurora Wings Digital Stamps and also from the Etsy store. 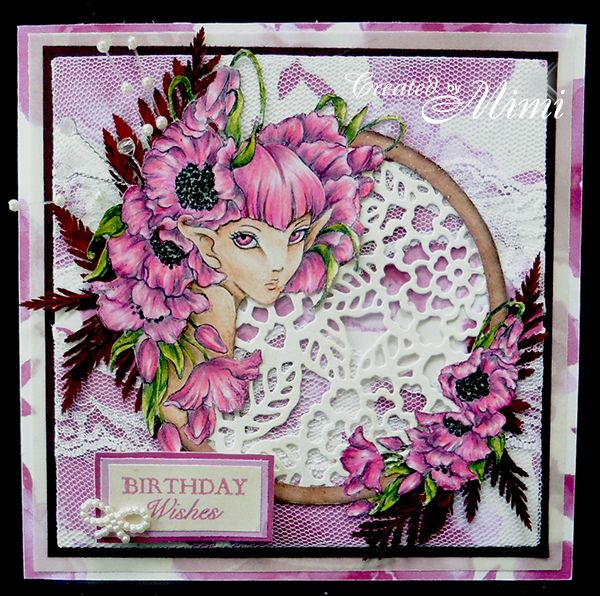 I chose to use the Himalayan Blue Poppy image to decorate the outer side of the circle instead of putting and image in the circle and using other embellishment on the outside.  The image was flipped so it fitted beautifully on the top left of the circle and for the bottom right I removed parts of the image so I was only left with the flowers and reduced the size.  Once that was done I printed the two bits ready for colouring.  Usually I would colour and then fussy cut but this time I was a bit concerned about the fussy cutting so did that first.  Then the fun and games began as seems to be a common trend with me at the moment.  I coloured most of the image but did not like what I had done grrrrr, so printed and cut again ready for a second round of colouring.  Now the second attempt was much better and I was half way through it when I got sidetracked and started thinking about the background.  My plan was to rubber stamp a poppy background in colours to match what I was using (fatal mistake).  I hunted through my stamp inks, nothing suitable there, Promarkers possibly but not what I wanted then I remembered I had some Aqua Tints from Crafters Companion and there I found the perfect colour.  Time to play and see what I could come up with and my stupid hand knocked over the bottle of ink and I think you can guess where it went, all over the half coloured image which I had not moved out the way - I could have cried.  Time to leave the craft room after wiping up all the spilt ink before I did something else rather stupid.  I left things for a couple of days and rethought what to do with the background - that ink went back in the drawer and won't be seeing the light of day for a wee while hahaha.  I ended up using a poppy design paper which I converted to greyscale in Photoshop and then overlaid a colour I thought would work well, hurray, got it pretty good first time.  Next was to print and fussy cut the image for the third time and get the colouring done.  All going well so far so fingers crossed it would continue and it did, no more accidents.  The images were coloured with Polychromes and completed with Liquid Pearls in the centre of each of the flowers then a blast of Crafters Companion Spray and Shine to give a nice sheen. To finish off the card I die cut a background flower die I have and trimmed it to size to fit behind the inner circle, lace was added to the top background poppy layer and this was mounted on dark maroon, then cream vellum and added to the card base.  Behind the image I added some maroon dried leaves, pearl sprays and a glass bead spray.  Finally I stamped the sentiment and added a wee pearl bow to complete this project.

I am entering this creation in the following challenges:-