Challenge 73
TAG you're it

This tag already has a home :) it will be attached to a wee gift I have for a friend who stepped in as foster mum to my horse while I was in the UK.  He (my horse lol) was on deaths door when I bought him in November last year and has given me the most incredible journey nursing him back to health with the help of an awesome team of friends.  So many challenges, one after the other but now we are on the final leg before he becomes a true horse in his own right and able to join the pack of other horses at the stables instead of just being surround by his human pack.  Jay, when I got him, was near to starving and had a nasty abscess on his hind quarter which took two months of constant cleaning and draining to clear up - that was after the vet released it and over a pint of puss literally came out with such force it sounded as if he was peeing.  The abscess had obviously never been treated and was deep within.  While that was clearing up another abscess developed inside his hoof, again the remnants of an old one that was never treated and was constantly reinfecting.  3 months of poulticing, cleaning, treating etc. eventually cleared that up but one of the eruption points was on the coronet band (where the hoof meets the hair line) so his hoof had two large holes in in which we have had to wait to grow out and keep our fingers crossed the hoof would hold in tack long enough that when it did break it was below the white line where the blood supply is.  All is well that ends well the hoof has now broken in a safe place and not worrying him at all, we have another abscess near where his balls used to be but quick treatment is working well and again this is not worrying him.  He has now put of weight, has an awesome shine on him and his heart has the biggest amount of love which he gives so freely even though humans have treated him so badly in the past :) :) :) 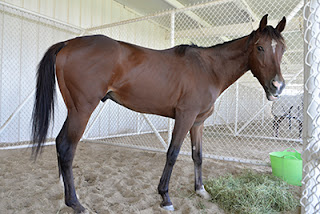 and this was him 2 months ago as he really turned the corner :) - not quite so skinny :) 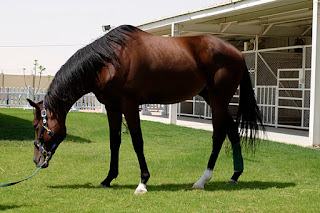 Email ThisBlogThis!Share to TwitterShare to FacebookShare to Pinterest
Labels: ch73, IKEsWORLD, tag you're it