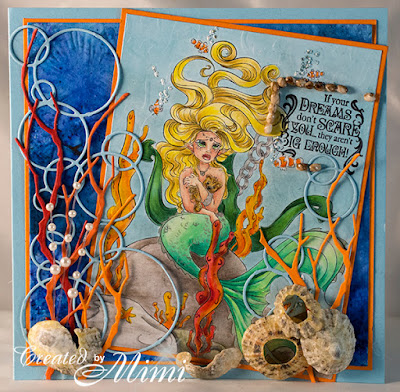 There are times when you colour an image and are just not happy with it and this is one of them for me.  I think it is because with the way she has turned out she looks so scared.  However, I tend to go ahead an make a card or something with my poor colouring, maybe I should throw it away and redo it lol but I enjoy the challenge of trying to bring the disaster into something.  In this case I had the perfect sentiment and, for me fitted my coloured image perfectly.

So to make this card I coloured the image with Polychromos.  The background was coloured with Pan Pastels and then I used my embossing folder and hammer so I could emboss only the background and not the image.  For my base mat I embossed a piece of card with a Spelllbinders folder of shells and then used a few shades of Brusho and spay water to get lots of texture and movement.  Both the image and the base mat were mounted on orange card to tie in with the underwater plants.  Next I used a tree branch die from Memory Box for more seaweed and the Large Ringlet die also from Memory Box for bubbles.  To finish off I added a few pearl strands, some small bead shells around the sentiment and then some very precious shells collected by my daughter and grandson on a wee outing they had walking along the beach.